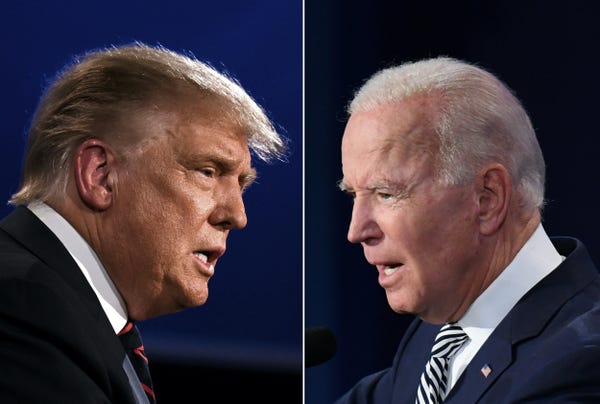 On early Wednesday morning, hours after polls closed in most states, President Donald Trump stood on a podium in front of his supporters and called it "a fraud on the American people" that many ballots in some states remained uncounted.

He can blame the Republican-controlled state legislatures for that.

All three of those states prohibited election officials from processing absentee ballots until the day of the election, or in Michigan's case, the day before, according to the National Conference of State Legislatures.

Trump narrowly won these three states in 2016, and they were among the eight critical states that had not declared a winner as of 9 a.m. ET Wednesday.

While these states all have Democratic governors, their Republican-controlled state legislatures have clashed over election rules.

They resisted calls to give officials more time to process ballots, which was meant to help them report results as quickly as possible, Panetta reported last month.

In the Wednesday morning press conference, in which Trump claimed victory in the election, he said that he was prepared to celebrate on Tuesday night when "it was just called off," referring to the counting of ballots.

"We were getting ready to win this election, frankly, we did win this election. Our goal now is to ensure the integrity of the good of this nation," Trump said. "We don't want them to find any ballots at 4 o'clock in the morning and add them to the list."

But election officials around the country had been warning of the the likelihood of a drawn out process for months, and it's why some pushed back against the rules that limit counting ahead of time, also called pre-canvassing.

"A key reason to permit counties to conduct pre-canvassing is so that the county does not have its attention divided on Election Day," Forrest Lehman, the Director of Elections in Pennsylvania's Lycoming County, told reporters in an early September press briefing.

"Every county is responsible for an in-person voting operation where I think we can all reasonably expect pretty high turnout — any county would prefer that we not try to conduct canvassing of mail ballots at the same time."

Election experts previously told Insider that ensuring the integrity of voting in the US would mean giving election workers the time they need to count every ballot.

"It's more important to ensure that every vote counts than knowing the results on election night," Karen Hobert Flynn, the president of Common Cause, told Insider earlier this month.

"We do expect that part of [Trump]'s playbook is to question the integrity of mail-in voting, which we know can be done safely…we need to be giving time for those votes to be counted."