The Taliban sent a signal they were coming for me – a bullet-ridden body on my doorstep: The Mail on Sunday’s Afghan translator gives his heart-stopping account of escape from Afghanistan after arriving in the UK

Bakhtiar Shoresh realised the Taliban were coming for him when he received ‘a signal’ three months ago. Chillingly, the ‘signal’ was the bullet-riddled body of a young man dumped at midnight on the doorstep of his home in a quiet Kabul suburb.

Over the previous 20 years, Bakhtiar, 46, worked as an interpreter for The Mail on Sunday and many other Western media organisations. British security companies in Afghanistan also benefited from his expertise and before beginning a Masters degree in Business Administration last year, he was the Kabul representative of a UAE company manufacturing armoured vehicles.

If, as widely believed, the Taliban have a hit list, he was surely on it – and more than likely, he adds with a mordant laugh, nearer the top than the bottom.

The man left slumped against his front door was a stranger. ‘I hadn’t heard any shots – none of us had – which makes it even more clear in my mind that he was killed elsewhere and brought to my house as a warning,’ says the father-of-four.

Fears about his safety intensified in the following weeks as he began receiving sinister phone calls. ‘They said things such as “We know who you are” and sometimes they were even more threatening or else were just silent. I knew that we – my family – would have to leave Afghanistan, our homeland.’ 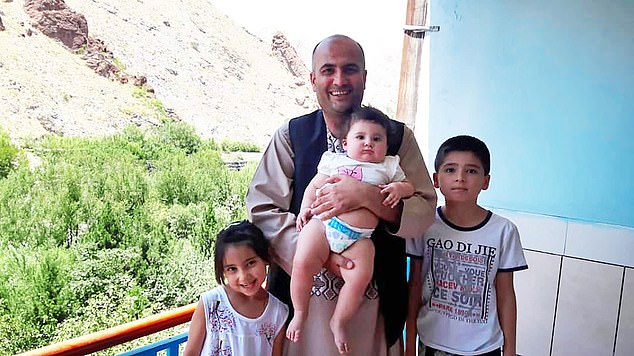 Over the previous 20 years, Bakhtiar, 46, (pictured) worked as an interpreter for The Mail on Sunday and many other Western media organisations

Today Bakhtiar, his wife Qudsia and their children, aged between two and 14, are safe in Britain, quarantining in a hotel near Heathrow after a dramatic escape. It followed a desperate appeal for help to this newspaper and months of negotiations.

The family got out with only hours to spare. Last Thursday, the day after he landed in England, also accompanied by his three younger sisters, a suicide bombing at Kabul airport killed 182.

Bakhtiar knows he is lucky. His voice breaks when he recalls the moment – just after 5pm last Monday – when he double-locked the front door of their comfortable three-storey home, looked over his shoulder for the last time and hastened his family into two taxis waiting to take them on a perilous seven-mile journey to the airport.

For years he saved to buy the house – along with a Toyota Land Cruiser he left on the driveway – but he fears both will fall into the hands of militants. Infinitely more painful, he left behind family photographs and many other treasured possessions. ‘The man from the British Embassy said to take just two sets of clothes each. There was no room on the plane for anything else,’ he says.

But ever optimistic, he counts his blessings. After all, there were many times when he thought he would never leave with his life. Whenever he ventured out to drive to the market or visit friends and family – always during the day, never at night – he sensed he was ‘constantly under surveillance’.

In desperation he contacted everyone he knew in the West, including journalists in Canada and the US and The Mail on Sunday’s former foreign correspondent Barbara Jones, with whom he worked in Afghanistan after the September 11 attacks. Jones and MoS managing editor Robyn Kelly pleaded his case with the Foreign Office.

Back in Kabul, Bakhtiar and his family prayed, waited and watched with dismay turning to dread, the Taliban’s lightning offensive, which saw entire provinces topple like dominoes. Like everyone else – not least Western intelligence agencies – he wrongly assumed that Kabul wouldn’t lay down quite so easily. That it would eventually fall, however, he was in no doubt. 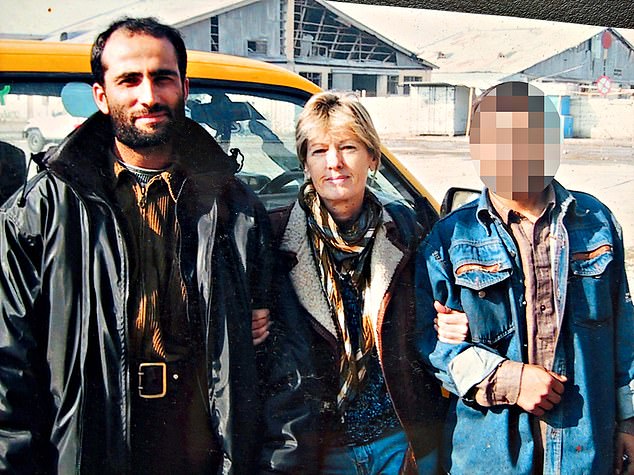 Today Bakhtiar, his wife Qudsia and their children, aged between two and 14, are safe in Britain, quarantining in a hotel near Heathrow after a dramatic escape (pictured with  Mail on Sunday reporter Barbara Jones at Kabul airport in 2002)

When the Taliban poured into the capital on August 15, Bakhtiar watched on television as the events unfolded outside his home. ‘It was so hard explaining to the two older children – my son who is 14 and my daughter, 11 – that it was more important than ever to leave,’ he says. ‘They were sad, of course. All their friends… all that they have known. But they were both so good about it. My son looked at me and said, “Dad, don’t worry, we know it’s not safe for you. We are with you.” ’

Three days after Kabul fell, the Taliban stepped up their search for those who worked for Nato forces or the previous Afghan government. They eventually descended on Bakhtiar’s neighbourhood where he was alerted by children playing football in the street outside his home. ‘The Taliban are going door to door,’ one boy cried.

Bakhtiar slipped out of his house and watched from a safe distance as the militants drew nearer.

‘Suddenly, when they were just two doors from my house, they turned back for some reason and went off,’ he says.

On Monday last week, with hope ebbing away, he received a call out of the blue from a British Embassy official bearing joyous news: an offer of relocation to England. Visas for his entire family appeared in his email inbox minutes later. But they had to move fast. There was a hastily convened gathering to say farewell to relatives and close friends which involved ‘many hugs and many tears’.

Half an hour later, their taxi slowed to a halt at the first of five Taliban checkpoints. Sitting in the front passenger seat, Bakhtiar turned and squeezed his wife’s hand but said nothing.

He wound down the window and delivered the story agreed with his family. It was simple: they were going to stay with his uncle outside the city. The Taliban official seemed uninterested and after a few basic questions, waved them on their way. It was the same at the next checkpoint, but arriving at the third filled them all with dread. 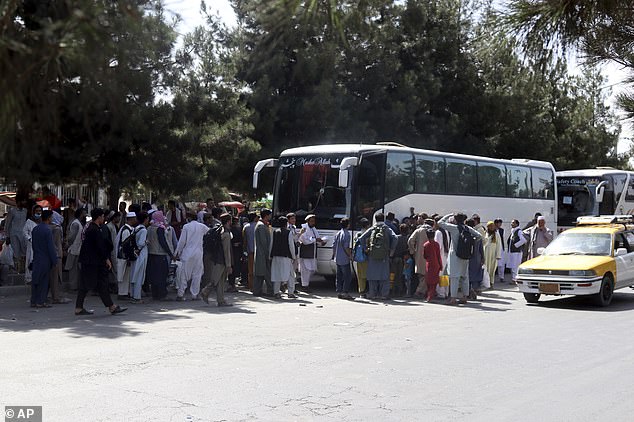 Despite the risk of another terrorist attack, hundreds desperate Afghans trying to flee Kabul were seen getting off buses outside Kabul airport. Their hopes are fading fast as the US and its allies are packing up their rescue operations ahead of the Tuesday deadline

‘This time they were Taliban special forces, dressed in black, even their faces were covered by black scarves, and they carried American M4 assault rifles,’ recalls Bakhtiar. The questioning was more intense and both cars were searched. Eventually, they were allowed to pass.

At the next checkpoint, a mile or so from the airport, Bakhtiar changed his story. It was now obvious where they were heading, so to claim otherwise would be foolhardy. He told the Taliban official they were British nationals and produced copies of their visas. To his surprise, they were waved on.

Finally, they reached the Baron Hotel near the airport, used mainly by British officials as a centre for processing Afghan people hoping to be evacuated.

They were prepared for crowds, but not the scene that greeted them. ‘There were people everywhere – thousands and thousands – who for all I knew were in the same position as ourselves,’ says Bakhtiar. ‘Our joy at getting past the Taliban didn’t last long. We began to think that a bigger hurdle lay ahead, that our passage to England would not be straightforward at all.’

Warning his family to stay together, Bakhtiar had an idea. Some days earlier he had spoken to a friend, a former British soldier called Angus, who had worked with CNN and who had promised to try to help him.

‘I called and he was in the Baron Hotel. Angus came down and we eventually found each other in the crowd after he told me to flash the light on my mobile phone.

‘By now it was around 9pm, but he told me to stay put and wait until around 1am when it was quieter. He said he would try to speak to friends in the military. Whatever he did, it worked.

‘In the middle of the night my name was called out over a Tannoy and we were told to come forward. The relief was indescribable.’

Many more hours of waiting and processing followed before they finally boarded a military plane to Dubai, another to Manchester, then to Heathrow. ‘All of us were tired and quiet on the plane,’ he says. ‘Just alone with our thoughts. There were two visions before me that were competing in my head.

‘I kept seeing and thinking about the people I left behind, our country, our whole way of life. At the same time, I was extremely happy and grateful to be heading to England, a dream come true.

‘What happens next is unclear. I hope to continue my studies – and my children will be educated in England – and then one day I hope to return to my country and contribute towards a better future.’