New Zealand authorities have launched dual investigations into the tragedy on White Island that has claimed the lives of at least five people and put 31 people in hospital.

The NZ police investigation will run in parallel with another launched by WorkSafe, the country's work safety regulator.

New Zealand Prime Minister Jacinda Ardern told parliament on Tuesday there were serious questions to answer about what happened on the island – and why tourists were there in the first place. 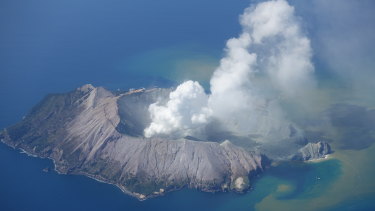 “We know there will be bigger questions in relation to this event. Those questions must be asked, and they must be answered,” she said.

“But our focus now is on discharging our duty of care to those effected, and that is also the duty of the police.”

Among those questions is likely to be an inquiry as to why so many tourists – more than 17,000 last year – were allowed onto the cone of New Zealand’s most-active volcano.

Tourism numbers on the island have dramatically increased since the early ‘90s thanks in part to a period of relative quiet on the island, as well as a global volcano-tourism boom.

But in recent years White Island has started to shake and smoke again.

There have been several near-miss incidents in recent years, as well as large eruptions in 2012, 2013 and 2016. Experts say it was pure chance none of those explosions killed anyone.

There will also be questions asked of the four tour operators licenced to take people to White Island.

Of those operators, only one – White Island Tours – was officially registered with WorkSafe to provide live volcano walks.

Monitoring had shown significant increases in volcanic activity on the island over the past few months, and the volcanic alert warning level had been raised from 1 to 2 three weeks ago.

New Zealand does not have an alert-level ‘cut-off’ for volcano tourism – it is up to tourism operators to decide, based on monitoring agency GeoNet’s warnings, when it is safe to visit White Island.

In 2014, the New Zealand Herald reported on the frustrations of GeoNet’s staff members, who claimed tour operators frequently ignored their warnings or pushed the risk envelope.

Hemi Morete, the lead auditor of the company which signed off White Island Tours' safety audit, said the company’s safety systems were robust.

"You can't eliminate risk, you can just manage it down – the same as someone climbing a mountain or diving. There is risk involved, that's, I guess, what makes it an adventure,” he said.

GeoNet also faces scrutiny. While the agency raised the warning level before Tuesday’s explosion, it also said at the time that current activity did not pose a direct hazard to visitors.

Professor Ray Cas, a leading Australian vulcanologist who visited White Island in 2008, described the volcano as a “disaster waiting to happen”.

White Island, also known as Whakaari, is a marine stratovolcano, a volcano slowly built up over time by continuous lava eruptions.

The volcano forms the entire island. About 70 per cent of the volcano is below sea level. The part tourists walk on is, essentially, the volcano’s cone.

The volcano is extremely active and unpredictable. That is driven by two factors.

First, White Island sits atop a tectonic plate boundary. The Pacific plate is being slowly pushed beneath the Australian plate.

As this happens, boiling hot magma is generated and pushed up toward the surface.

Most of White Island sits below sea level. This water is constantly penetrating inside the volcano, where it sometimes comes into contact with the rising magma.

“That’s what makes it so active,” says Professor Cas. “There is magma beneath and a constant supply of seawater that is being superheated to explosive temperatures.”

The only way to and from the island is via small inflatable dingies; 47 people were on the island when it erupted. “In a big volcanic incident, it would be impossible to get people off quickly,” says Professor Cas.