During the car ride to a surprise Aug. 8 performance in front of 30,000 at the 2022 Commonwealth Games in his hometown of Birmingham, England, Ozzy Osbourne paused for a moment of quiet reflection.

“The games were a quarter of a mile away from the school that I went to growing up, and as we drove past it, I thought, ‘If somebody would have told me I’d be doing this up the road so many years later, I would’ve never believed them,'” Ozzy tells PEOPLE while sitting in the library of his $18 million Los Angeles estate. “My life has been incredible with the things that have happened to me — both good and bad.”

The highs have been massive: sold-out world tours, $100 million in album sales and a 2006 Rock and Roll Hall of Fame induction as a member of Black Sabbath. And the lows? Well, they’ve been bruising.

Beyond drug and alcohol addiction, arrests and rough patches with Sharon, 69, his wife of 40 years, Ozzy, 73, has faced several major health hurdles in recent years. In 2019, he had surgery that “really messed me up” after a fall during a nighttime trip to the bathroom aggravated damage to his neck and back from an ATV accident 16 years before. Since then, he’s undergone two more procedures, the latest in July.

“I’ve never been this laid up,” says Ozzy, who was diagnosed with Parkinson’s disease after his fall and now uses a cane and struggles with his speech as a result of the condition. “I can’t understand my luck.” 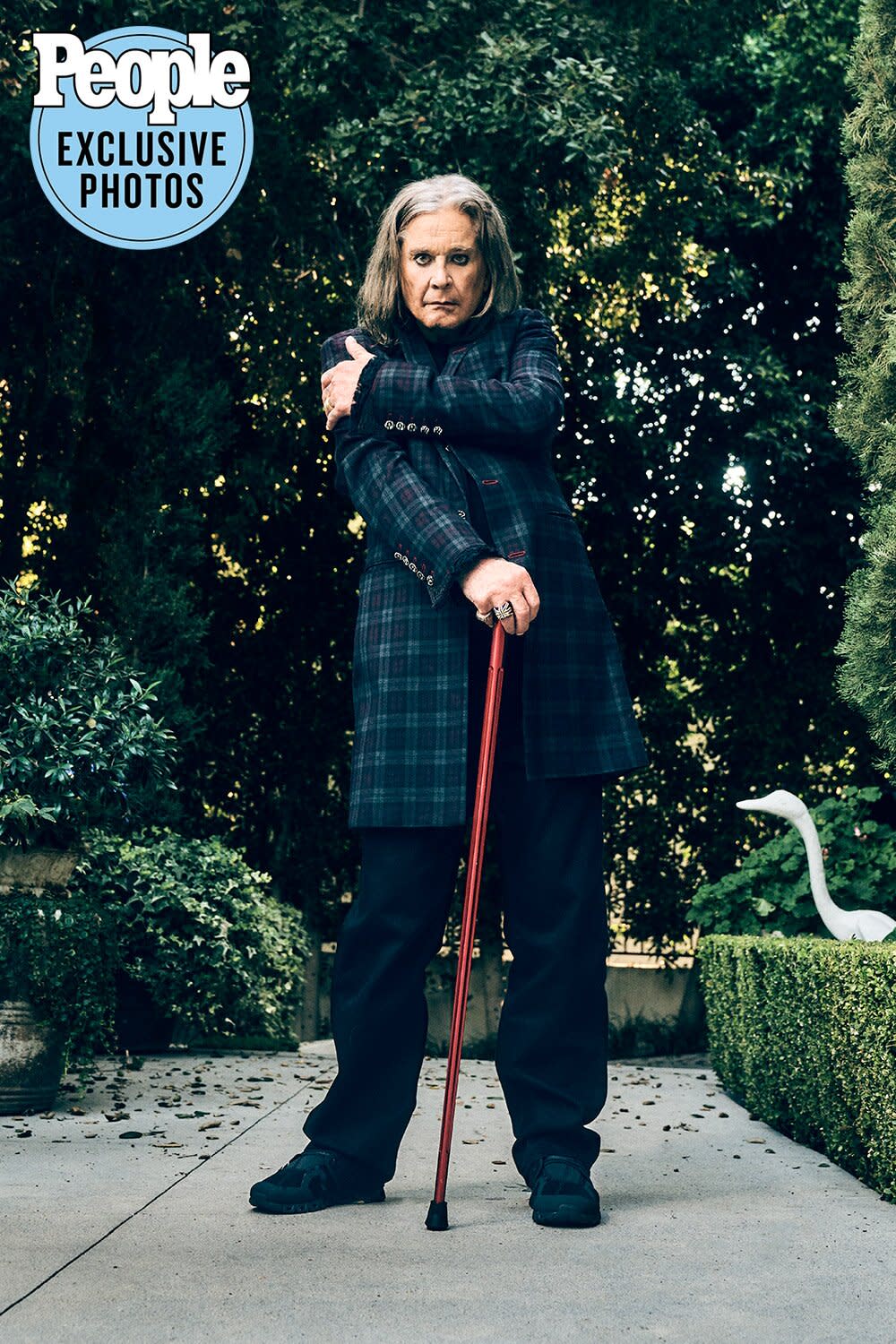 Ozzy needed a back brace to hold him up during his Commonwealth Games performance, but his return to the stage after three years away gave him renewed hope. His 13th solo studio album, Patient Number 9, is out now, and he’s focused on getting strong enough to get back out on the road.

“It’s where I belong,” says Ozzy. “The relationship I have with my audience is the biggest love affair of my life.”

RELATED: Ozzy Osbourne Details ‘Agony’ of Trying to Deal with Parkinson’s Disease and Other Health Issues

Raised in Birmingham by his mom Lilian, a factory worker, and dad John Thomas “Jack,” a toolmaker at the General Electric Company, Ozzy (born John Michael) got his first taste of the stage while performing in school plays.

After dropping out of school at 15, he performed as the lead singer in several local rock bands before forming Black Sabbath with Geezer Butler, Tony Iommi and Bill Ward. The band’s 1970 self-titled debut album — widely regarded as the first heavy metal record — put them on the map, but as the band’s popularity grew with classics like “Iron Man” and “War Pigs,” so did Ozzy’s dependence on drugs and alcohol.

“I started to take the persona off stage,” says Ozzy, who became known as the Prince of Darkness. “That’s when I got really messed up. I didn’t give a s— about anything. I would drink myself stupid.”

After the band fired Ozzy in 1979 over his substance abuse, he spent three months holed up in a hotel room getting drunk and high before Sharon — whom he’d met years earlier while her dad, Don Arden, was managing Black Sabbath — helped him get back on his feet. After becoming his new manager, Sharon encouraged Ozzy to pursue a solo career. His 1980 debut single “Crazy Train” took off, and it remains Ozzy’s most-played song, with nearly 400 million streams on Spotify to date.

Watch the full episode of People Features: Ozzy Osbourne below or on the PeopleTV app.

Despite his success, Ozzy continued to struggle with substance abuse, and he became known for his wild onstage antics. During a gig in Des Moines, Iowa, in 1982, he famously bit the head off of a real bat that a fan had thrown on stage for him.

“I know when I eventually do leave this place, it’s going to be, ‘Ah, the man who bit the head off the bat joined the bat today,'” he jokes.

Ozzy — who married Sharon in 1982 — got sober in 2013, but it wasn’t the end of his health woes. Since his 2019 surgery, during which two metal squares were screwed inside his neck, Ozzy says it’s “been a nightmare.” 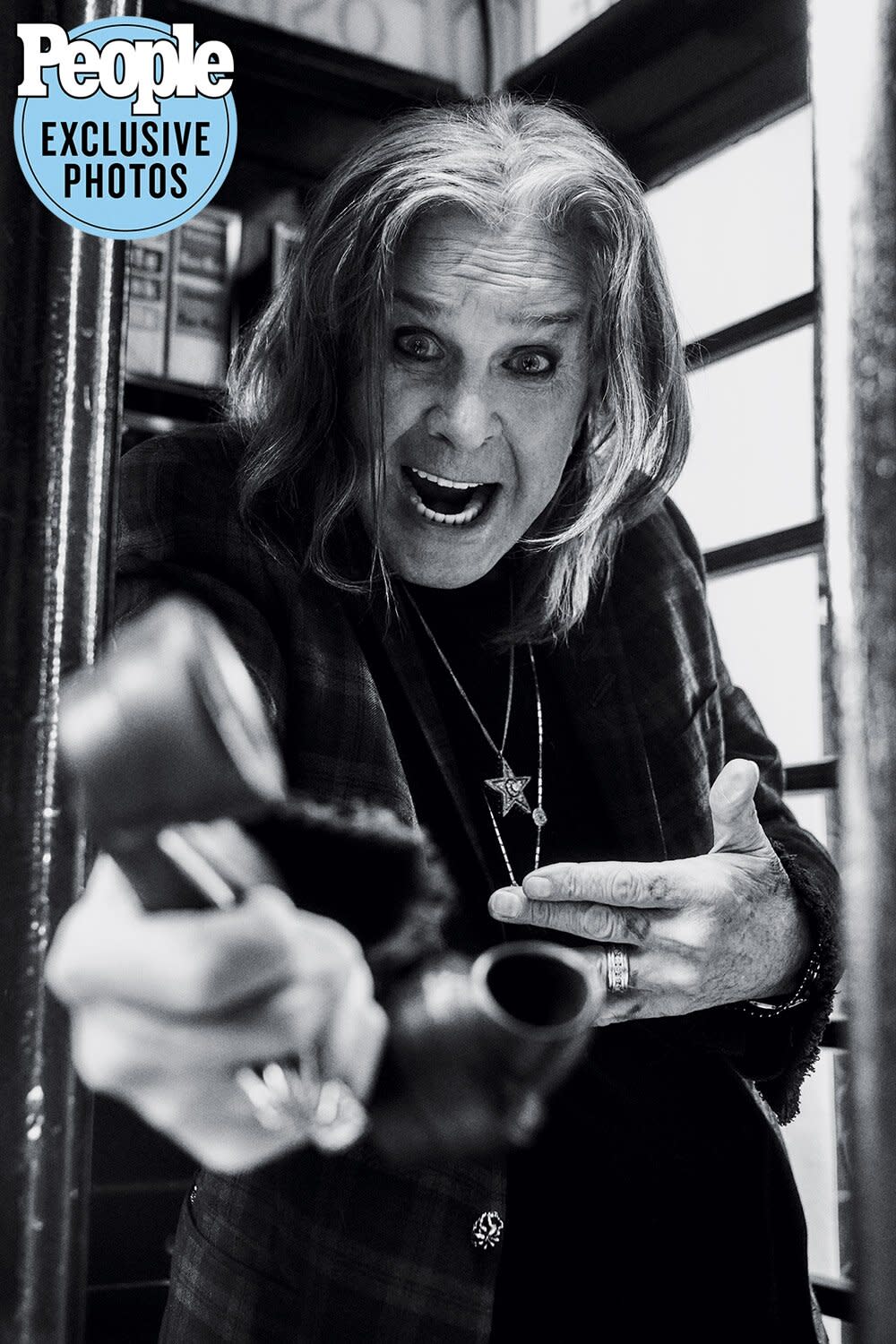 As the metal plates loosened over time, he required two more surgeries to clear the debris that had formed underneath.

“That’s the only thing that reminds me I’m getting older: things going wrong and not working anymore,” he says. “But I still feel young at heart.”

Now proud grandparents, Ozzy and Sharon — who share kids Aimee, 39, Kelly, 37, and Jack, 36 — count family as their greatest blessing. Jack has daughters Pearl, 10, Andy, 7, and Minnie, 4, with his ex-wife Lisa Stelly, and his fourth, Maple, with his fiancée Aree Gearhart, arrived two months ago. Kelly will also welcome her first child with partner Sid Wilson of Slipknot soon.

“It fascinates me that every time I see the girls, they’ve learnt something else,” Ozzy says. “They’re adorable.”

RELATED: Ozzy Osbourne Says He Has a ‘Crazy’ Household Filled with ‘Dogs’ and Grandkids

The Osbourne family — which also includes 11 dogs and two cats — remains as wild as it was 20 years ago when their MTV reality show The Osbournes cemented their place in pop-culture history. So is its never-say-“retire” patriarch.

“I am determined to get back on stage even if I have to be nailed to a board and wheeled on,” Ozzy says. “Survival is my legacy.”

For all the details on Ozzy Osbourne’s health struggles and life now, pick up the latest issue of PEOPLE, on newsstands everywhere Friday.