Having been a proud member of the Australian multicultural landscape ever since I set foot on this land 57 years ago, there is one thing that has always struck me. And that is my high regard for fellow Australians. By and large, I have found Australians to be very friendly, easy to get along with, and a welcoming lot.

One notices this every year when peoples of every colour, creed, ethnicities, nationalities and language groups gather all over Australia to receive their citizenship. It is an immensely proud moment for many who have endured subhuman conditions, segregation, racial prejudice and blatant discrimination in the part of the world they came from. 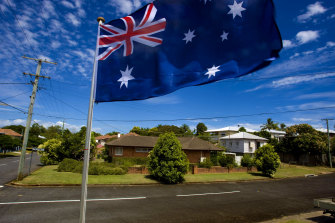 The Australian flag is a source of pride for many.Credit:Glenn Hunt

In this new land of promise, we are happy to join in the chorus of the national anthem, “Australians all let us rejoice…” – a most appropriate song for a young nation. It is also heartening to know that slowly but surely, the First Nations people are finally getting their voices heard.

We are proud to salute the Australian flag; many of us display it in our homes. It is worth asking as to why we value the flag so much? The simple answer is that every human being likes to belong to a group whose members share the same values. The national flag represents to us a symbol of what we strive to be: a united and cohesive land which will fulfil all of our dreams and expectations.

As a symbol, a flag represents immense pride. One often finds that the notion of pride transforms itself into the notion of superiority and occasionally hate. Naturally, in a multicultural society such as ours, one must avoid these notions at all costs.

I have watched with great concern the rise of extreme right-wing racism in this land of ours. These groups have also resorted to displaying the Hakenkreuz – the Nazi swastika. No one would disagree that such symbols must be stamped out and I am glad our politicians have taken strong and decisive action in banning this symbol.

One wonders whether simply banning this hate symbol would achieve much. I would have thought that education of such extreme groups and also our young would be the more effective answer. However, that is yet another topic.

The new laws prohibiting the use of the Nazi symbol makes an exemption for the cultural and historical significance of the swastika for the Buddhist, Hindu, Jain and other faith communities. As a person with a culturally rich Indian background that honours the swastika, I would like to allay certain misconceptions about the symbol. Far from being a hate symbol, the Indian swastika is steeped in auspiciousness, goodness and love. This wonderful symbol awakens my childhood memories.

I came from a small dainty town called Wai in Maharashtra, nestled among the Sanhyadri hills. The sacred river Krishna flows through the town and the picturesque ghats built by the Peshwas beautify the river banks and the surrounding landscape.

Every morning my grandmother would get up before sunrise and sprinkle water on the dirt road in front of the main door in a semicircular pattern. This ensured that the dust was settled. She would then draw a rangoli, a colourful pattern with powdered chalk. These beautiful patterns varied greatly and each household had their own speciality.

The rangoli served a dual purpose: firstly, it constituted the worship of mother earth. Secondly, it signified that the home was auspicious and visitors were welcome. Invariably, a part of these patterns was always a swastika. My grandmother then drew a pattern in front of the small household shrine as well. In the midst of this pattern was a swastika. 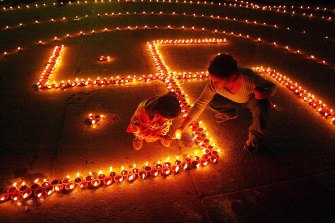 Children light lamps in the shape of the swastika on the eve of Hindu festival of Diwali.Credit:Reuters

Why is the swastika so important for Indians? It is because to Hindus, it denotes peace, prosperity and plenitude. Hindus have two such marks: Om and the swastika. The Sanskrit word swastika literally means “all is well”.

We all know the cross is a important symbol for the Christians. Interestingly, the swastika is actually a modified cross, an equal-armed cross with bent arms. Hindus believe the swastika is directly linked to the sun. We distinguish between two kinds of swastikas: the right-handed one which represents the sun during spring, and the left-handed one which represents the autumnal sun. The latter is not considered auspicious.

The right-handed swastika is be found all over in India. As a symbol of good luck, it is stamped on many objects. During Hindu weddings, it is imprinted on both sided of the auspicious cloth that separates the bride and the groom before they exchange garlands. It occupies an important part of temple architecture as well.

Although it has been associated with the Hindu religion, the swastika has been found in excavations in many parts of the world and has often been called the very first religious symbol of early humans.

In conclusion, let me stress that the Nazi hakenkreuz and swastika are literally poles apart. The former represents misplaced superiority and hate, the latter love and peace.