This is the shocking moment a rookie PC helped to disarm a knifeman as he was Tasered three times after he robbed a chemist and took the family GP hostage.

PC Snowden, who is in her 20s, was just five weeks into her new job when she and her mentor were assigned to tackle Michael Brannigan who was going berserk at a GP’s surgery whilst armed with three kitchen knives and a meat cleaver.

During his noon meltdown Brannigan, 51, who was complaining of a lack of mental health support was seen to clench his teeth before lunging at PC Snowden and her PC Simon Toft whilst carrying a chair base and a metal pole. 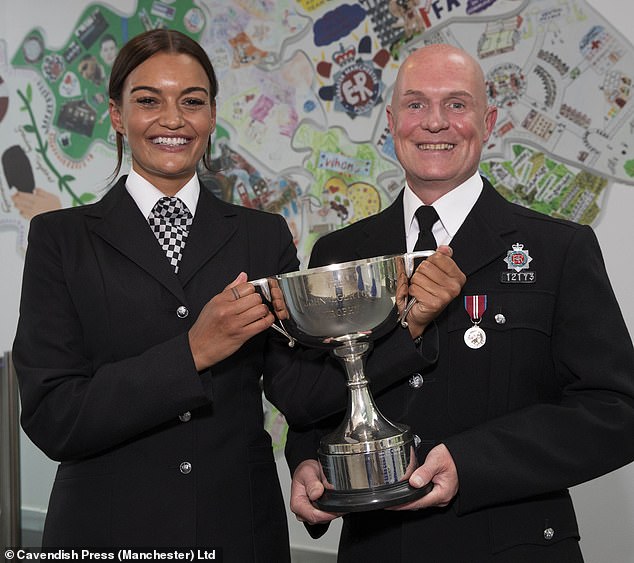 PC Snowden (left), who is in her 20s, was just five weeks into her new job when she and her mentor PC Simon Toft (right) were assigned to tackle Michael Brannigan who was going berserk at a GP’s surgery

He was eventually overpowered by the officers after PC Toft was forced to taser him three times in 19 seconds to subdue him.

Brannigan, of Woodley Stockport, Greater Manchester, later said he had carried out the attack at Woodley health centre in a bid to kill himself in front of his GP Dr Graham Parker.

The two PCs have since been recognised by police chiefs with the John Egerton Trophy a bravery award which is named after a 20 year old constable killed on duty in 1982.

At Minshull Street Crown Court, Manchester, Brannigan admitted four charges of possession of an offensive weapon, robbery, criminal damage, assault by beating and affray and was jailed for three years and five months.

The incident on March 12 this year began after Brannigan had been into the surgery to demand copies of his medical records.

He became aggressive and left after being told to calm down by staff but he returned later with knives and the cleaver stuffed in his rucksack. 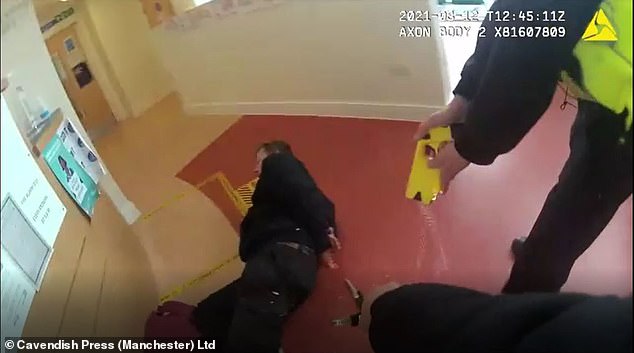 Outside the surgery Brannigan used a walking stick to beat an elderly man who was out doing a food shop with wife before threatening the couple with a knife as they sat cowering inside their car.

He then robbed a nearby pharmacy of prescription drugs at knifepoint before storming over to the surgery itself to berate staff inside.

Miss Verity Quaite prosecuting said: ‘He entered the waiting room and loudly demanded to see the “main man”. He had a knife in his right hand and his walking stick in his left hand and was described as being menacing towards the receptionist.

‘She fled to the back office, where she and colleagues held the door closed as the defendant attempted to open it. Dr Parker ran down the corridor and took over holding the door closed while the receptionists locked themselves in consultation rooms for safety.

‘Dr Parker attempted to calm the defendant down, as he was shouting in a ‘chaotic’ and ‘disorganised’ manner but the defendant shouted that he was ‘coming to get what he wanted’, that he wanted a cup of tea, and complained that the doctor had failed to fix an issue with his shoulder.

‘When Dr Parker told the defendant he was unable to hear him, the defendant used an office chair to smash the window that separated the office from the corridor. He told Dr Parker that the others could leave, because it was Dr Parker who was the hostage. 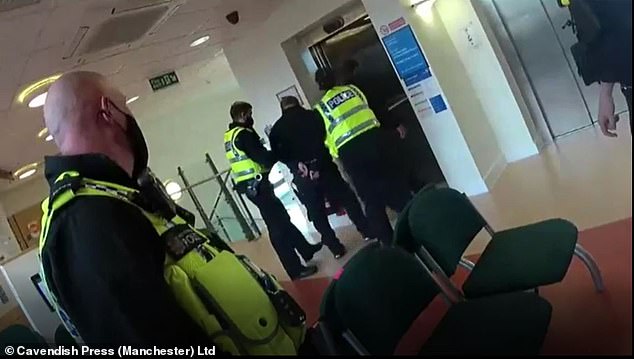 ‘The doctor was afraid the defendant was going to climb through the window, but instead the defendant went to the waiting room where he spoke to the manager from another practice. Dr Parker called over to her to keep herself safe, at which point the defendant told Dr Parker that if he saw him again, he would be coming for him.

‘The practice manager tried to lock the waiting room door but before she was able to do so, the defendant appeared and put his arm through the door. He was holding a meat cleaver and attempted to hit her with it until she managed to close the door.

‘She then observed the defendant pick up a sign and ram one of the other doors with it.’

The two PCs arrived at around 12:45am whereupon Brannigan walked up to them carrying the base of a chair. He was told to drop it but responded by telling them to f..k off.

PC Toft was then said to have ‘red dotted’ Brannigan with the taser and as the knifeman lunged at them, he opened fire.

Initially Brannigan pulled the taser darts from his body and despite being hit with a second blast continued to try to pull the probes from him before reaching again for the chair base and his rucksack. he was finally overpowered after the taser had to be re-energised again.

As he fell to the floor, PC Snowden observed two knives fall from his back pocket, The two officers subsequently searched the rucksack and found the meat cleaver and a further knife. A box of amitriptyline was recovered and Brannigan’s walking stick was found in his car. 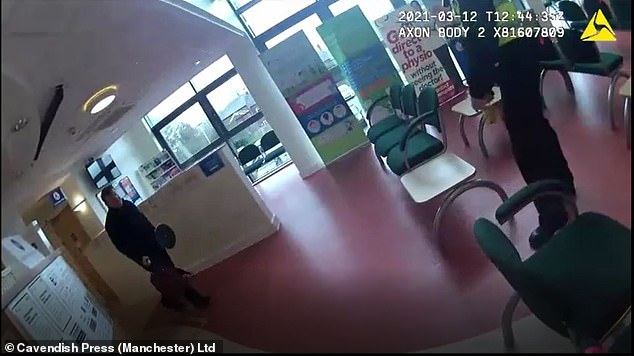 In interview he said he robbed the pharmacy to get medication and then stormed the surgery so he could take a fatal overdose in front of Dr Parker.

His counsel Miss Kay Driver said: ‘His intention was to commit suicide in front of his GP. He did not intend to cause any physical harm to anyone else. He is extremely remorseful for his behaviour and acknowledges they would have been greatly frightened.

‘He knows his behaviour would have scared those he came into contact with him at the time. He has a history of depression and anxiety and suffers with agoraphobia. He had a lack of support for him when these offences were committed and had made several attempts to call the mental health team but he was given no help. He did not sleep for three days prior to these offences and was feeling utterly anxious.

‘He said he was in something of a dream like state as if the floor was going to swallow him up. Officer Toft said he genuinely believed that he needs help and he would like to see him get the available that’s available to him.’

Sentencing Brannigan Judge John Potter told him: ‘Quite bluntly, you then caused mayhem and harm and this was an extremely frightening series of events. You caused terror and harm to members of the public and your behaviour towards health professionals trying to care for others was planned and utterly deplorable. All of this took place at a time during a health pandemic. 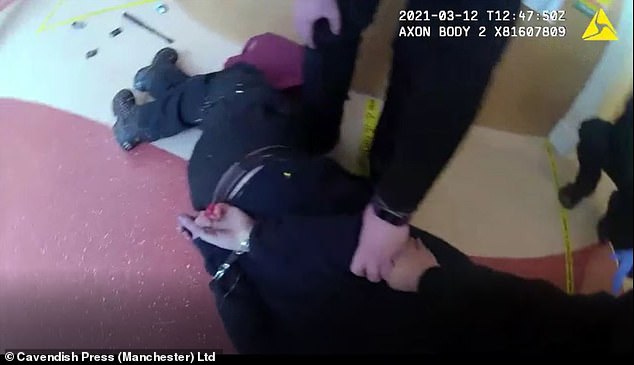 ‘This was planned knife crime towards members of the public, health workers and police. Some people acted with great bravery which could have had grave consequences. There is no excuse for your behaviour.’

Earlier this month PC Snowden recalled the incident and said: ‘I’d just finished the first five weeks of my tutor phase with PC Toft. Due to the situation changing so rapidly, there was no time for Simon to fully brief me so my job was to be aware of my surroundings and do what I’d been trained to do whilst keeping myself, my colleague and the public safe.

‘The extensive and thorough training we go through as officers gives you every eventuality however until you are faced with a scenario such as this one, you never know how the incident is going to play out.

‘I am thankful for the training that I had been given together with the way myself and PC Toft worked together to prevent anyone coming to harm.’

Chief Constable Stephen Watson said ‘This incident, whilst shocking, shows the danger that our officers run towards on a daily basis. They put themselves in situations that others would run from, to protect our communities and thanks to their quick actions, this incident ended without harm or injury. I am proud to have two such officers as a part of our force.’