A St Kilda man set to sue Victoria Police over his mistaken arrest at gunpoint will attempt to use a recent law change to access body-worn camera footage of the incident in the state’s first application of its kind.

Albert Garcia, 36, who works in the film industry, had recently been released from hospital and was walking home after dinner with friends when he was arrested, held to the ground and handcuffed. 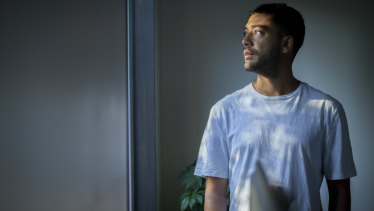 Albert Garcia, 36, was arrested at gunpoint outside his home in a case of mistaken identity.Credit:Meredith O’Shea

It had been Mr Garcia’s first night seeing friends again following his release from hospital days earlier. He’d spent two months there, including time in intensive care, after suffering complications from a flu jab and was still receiving daily home visits from nurses.

Police officers had been searching for an armed man after a 19-year-old was slashed across the face outside the Village Belle Hotel minutes before the arrest, about 12.30am on March 27, 2021. 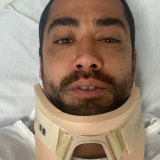 Mr Garcia was fitted with a neck brace after he was readmitted to hospital following his mistaken arrest.

The 36-year-old said he experienced neurological problems as he was held to the ground and wet himself while pleading with officers to let him up as they had the wrong person.

“I was telling them, guys don’t leave me here on the ground, it’s full of bacteria and I’m immunocompromised,” he said.

“I couldn’t stop crying, my legs went paralysed and I could not breathe.

The chief lighting technician said he had since suffered complications in his recovery, having to be readmitted to hospital.

Mr Garcia will sue for damages, claiming the arrest was unlawful and excessive, and in doing so make what is understood to be the first application for access to police body-worn camera footage for a civil case.

Until recently, Victorians had been unable to access a police officer’s body-worn camera footage for civil lawsuits due to legislation restricting its use to criminal cases. 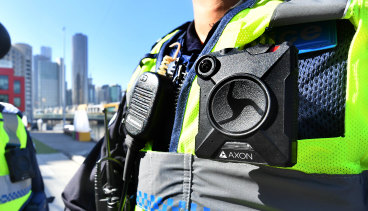 A body-worn camera on a police officer.Credit:Joe Armao

In late December the state’s Attorney General Jaclyn Symes amended the law to allow body-worn camera footage to be accessed as part of lawsuits against police and prison guards.

The cameras, which are attached to an officer’s ballistics vest and manually turned on, were first trialled in Victoria in 2017 following recommendations from the Royal Commission into Family Violence.

More than 8000 frontline police, protective services officers and some prison guards and paramedics now use the technology.

Principal lawyer at Robinson Gill Jeremy King, who is representing Mr Garcia, welcomed the legal change and said footage of an incident was critical in providing an objective view of what happened for court proceedings.

“This is the first time that we’re going to issue a writ and seek body-worn camera footage from Victoria Police. It will be very interesting to see whether the legislation will work in the way intended by the government,” Mr King said.

“In Albert’s case, I suspect there may be a divergence of views as to what happened. Ultimately, the body-worn camera footage will shine a light on what actually occurred.”

Previously, under the Surveillance Devices Act 1999 and Regulations, footage could only be used for specific purposes including criminal investigations, prosecutions and investigations of complaints against officers.

The change means footage can now be assessed in civil proceedings where officers will be called as witnesses, Victorian Civil and Administrative Tribunal cases and matters in the state’s Victims of Crime Assistance Tribunal.

In the days after the stabbing, police released images of two men wanted for questioning over the attack.

They said both were Caucasian, believed to be aged in their early 20s, with one wearing a black cap and blue shirt, the second a white cap and black shirt.

Mr Garcia is 36, of Spanish heritage, and was wearing a light-coloured shirt when he was arrested.

Police said two males had since been charged over the attack.

A police spokesman said officers had been responding to a serious assault in the St Kilda area. They confirmed police arrested a man nearby, and he was released when it was found he was not involved.