Reagan’s would-be assassin John Hinckley Jr. admits for the first time that he is responsible for the death of press secretary James Brady

The man who tried to assassinate Ronald Reagan has admitted for the first time he is responsible for the death of the former president’s press secretary.

John Hinckley Jr. opened fire outside the Hilton Hotel in Washington DC on March 30, 1981 — striking Reagan within an inch of his heart and nearly killing him.

He also struck White House Press Secretary James Brady in the head, leaving him paralyzed and confined to a wheelchair for the rest of his life.

But Brady survived and went on to become an advocate for gun control, with former President Bill Clinton even naming a bill after him.

He ultimately passed away on August 4, 2014, aged 73, with a medical examiner concluding he died from the effects of the head wound he endured 33 years earlier.

The medical examiner ruled Brady’s death at the time as a homicide. Now, Hinckley Jr has finally taken responsibility for his death in a bombshell interview. 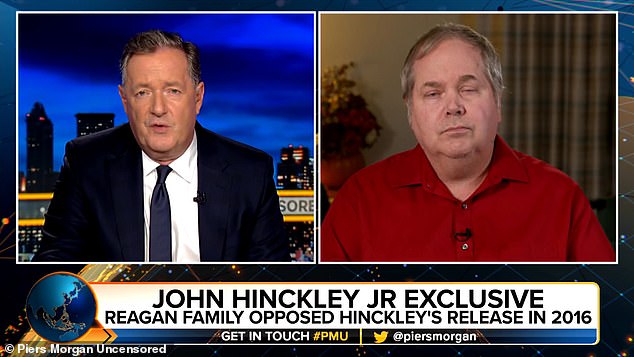 Speaking to Piers Morgan, the 67-year-old ex-convict said he does ‘accept’ that he killed Brady 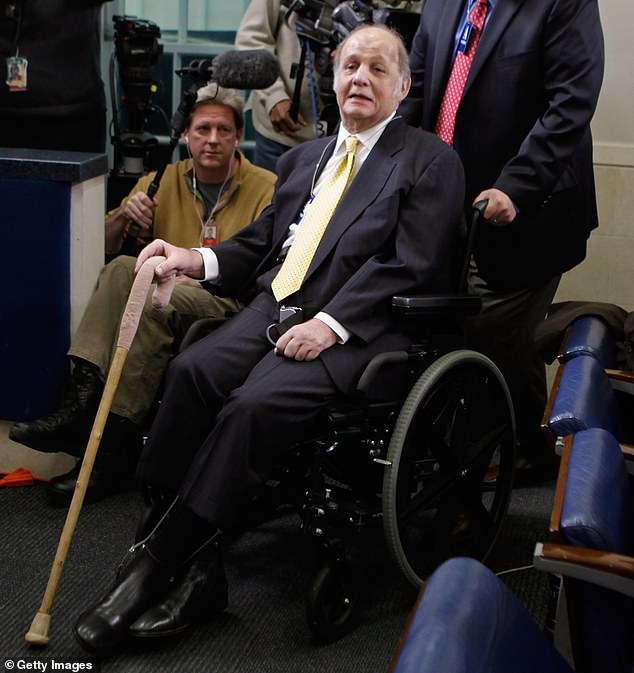 Brady died on August 4, 2014, with a medical examiner concluding that he died from the effects of the head wound he endured 33 years earlier

Piers Morgan repeatedly pressed the 67-year-old ex-convict in an exclusive interview on the issue of Brady’s death.

‘He died from the wounds he suffered, it was designated homicide by the coroner because of the year and the day rule you could not be tried for murder,’ Morgan said.

‘But do you accept now that because you fired the gun at James Brady that caused the catastrophic injuries and subsequent death that you were guilty of his murder?’

At first Hinckley tried to be coy, responding: ‘I wouldn’t say that, but I certainly caused him to have devastating injuries.

‘But I believe he lived on for another 30-something years. So I can’t really say I’m the cause of his murder.’

Still, Morgan insisted, ‘You did kill him,’ to which Hinckley Jr. said: ‘I understand. ‘But [do] you accept you killed him?’ Morgan asked. ‘I would say yes,’ the would-be assassin finally replied. 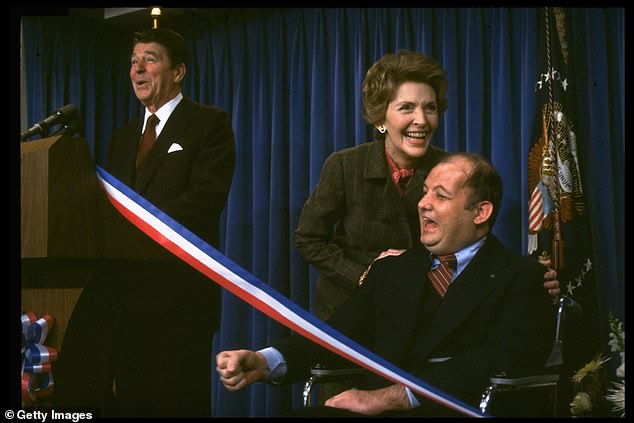 Brady managed to survive, but was left paralyzed and confined to a wheelchair. He is pictured here with Reagan and First Lady Nancy at the reopening of the White House Press Room following the shooting

The exchange came in Hinckley Jr.’s first international television interview since he was released from prison in June.

He insisted that he is a changed man, who could not even remember the details of what he did back on that fateful day in 1981.

‘I just remember I was at a hotel in Washington DC and I happened to have the newspaper before me and I saw the President’s schedule for that day, and that’s how I knew where he would be that day,’ Hinckley Jr. shared.

‘And I think I went and got  some breakfast, and I went up to the hotel.

‘In those days it was pretty easy to get close to the President and of course that’s all changed now… and unfortunately I was able to go through with the crime.’

It was said he was motivated at the time by his obsession for actress Jodie Foster and her film, Taxi Driver.

‘I had first seen her, I believe in the movie Taxi Driver in 1976, I believe,’ Hinckley Jr told Morgan on Monday, adding that he became obsessed with her to the point where he attended Yale University to ‘follow her and try to find her.

‘That turned out badly, so my thinking went very negative, and that’s why I went ahead with the shooting.’

He was ultimately found not guilty for the shooting by reason of insanity at his 1982 trial, and was released from his psychiatric medical facility to live with his mother under strict restrictions.

Hinckley Jr was finally released from all court restrictions this past June. 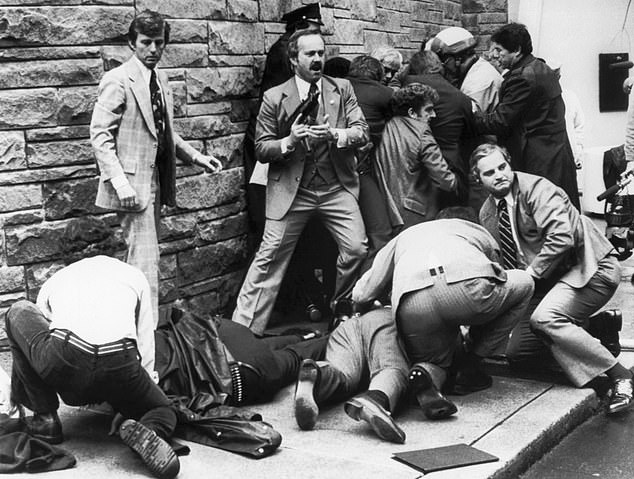 Hinckley fired on the president and his entourage outside the Hilton Hotel in Washington DC on March 30, 1981. Secret Service agents, police officer and bystanders are pictured taking action immediately after the shots were fired 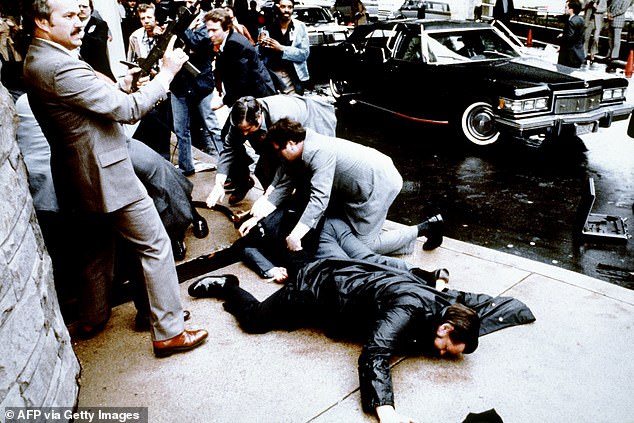 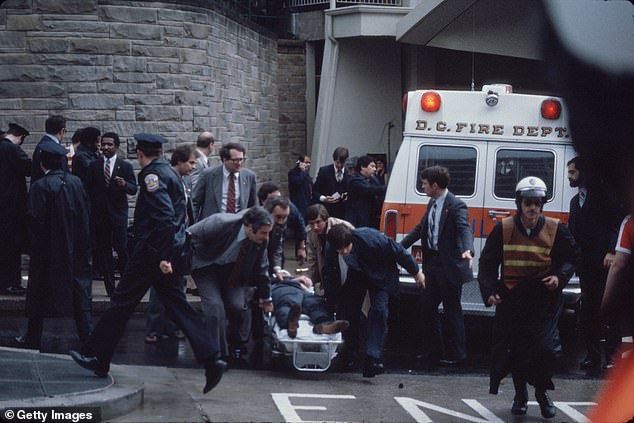 He now says he feels ‘so terrible about what I did.

‘I was right in the middle of a really severe mental illness, I had really bad depression and I had delusions going on. Looking back on it now, it’s like a whole another lifetime. I just can’t imagine doing what I did.’

Morgan then asked him, ‘You did want to kill President Reagan, right,’ to which Hinckley Jr said: ‘I suppose so, back then I did. I’m just so glad I didn’t, that I did not succeed.’

He then acknowledged that if he had succeeded, he would still likely be behind bars and said he understood why some people are upset he was released.

‘I understand that, because it was such a serious, heinous crime,’ Hinckley said.

‘But it was 41 years ago and a lot has happened to me in those 41 years. And I am hoping to show the public that I am a good person now and I am trying to do some good things with my music and my art.’

He said he has not been in touch with the victims’ of the shooting or their families, and went on to explain that he is now on two medications, including an antidepressant which he thinks ‘are effective.’

And when pressed by the TalkTV host about the difference between him and Mark Chapman, the man who killed John Lennon and remains behind bars, Hinckley said he sees ‘a big distinction because Mark Chapman was found guilty.

‘He has been in prison all of these years. I was never in prison, Piers. Iwas in hospital for 35 years, receiving treatment and I was found not guilty by reason of insanity and I received treatment all these years.

‘My family stood behind me and I had a great lawyer… I feel like my release was very justified.’

Hinckley later added: ‘I would say that I have a really good track record.

‘I wasn’t just released one day from the hospital. I got released over a number of years. My judge gave me freedom in incremental steps to see how I would do and I’ve always done well with the freedoms he gave me.

‘I’ve proved myself to be a very peaceful person now. And that’s how I kind of live my life.’

He concluded: ‘I have shown for the freedoms I have gotten through the past 10 or 15 years, that I do have a good track record of being a good, law abiding citizen.’ 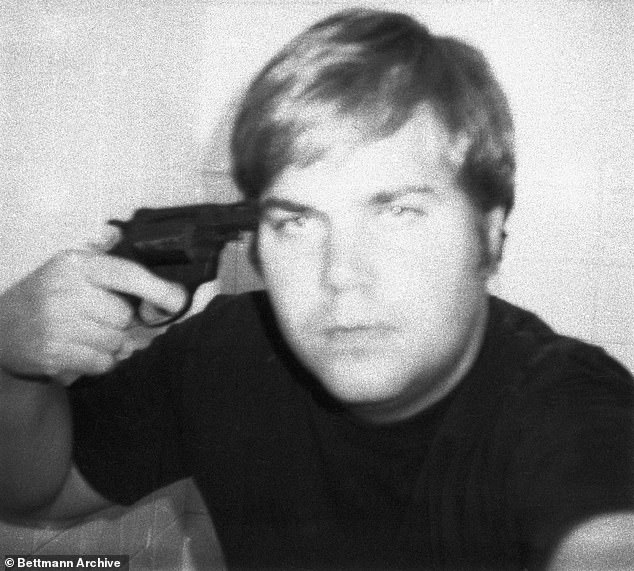 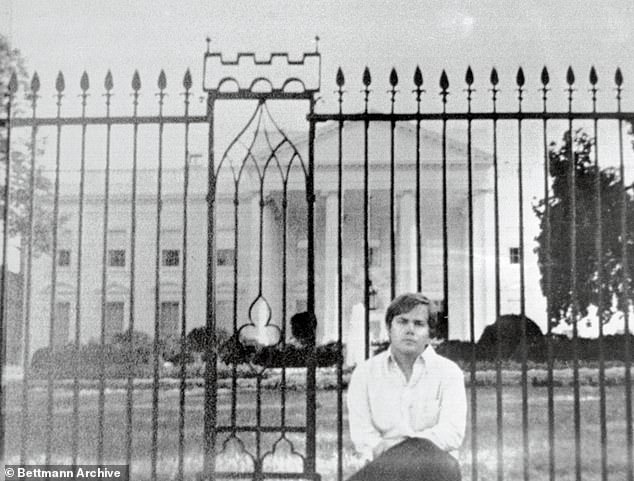 He was found not guilty of the shooting by reason of insanity, and now insists he is a changed man after he was freed in June

Hinckley is now trying to move on with his life and pursue a music career, but he said that has been tough because his concerts receive negative backlash and the venues would back out of the deal.

But, he said, he decided to do some interviews to prove to the public ‘I am not thee person I was all those years ago.

‘There has been an image of me for many years, a really negative image, and I’m trying to change that… to show that I am a totally changed person.’

He added that he would like forgiveness ‘from the public at large’ and from the victims’ families.

‘I wouldn’t blame them if they don’t forgive me,’ Hinckley said. ‘But I wish they would.’