Netball Australia will not be turning its back on a multimillion-dollar sponsorship deal from mining giant Hancock Prospecting despite opposition from Indigenous squad member Donnell Wallam.

The cash-strapped organisation on Tuesday issued a statement reinforcing its support for the partnership, saying the four-year deal with billionaire Gina Rinehart’s company, worth $15 million, underpins the Diamonds program. 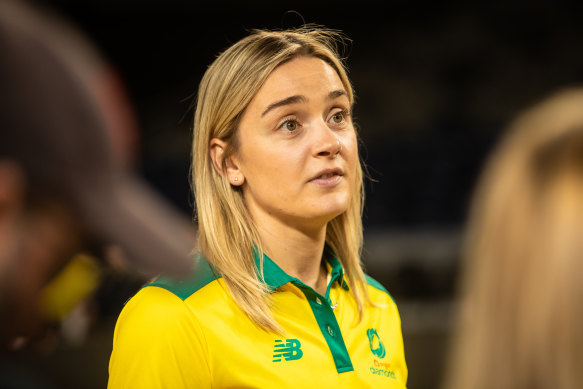 But Netball Australia said on Tuesday it had been decided it was not in the “best interests” of the players to wear the branded uniform as it could prove a distraction, and this was supported by the sponsor.

Diamonds skipper Liz Watson said the playing group also supported the sponsorship deal, which was a lifeline after Netball Australia suffered losses of more than $7 million over two COVID-impacted years.

Hancock representatives addressed the Australian team on Tuesday morning and Watson said all parties “wanted to make it work”.

“As players we do know that Hancock is such a great investment for our program,” Watson said on Tuesday ahead of the team’s third Test in the Constellation Cup series against New Zealand in Melbourne. 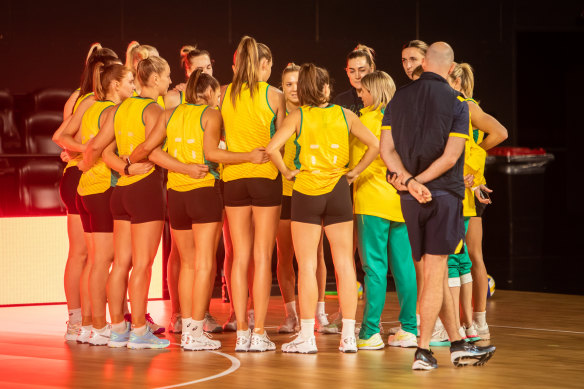 The Diamonds trained in Melbourne on Tuesday.Credit:Scott McNaughton

“We are supportive of Hancock and all the players here are as well.”

Wallam is not part of the Constellation Cup playing group and will join the squad for the series against England, which starts later this month.

When she makes her debut, the West Australian goal shooter, who plays for the Queensland Firebirds, will become the first Indigenous Test player in more than 20 years.

When the sponsorship was announced, Wallam raised concerns over Hancock Prospecting’s record on Indigenous matters, which date back 40 years to extreme right-wing comments made by Rinehart’s late father Lang Hancock.

Watson said the players wanted to stand by Wallam, who is reluctant to wear the sponsor’s logo.

“She’s part of this program, she knows where we stand, and we’re supporting Donnell with everything that’s going on. I’m confident that we will get a solution on this,” Watson said.

“We’re supporting her cultural sensitivities around the program, around the partnership, and we want her to be herself and feel comfortable and strong. I know that the girls are supportive of that.”

Incoming Netball Australia chair Wendy Archer, who replaced Marina Go on Monday, said it was a priority to address and resolve player concerns about the partnership as soon as possible.

“Netball Australia has continually attempted to understand, support and work on a long-term solution to this matter which at this time remains unresolved,” Archer said in a statement.

Playing their first home Tests in front of fans since 2019, the Diamonds need two strong wins in sold-out matches Melbourne on Wednesday night and the Gold Coast on Sunday to claim back the trophy.

Watson said she did not believe the sponsorship saga had contributed to the team’s opening losses to the Silver Ferns in New Zealand.

“I don’t think so – we haven’t performed how we wanted to and New Zealand have been great,” she said.

“It’s on us how we’re playing. It’s not got to do with outside noise and New Zealand are playing really well at the moment.”

The Australian team, which won Commonwealth Games gold this year, will compete in the World Cup in South Africa in 2023.