Boris Johnson may be a buffoon in the eyes of many of his fellow countrymen but in the next day or so he is likely to become prime minister of Britain, resident of 10 Downing Street and a man committed to taking Britain out of Europe. 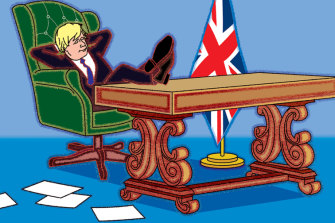 Putting this into context, Johnson will occupy the same premises and assume the same office as some of the outstanding Whig, Tory, Liberal and Labour figures of the 19th and 20th centuries in peace and in war.

How a man who was sacked from The Times and whose shambolic personal life goes beyond tabloid fodder is about to hold the same office as Palmerston, Gladstone, Disraeli, Asquith, Churchill, Wilson or Thatcher is little short of astonishing. 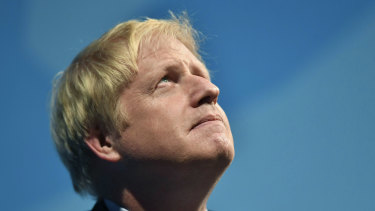 Boris Johnson, widely seen as the British prime minister in waiting, has said he will push for a Brexit, deal or no deal, by October 31. Credit:PA

Of course, these are not normal times in a world that has been turned upside down by the rise of populist politics across Europe and in America.

This leaves aside immediate concerns about how a Johnson-led government, in tandem with the United States, would deal with a crisis in the Gulf over a seized British tanker.

Johnson is being described in his own country as the “mini-Trump”. Indeed, Donald Trump endorsed his candidacy, telling reporters he would make an excellent choice.

Viewed from Australia, there are two ways of processing these latest developments. One is to say, "this too shall pass". Once the true costs of a “hard Brexit’’, including risks of a deepening recession, become apparent, Britain will return to its senses and pull back from the brink.

The other is to conclude that the world has indeed changed – some would say become unhinged – and Britain, in an act of extraordinary self-harm, will plough on with its Brexit from the European Union.

Remainers or anti-Brexiteers in the House of Commons and the Lords are fighting to prevent a hard Brexit on October 31.

Johnson’s arrival in Downing Street would not mean Brexit is a done deal. Much can happen before the end of October, including the calling of early elections and a second referendum.

A definition of a “hard Brexit” and its consequences may be useful here. What is proposed is Britain exit the European Union without a “divorce’’ agreement.

Overnight, Britain would leave the single European market and customs union without a safety net in the form of transitional arrangements. It would give up its privileged access to the world’s biggest market among the 27 members of the EU.

One is tempted to repeat Winston Churchill’s shouted words to Charles de Gaulle before the D-Day landings in which he said, “If Britain must choose between Europe and the open sea, she must always choose the open sea!’’

Brexiteers have drawn inspiration from Churchill’s example and his writings. This includes his triumphalist A History of the English-Speaking Peoples.

What is certain is that as prime minister, even if only briefly, Johnson, a Churchill biographer, would animate subscribers in Australia to an Anglosphere on which the sun never sets.

Former prime minister Tony Abbott is an Anglophile. High commissioner in London George Brandis, like Abbott an Oxford-educated Anglophile, has written encouragingly about opportunities for Britain in a post-Brexit world.

Johnson wrote a foreword to the report praising its “creative thinking about improving our already strong relations with the Anglosphere".

Among more controversial proposals is for the four navies of Britain, Canada, Australia and New Zealand to join forces in an "interoperable" Indo-Pacific fleet under a mutual defence pact with NATO-like obligations.

One problem with this proposal is that Britannia no longer rules the waves.

All that said, Australia would be remiss if it did not seek to take advantage of opportunities that would arise from a dowager Britain in danger of being left on the shelf after detaching itself from a European embrace.

After all, Britain is the world’s fifth-largest economy. It is the second largest foreign investor in Australia behind the United States.

Given the British market ranks 13th among merchandise trade destinations for Australian exports, there would seem to be plenty of scope for improvement.

However, before negotiations on trade and other matters could begin, Britain needs to overcome a big hurdle, leaving aside a sliver of the voting public among little-Englander members of the Conservative Party who have indicated they will choose Johnson over his challenger, Jeremy Hunt.

This is whether the body politic more generally and the voting public itself accepts or rejects Boris Johnson. Resistance, some of it intense, spans all sides of politics.

"The Tories, in their terror, have elevated a cavorting charlatan to the steps of Downing Street … If the price of Johnson proves to be [Jeremy] Corbyn, blame will rest with the Conservative Party, which is about to foist a tasteless joke upon the British people – who will not find it funny for long."

From an Australian perspective, yielding to an Anglosphere led by a preening Donald Trump and a cavorting Boris Johnson would not seem to be a wonderful idea.