Washington: Supreme Court Justice Ruth Bader Ginsburg, a champion of gender equality, has made history again as the first woman and first Jewish person to lie in state in the US Capitol, in a ceremony featuring tears, soaring music and even push-ups.

Ginsburg, a stalwart liberal on the high court since 1993, died last Friday at the age of 87. Known simply as RBG, the first Jewish woman on the court became an icon to millions of Americans – especially young girls – after a long legal career fighting for equal rights. 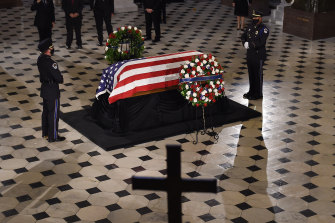 The casket of late Supreme Court Justice Ruth Bader Ginsburg lies in state at the US Capitol. Credit:Bloomberg

"She changed the course of American law. And even when her views did not prevail, she still fought," Rabbi Lauren Holtzblatt said during a ceremony attended by Democratic presidential candidate Joe Biden and his wife, lawmakers from both parties and relatives and friends of Ginsburg.

Denyce Graves, a mezzo-soprano, sang two songs, as some lawmakers brushed away tears.

Through her 80s, Ginsburg was known for her gym workouts. Her trainer, Bryant Johnson, did three push-ups in front of her casket as he paid his respects.

Female members of Congress, Democrats as well as Republicans, gathered on the Capitol steps to honour Ginsburg after the formal memorial ceremony in National Statuary Hall, where Ginsburg's coffin lay on a catafalque first built for President Abraham Lincoln.

Pelosi formally opened the ceremony at a lectern beside a large photo of Ginsburg in her judicial robes and one of her signature lace collars.

Civil rights pioneer Rosa Parks was also mourned at the Capitol in 2005, but as a private citizen she lay "in honour." 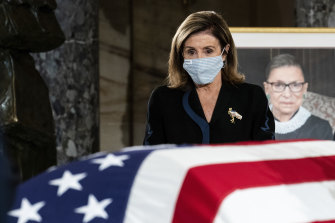 'Broke so many barriers'

President Donald Trump's Republicans – who narrowly control the Senate – have pledged to confirm his as-yet-unidentified conservative nominee to replace Ginsburg within the next few weeks, angering Democrats who feel he should wait until after the November 3 presidential election.

Biden, who presided over Ginsburg's confirmation hearings as a senator in 1993, has called for Republicans to honour her last wish and not consider a nominee until after the election.

Due to the coronavirus pandemic, Ginsburg's admirers had to pay respects outdoors at her coffin for two days of public viewing under the Supreme Court's soaring portico.

Trump, who is seeking re-election on November 3, was met with jeers of “Vote Him Out” by the crowd of mourners as he paid respects on Thursday.

The ceremony at the Capitol was limited to about 100 invited guests who wore masks and sat in chairs spaced far apart – because of concerns about the virus.