What if you could get an accurate weather report as much as three weeks in advance? In some parts of the world, that could soon be possible.

Right now, forecasters can reliably predict the weather in most parts of the United States up to eight days in advance, according to the American Meteorological Society. In recent years, research has shown that improving technology could make weather forecasts accurate 15 days ahead of time. And recent research published by Falko Judt, an atmospheric scientist at the National Center for Atmospheric Research in Boulder, Colo., found that there’s even more unlocked potential in the tropics.

Dr. Judt ran a series of simulations using a global weather model. As expected, the model’s ability to make accurate weather predictions dissipated after about two weeks for the polar and middle-latitude regions, which encompass most of the United States. But for the tropics, the model showed almost no dissipation, even after 20 days. This suggests that forecasters will one day be able to accurately predict tropical weather as much as three weeks ahead of time — and potentially even further in advance.

In general, tropical weather phenomena are subtler and less variable, so they “have intrinsically longer predictability,” Dr. Judt said. For example, New York might have warm weather the day before a blizzard, but the Amazon rainforest is never quite so capricious.

In the Amazon, “you could have a day that rains a lot and then two weeks later a dry spell of 10 days, but the temperature variation will just be a couple of degrees.”

But even if there is a lot of uniformity in tropical weather, that is not the same as predictability.

Weather prediction is challenging in the tropics in part because existing forecasting models aren’t well-suited to their most common weather phenomena. 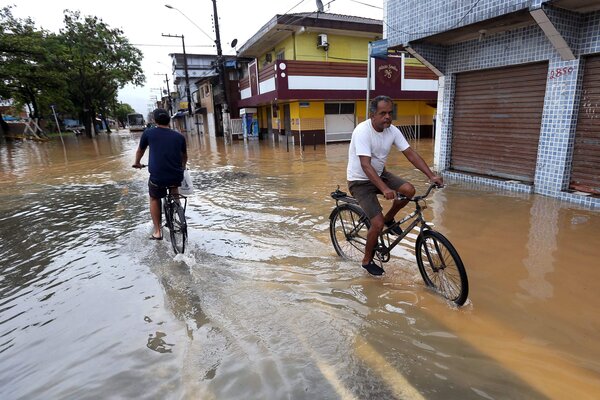 By the same token, there’s less readily available data to put into these models. The United States and other countries in the middle latitudes have hundreds of weather stations. But there are far fewer stations in the tropics because so much of that territory is covered by oceans. Also, many tropical countries lack the necessary funding to collect data via weather balloons, planes, drones and other costly devices.

Not being able to accurately predict the weather in the tropics, especially rain, has an outsized impact on the people who live there. Many make their living from farming, Dr. Judt said, and “it’s very difficult to plant crops and harvest when you don’t know when it will rain, how much it will rain and how long it will rain for.”

The tropics are also prone to extreme storms where “it just pours for hours and hours,” Dr. Judt said. Accurate weather predictions made farther in advance would better prepare communities and help prevent property damage, injuries and deaths resulting from flooding.

Dr. Judt’s findings, and those of scientists at Penn State and the University of Munich published in recent years, test the limits of a theory introduced in 1969 by Ed Lorenz, a prolific M.I.T. mathematician and meteorologist. He theorized that tiny disturbances in the atmosphere can build up and have vast impacts over time — a phenomena now known as the butterfly effect. This effect, he wrote, seems to ensure that predicting the weather more than two to three weeks ahead of time will always be mathematically impossible.

Scientists today call this roadblock the predictability horizon, a point of no return for weather forecasting. Anything beyond it is not much better than a random guess.

“Science has painted a fence around what it can do in a very spectacular way,” said Dr. Emanuel, who worked alongside Dr. Lorenz for more than three decades. No matter how much data you have or how powerful your computers are, he said, eventually your ability to improve “slows down and grinds to a halt.”

Additionally, the global weather models that are now in development can simulate showers and thunderstorms, Dr. Judt says, whereas existing models cannot. This, coupled with a series of weather satellites set to launch over the next few years, should translate to longer lead times for tropical forecasts.

“We should see an improvement in tropical weather prediction in the next 10 years,” he said.