Nicola Sturgeon’s post-independence plan for a ‘hard border’ between Scotland and England has been branded a ‘smugglers’ charter’ amid fears it will cause massive disruption and put jobs at risk.

The Scottish First Minister has outlined the future relationship between Westminster and Edinburgh if she achieves her dream of breaking up the United Kingdom.

The SNP leader admitted, as a result of her wish to take an independent Scotland into the EU, there would be a need for border checks between Scotland and England.

Her plans were immediately savaged by opponents of independence, who claimed the First Minister’s proposals would ‘divide communities’, cost businesses and put jobs at risk.

Concerns were also raised over Ms Sturgeon’s suggestion that physical checks might only take place at two of the around 25 border crossings between England and Scotland. 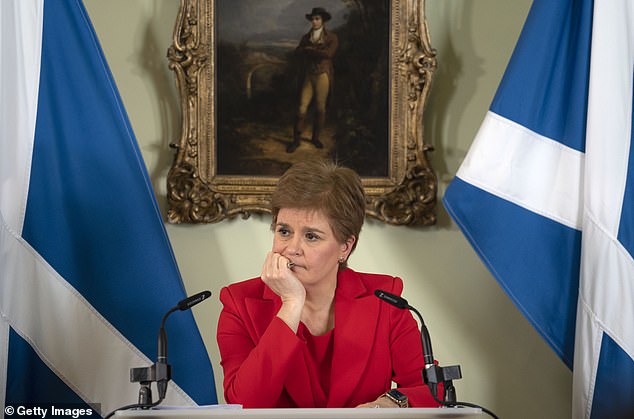 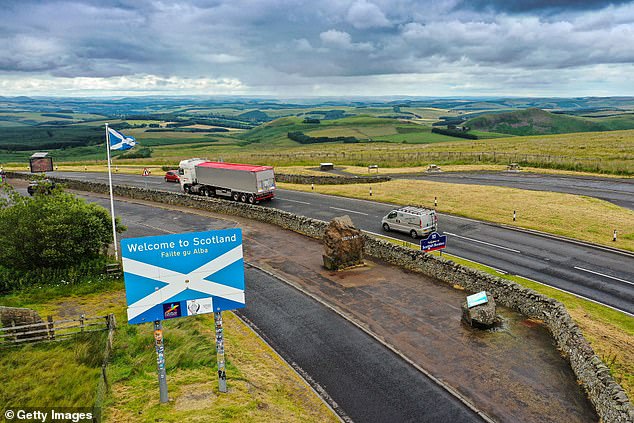 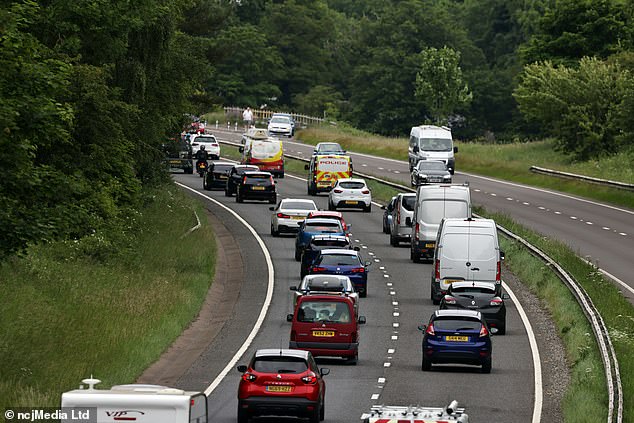 The SNP leader’s plans renewed fears of long traffic queues on the A1, pictured, and the A74(M) 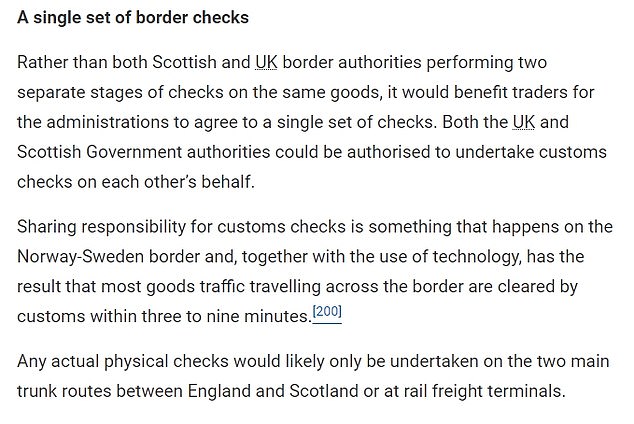 The First Minister has rubbished suggestions that Scots would require passports to visit relatives in England after independence as ‘utter nonsense’.

But she admitted on Monday, if an independent Scotland joins the EU, that ‘border arrangements will be required to ensure continued trade in goods and services across the UK’.

Ms Sturgeon insisted this was not ‘insurmountable’ although she acknowledged it would require ‘proper planning’.

The paper also pointed to the example of the Norway-Sweden border, which uses technology, as an example to follow because most goods traffic there is ‘cleared by customs within three to nine minutes’.

It was suggested that ‘any actual physical checks would likely only be undertaken on the two main trunk routes between England and Scotland or at rail freight terminals’.

This prompted renewed fears of long traffic queues on the A74(M) and the A1.

He said: ‘This is a smugglers’ charter that could lead to checkpoints along the border. The last thing Scots need is this manufactured chaos.’

John Lamont, the Conservative MP for Berwickshire, Roxburgh and Selkirk, expressed his fears over the impact of a ‘hard border’ on his constituents in the Scottish Borders.

‘I remember when the SNP used to accept a hard border as a bad thing,’ he wrote in the Scottish Daily Express.

‘Now, they champion it as some kind of badge of honour solely because that’s what happens in Scandinavia.

‘But the reality is even worse than they presented. The SNP plan would divide communities.

‘It would mean regular hassle for people travelling just a few miles south. It would cost businesses time and money every single day.’

Mr Lamont added that a ‘hard border’ would ‘put jobs at risk in the Borders and beyond’ during the cost-of-living crisis.

Willie Rennie, leader of the Scottish Liberal Democrats, branded the Scottish Government’s paper an ‘indulgent distraction’ to the country’s problems.

He said: ‘As we face a skills shortage and an economic slowdown the SNP are still determined to pursue a myopic agenda that would see us cut off trade with our closest partner.

‘The Scottish Government seem to have an utterly shambolic idea of what’s best for our economy.’

‘We have produced already three prospectus papers – we’ve got more to come in the series – where we’re setting out the case to the people of Scotland, giving them the information so they can make an informed choice,’ he told Good Morning Scotland.

‘It’s not possible to compare the well-informed choice that people in Scotland are going to make over independence with the back-of-a-fag-packet case that was presented to people before the Brexit referendum.’