There’s one key problem stopping Will Richardson from moving out of home, getting a new job and getting on with his adult life – the 19-year-old can’t get a copy of his birth certificate. 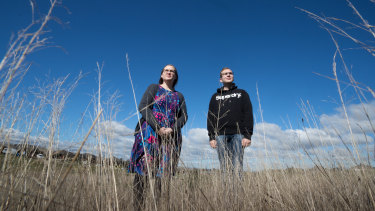 Will Richardson, 19, and his mother, Charlotte Robinson, have been trying to get a replacement birth certificate for him for over a year. Credit:Jason South

For over a year the university student from Wallan has been waiting for the document from the Victorian Births, Deaths and Marriages registry. The taxpayer-funded office shut its doors and closed its phone lines to the public in 2020 as the coronavirus pandemic took hold.

Without it, Mr Richardson, who lives with autism, can’t move forward.

He hasn’t been able to apply for his driver’s licence, which would give him independence and the ability to find work further away. He also needs that permit to rent a house with friends, and apply for casual worker coronavirus payments from Centrelink, which he needs as lockdowns have dried up his income.

Even more immediately, he has no valid ID to show he is a regional Victorian, which he needs to visit local businesses that have recently been released from lockdown while Melbourne stays closed.

“You have to prove who you are to buy a sandwich at the moment,” Mr Richardson said.

Despite 12 months of emails and phone calls, he’s hit a dead-end – he’s been told the certificate will come soon but now his emails go unanswered, his phone calls go nowhere. 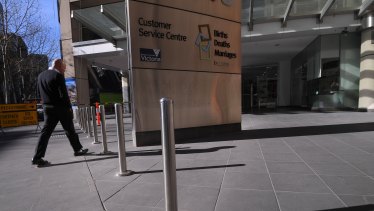 The Victorian Births, Deaths and Marriages office in Collins Street has been closed since the start of the pandemic. Credit:Eddie Jim

“It’s like six buttons to print it and send it off,” he says. “It’s inconvenient – if you’re going out of your way to give them what they need it’s like, ‘Can you please do your job?’ ”

Mr Richardson is far from alone in his frustration – the number of complaints about the registry to the Victorian Ombudsman more than doubled in the past year.

“Closing its office and temporarily shutting its call centre due to COVID-19 is behind the rise in complaints as people could not get in contact with anyone at Births, Deaths and Marriages.”

Although phone lines did reopen in May this year – albeit only until 2pm each day – Mr Richardson’s mother, Charlotte Robinson, said it hadn’t made a difference in her son’s case. The government has given no indication if or when people will be able to go to the registry in person.

“Something really ironic is that my father passed away in the UK in December and it was easier for me to get multiple copies of his death certificate from the UK, which was completely shut down, than it has been to get this done,” she said.

Ms Robinson, who tried to intervene on her son’s behalf due to his disability, said the pair had raised the issue with the Ombudsman but were still awaiting a response.

The Sunday Age has spoken to a number of Victorians whose lives have been affected by delays at the registry, including people who needed relationship certificates to apply for visas or to finalise divorces, and parents who needed birth certificates to enrol children in school.

Death certificates are necessary for accessing wills and finalising estates.

A spokeswoman for the Department of Justice and Community Safety said the closure of the registry’s phone lines last year was “in line with public health advice”, but she did not respond to questions about when the Collins Street office would reopen to the public.

The registry is issuing an average of 6000 certificates and responding to more than 4000 emails each week, she said, as well as answering close to 1000 calls every day since the phone lines reopened.

She noted that Victorians could access in-person births, deaths and marriages services including lodging applications, making payments and submitting identification at a number of local Justice Service Centres around the state, but those centres were unable to issues certificates.