Mexico City: Representatives of the Venezuelan government and the opposition have begun a round of talks in Mexico City aimed at ending a five-year political impasse and addressing the South American nation’s economic collapse, which has caused millions to flee.

Unlike previous negotiation efforts, the talks will include more than a dozen countries, among them the Netherlands, Russia, Bolivia, Turkey and Norway, which will act as the facilitator.

At the National Museum of Anthropology, the parties agreed to a memorandum of understanding containing the road map that will guide the dialogue process.

In the MOU, the parties agreed to discuss, among other topics, a schedule for elections with international observers, lifting of sanctions on Venezuela and the “restoration” of the right to use Venezuelan frozen assets abroad. 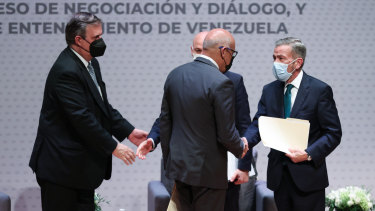 Jorge Rodriguez, president of the National Assembly of Venezuela and Gerardo Blyde Perez, head of the opposition delegation of Venezuela shake hands, right, at the start of talks in Mexico City.Credit:Getty Images

Venezuelan President Nicolas Maduro wants sanctions imposed by the United States and Europe on officials and institutions be lifted. Venezuela says the sanctions are responsible for the OPEC member’s economic crisis. He said he would send his son, Nicolas Maduro Guerra, to Mexico.

For its part, the opposition coalition calls to allow humanitarian aid, including vaccines against COVID-19, to enter into Venezuela; the release of dozens of supporters whom it considers “political prisoners;” and guarantees it will be allowed to participate in regional elections in November.

“We already know what we do not agree on. […] The job now is to find points of confluence to guarantee the future and the happiness of the people of Venezuela,” Jorge Rodriguez, president of Venezuela’s parliament, said at the beginning of the talks. 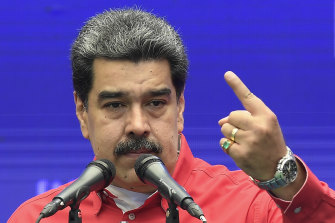 Venezuela’s President Nicolas Maduro says he will send his son to the talks.Credit:AP

Dag Nylander, representative of the Norwegian government, struck an upbeat tone and declared that the talks deserve “strong support from the international community.”

The sides are trying to reach an agreement ahead of elections on November 21 for mayoral and gubernatorial posts across the country. Opposition parties have boycotted several previous votes, arguing they lacked basic safeguards to make them free and fair.

The return to the negotiating table represents a turnaround for the opposition, which in the past accused Maduro of using dialogue to buy time and defuse international pressure. The Venezuelan government abandoned the 2019 dialogue, which took place in Barbados and Norway, after the United States tightened sanctions. 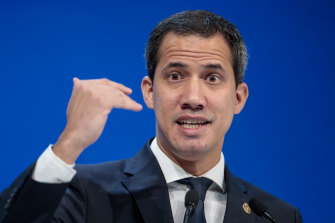 Juan Guaido, opposition leader in Venezuela, who is recognised by 50 countries as the interim president.Credit:Bloomberg

“Today we are beginning the second stage of a negotiation process that we know will be complex, which will surely have very difficult moments,” said Gerardo Blyde, chair of the Venezuelan opposition delegation.

“Between these two sidewalks where each party supports narratives that seem diametrically opposed is a street full of hopeless and suffering citizens, our people,” he added.

US President Joe Biden has not relaxed sanctions against the financial and oil sectors of Venezuela since taking office in January and has maintained support for opposition leader Juan Guaido, who declared himself interim president in January 2019 after claiming there was fraud in Maduro’s 2018 re-election. More than 50 countries, including Australia, recognise Guaido as the legitimate interim president.

The Venezuelan crisis has generated a massive exodus towards the United States, Brazil and Bolivia, that the Organisation of American States recently estimated would reach 7 million people by 2022, the largest in the world, exceeding those who fled the conflict in Syria.