A pregnant mother who shot and killed her husband in self-defense and convicted drug dealers were among the six Americans granted full pardons by President Biden.

The White House said the candidates were chosen because they have served their sentences and gone on to improve lives of those around them.

They have served in the military, survived domestic abuse and volunteered or served to help their community.

They add to the thousands who had their convictions for simple marijuana possession overturned by Biden earlier this year.

Ibn-Tamas, now 80, shot and killed her husband, neurosurgeon Dr. Abdur Ramad Yussef Ibn-Tama, when she was pregnant at age 33 in 1976. 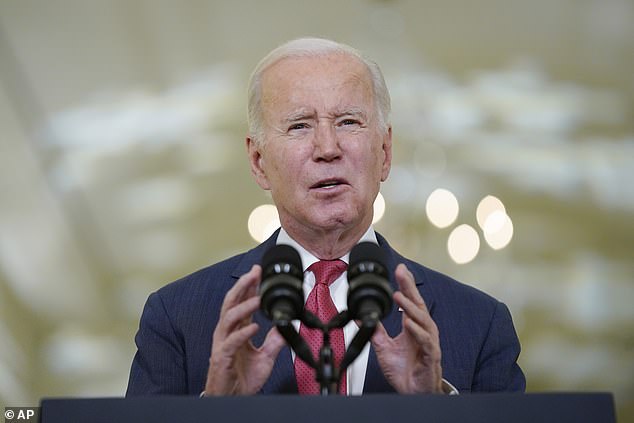 She testified that before her death she was beaten, verbally abused and threatened by him.

During her trial, the court refused to allow expert testimony regarding battered woman syndrome, and she was given five years in prison.

Her appeal, according to the White House, was the first step towards battered woman’s syndrome being recognized in the judicial process.

In the years since she her release she has worked as the Director of Nursing for an Ohio-based healthcare business. At age 80, she is still a case manager.

She raised the children fathered by her husband alone.

‘President Biden believes America is a nation of second chances, and that offering meaningful opportunities for redemption and rehabilitation empowers those who have been incarcerated to become productive, law-abiding members of society,’ a White House spokesman said in a statement.

‘The President remains committed to providing second chances to individuals who have demonstrated their rehabilitation – something that elected officials on both sides of the aisle, faith leaders, civil rights advocates, and law enforcement leaders agree our criminal justice system should offer.’

Gary Parks Davis is a 66-year-old man who pleaded guilty to use of a communication facility (a telephone) to facilitate an unlawful cocaine transaction at age 22. Mr. Davis served his six-month sentence on nights and weekends in a county jail.

He completed probation in 1981. After his offense, Mr. Davis earned a bachelor’s degree and worked steadily, including owning his own landscaping business and managing construction projects.

He has also been engaged with his community over the past decades, serving as the president and treasurer for the local high school’s booster club, even after his children graduated, and performing civic works and fundraising as a member of the local rotary club and chamber of commerce.

Edward Lincoln De Coito III is a 50-year-old man who pleaded guilty to involvement in a marijuana trafficking conspiracy at age 23; his involvement was limited to serving as a courier on five or six occasions.

Mr. De Coito began his term of imprisonment in March 1999, and was released from custody in December 2000. Prior to his offense, he honorably served in the U.S. Army and the Army Reserves.

In the course of his service, he received numerous awards, including the Southwest Asia Service Medal, Army Good Conduct Medal, and the Humanitarian Service Medal.

After his release, Mr. De Coito worked as a skilled electrician for approximately 15 years and then embarked on a second career as a pilot.

Vincente Ray Flores is a 37-year-old man who, at approximately age 19, consumed ecstasy and alcohol while serving in the military; he later pleaded guilty at a special court-martial.

Mr. Flores was sentenced to four months’ confinement, forfeiture of $700 pay per month for a fourmonth period, and reduction in rank to E-2.

In exchange for his plea, the convening authority directed his participation in the Air Force Return to Duty Program, which is a six-month rehabilitation program that provides selected enlisted offenders with a chance to return to duty after therapy and education.

His conduct and efficiency ratings have been outstanding. Further, Mr. Flores serves on the Honor Guard, has helped train others for Honor Guard ceremonies, and has volunteered for a number of causes through his military units.

These include Habitat for Humanity, a cancer research fundraiser, and events for military members returning from deployment.

Ann Ibn-Tamas is an 80-year-old woman who was convicted of murder in the seconddegree while armed for killing her husband.

Ms. Ibn-Tamas, 33 at the time of the incident, was pregnant and testified that before and during her pregnancy, her husband beat her, verbally abused her, and threatened her.

According to her testimony, her husband had physically assaulted her and threatened her in the moments before she shot him.

During her trial, the court refused to allow expert testimony regarding battered woman syndrome, a psychological condition and pattern of behavior that develops in victims of domestic violence.

Ms. Ibn-Tamas was ultimately sentenced to a term of one to five years’ incarceration, with credit for time served. Ms. Ibn-Tamas’s appeal marked one of the first significant steps toward judicial recognition of battered woman syndrome, and her case has been the subject of numerous academic studies.

Until recently, Ms. Ibn-Tamas was the Director of Nursing for an Ohio-based healthcare business, and, at the age of 80, she continues to work as a case manager there. She raised the two children fathered by her husband as a single mother; her children have earned advanced degrees, and her daughter is now an attorney.

Charlie Byrnes Jackson is a 77-year-old man who pleaded guilty to one count of possession and sale of distilled spirits without tax stamps. The offense, which occurred when Mr. Jackson was 18, involved a single illegal whiskey transaction, and resulted in nominal loss to the government. In 1964, he was sentenced to five years’ probation.

Mr. Jackson attempted to fulfill his dream of enlisting in the United States Marine Corps after his high-school graduation in 1964, but was rejected due to the federal conviction.

Mr. Jackson completed his probation term in June 1969. Mr. Jackson has been an active member of his church since 1987, and he has helped many community members in need and used his carpentry skills to maintain and renovate the church buildings.

John Dix Nock III is a 72-year-old man who pleaded guilty to one count of renting and making for use, as an owner, a place for the purpose of manufacturing marijuana plants.

Mr. Nock accepted responsibility for his crime, which occurred 27 years ago. Mr. Nock did not cultivate marijuana and played no role in the grow-house conspiracy. In 1996, he was sentenced to six months’ community confinement in lieu of imprisonment, followed by three years’ supervised release.

In lieu of forfeiture, Mr. Nock paid the government the value of the home he rented to his brother. Mr. Nock completed his community confinement in March 1997, his term of supervised release ended on March 23, 2000, without incident. Mr. Nock operates a general contracting business.

Mr. Nock mentors young contractors through a professional networking group, and since 1999, he has helped to organize an annual fishing tournament to benefit abused young men