Singapore: Eight months before the 20th anniversary of the Bali bombings, an Australian plan to build a memorial park where the Sari Club once stood is back on the table after the landowners agreed to sell a portion of the site for $4.5 million.

The plot in Kuta has sat vacant in the nearly two decades since the terrorist attacks of October 12, 2002 that killed 202 people including 88 Australians.

In the intervening years it has been the subject of much discussion as the Perth-based Bali Peace Park Association sought to acquire the land to establish a spiritual garden on it.

The group last November withdrew its bid for the property, slamming a $15 million price tag set by the owners for the 1500 square-metre site and saying its vision had been “blocked by greed”.

Now, however, the idea of a peace park has been revived after the association’s founder and former leader, Dallas Finn, struck an agreement with owner Sukamto Tija to sell a third of it, a 567sqm section of the land, for $4.5 million.

“I successfully with my Indonesian counterparts now have a MOU from Mr Sukamto agreeing to the sale,” Finn told The Sydney Morning Herald and The Age. 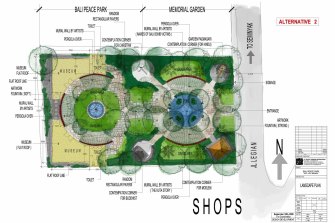 The original design for the peace park by renowned landscape architect Made Wijaya.

“Mr Sukamto has made a generous offer of just under 600sqm directly opposite the memorial.“

The owner planned to build a hotel at the rear of the site, Finn said.

Hopes that the long proposed park could finally come to fruition, though, hinge on the Australian government stumping up a significant portion of the money to buy the land.

Federal, state and territory governments have previously pledged a combined $849,200 to help fund the acquisition of the land – including $450,000 offered by the Labor governments of Julia Gillard and Kevin Rudd. The Bali Peace Park Association had also raised nearly $1 million in the years since it was established but that would still leave a shortfall of more than $3 million.

During the 2019 federal election, the owners of the site ramped up the asking price after Scott Morrison and Bill Shorten both quietly promised the Bali Peace Park Association millions of dollars of taxpayers’ money to help purchase the land.

Finn said the $4.5 million price equated to a cost of only 17 cents for every Australian and he had been given two months by the owner to complete the deal. 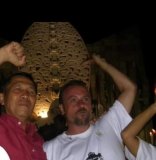 Dallas Finn, right, with Made Mangku Pastika, the former police chief and governor of Bali who led the investigation into the bombings in 2002.

“I’m calling on the Foreign Minister to come to the table with a formal letter so I can present to Mr Sukamto that we have a deal and the park will be in place by October,” he said.

With the Bali Peace Park Association having ceased its bid for the land, however, a spokesperson for Australia’s Department of Foreign Affairs and Trade said on Monday night that “any new proposal would need to be formally developed and carefully evaluated”.

“The Australian government has supported and assisted plans for a peace park on the site of the former Sari Club in Bali,” the spokesperson said.

“The Australian government has previously been liaising with the Bali Peace Park Association (BPPA) which, for many years, sought to purchase the land on which the Sari Club stood to develop another place of reflection for those impacted by the tragic events of 2002.

Luke Gosling, a Northern Territory federal Labor MP who has led several party delegations to Indonesia, believes the building of a peace park in time for the 20th anniversary of the bombings is also a “great opportunity to reconnect with Bali as COVID subsides”.

“It’s a powerful thing for us to be doing and also something that we can lead on,” Gosling said.

“The federal government should make a contribution. They had previously made a commitment for some serious funding. But there will be other countries that will want to contribute and some private donors.”

According to Finn, the agreed sale price includes compensation for the owners who have had no revenue stream from the land for the past 20 years. He claimed Bali Peace Park Association chairman David Napoli had been wrong to label them greedy.

Residents and tourists at the scene of the Bali terrorist attacks of 2002.Credit:Radar Bali/AP/File

Perth’s Carla Huppatz lost her mother Tracy Thomas, who was then 41, in the blasts, welcomed the news that the peace park could still be built.

“The memorial [in Bali] is beautiful. But to have somewhere where you can sit and contemplate that’s not quite on a street corner would be amazing.“

British woman Sue Cooper, who lost her brother Paul Hussey in the bombings, said the memorial garden on the Sari Club site would give victims’ families and survivors a place to “reflect and remember loved ones”.

The Bali Peace Park plans were originally designed by renowned Bali-based Australian landscape architect Made Wijaya, who once designed a garden for David Bowie and who died in 2016.

Finn said he was working with Wijaya’s team to adapt the design to the land the owner has agreed to sell.