London: When France introduced speed cameras 20 years ago, it drastically reduced the number of car accidents and helped save tens of thousands of lives. Now the government is taking aim at another scourge: the earsplitting noise that has been a fact of life for residents of French cities.

New sensors, or “sound radars”, were placed in seven cities last week as an experiment. The sensors can detect and take pictures of vehicles making excessive noise, a problem that officials say has gotten worse in recent years. The hope is to eventually set a noise-pollution limit and fine those motorists exceeding it. 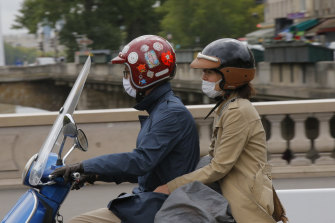 “If the mayor didn’t buy a radar, we would have bought one ourselves,” said Raphael Bianchi, who lives in the Place de la Bastille in Paris. He said his one-year-old son was constantly awakened by motorcycles roaring outside their apartment: “It’s unbearable — it’s a constant acoustic aggression.”

The initiative follows a mounting intolerance by the French to street noises, particularly motorcycles and souped-up scooters. According to a study by Bruitparif, a state-backed centre that monitors noise in the Paris area, a modified scooter crossing Paris at night can wake as many as 10,000 people.

The centre developed the sensors being tested in Paris. At the end of the testing period in 2023, the city plans to start handing out fines of €135 ($212) to vehicles that break noise-level rules.

The sensor project is part of a broader plan by the city to tackle noise, which health officials say is a real health risk.

“Noise reduces the life expectancy of Parisians by nine months,” said David Belliard, a deputy mayor in Paris, citing studies carried out by a regional health agency and Bruitparif. “It’s a matter of public health.”

Other measures include lowering the speed limit and planting forests along the city’s often clogged ring road. Dan Lert, a deputy mayor in charge of the plan, said that the authorities also wanted to ask emergency vehicles to turn down their sirens at night.

Lert said the initiative was also a way to fight inequality, given that most housing projects are built next to loud thoroughfares. “People who live in social housing are the most exposed to noise,” he said.

After air pollution, noise is the second-biggest environmental factor causing health problems, the World Health Organisation said in a 2011 report, increasing the risk of cardiovascular disorders and high blood pressure.

Fanny Mietlicki, director of Bruitparif, said the toll taken by loud streets could also be measured financially, in a loss of productivity caused by disturbed sleep and in the devaluation of property along busy streets. The total cost for France, she estimated, was €147 billion per year.

Calls to limit noise in cities intensified after the pandemic lockdown, Mietlicki said.

“People rediscovered calm,” she said. “They could hear birds sing in the city.”

One group called Ras Le Scoot, or Enough with the Scooter, is lobbying against loud motorised scooters and motorcycles. The group said it welcomed the new noise sensors, but said vehicles would just take different routes to avoid them, and they would not stop people from modifying engines to make them louder.

“Toxic masculinity,” said Franck Olivier-Torro, a spokesman for the association, describing the practice.

Yves Ferraro of the Federation of Angry Bikers, a group that protects the rights of motorcycle users, said that “most bikers are well-behaved” but he admitted that there were some who liked to “make a noise from hell” by revving their engines at stop lights. He said that repressing and punishing such behaviour was not the way to go.

“If there was some dialogue and education, I think things would go much better,” he said.

Sébastien Kuperberg, who lives on the fourth floor of an elegant building in the east of Paris above an intersection, was sceptical about that approach. When the traffic light downstairs turns green, he said, “We just can’t have a conversation”.

He added that he could not listen to music, the radio, or TV with his windows open, and even when they are closed, the sound of motorcycles accelerating wakes him up at least once a night.

Kuperberg, who is moving out of his apartment in two weeks largely because of the noise, was happy about the new noise sensors but said the move should be considered just a first step. “I am for the total ban from Paris” of motorcycles, he said. “I just can’t bear to see them anymore.”