Though Grey’s Anatomy’s David didn’t come right out and tell Meredith, “I’m going to make you an offer you can’t refuse,” that was kinda exactly what he did in Thursday’s episode. But would she really leave Grey Sloan to move to Minnesota, join his team and get serious with Nick? Read on, and we’ll discuss not only how far she got in her decision-making process but also the “hi” note Zoey’s Extraordinary Playlist alum Skyler Astin hit in his debut and the python that snaked its way into the hospital’s parking lot. 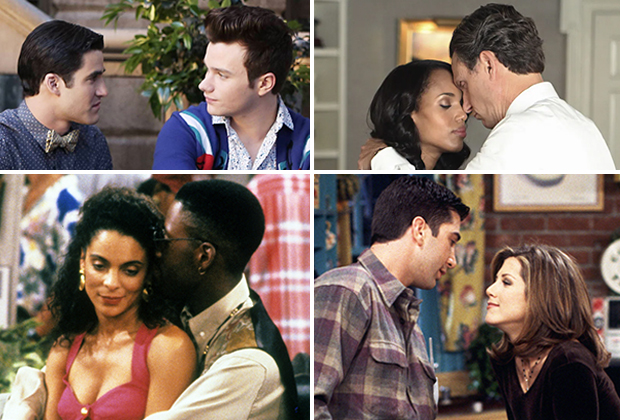 ‘NOT EVERYONE BELONGS IN AN ER’ | As “Put the Squeeze on Me” began, Bailey and Ben relished having Pru now in their custody (via an agreement struck with the Millers during Station 19). Warren also relished teasing his wife about Jordan’s kiss. (Who wouldn’t?) At Jo’s, she and Luna were dealing with Link and Scout no longer residing there. At Richard and Catherine’s, she marveled that he was still calling Levi (to no avail). And at Owen and Teddy’s, Megan revealed that their dining room was now her brother’s gym. In Minnesota, David, before The Clinic’s staff, extended an offer to Meredith to stay on permanently and run the Grey Center. Needless to say, that was music to Nick’s ears. At Grey Sloan, Jordan awkwardly reported for duty on Bailey’s service. Just then, a fella came running in saying that his boyfriend was in the car with Gigi… who turned out to be a Burmese python! With that, we were off and running! 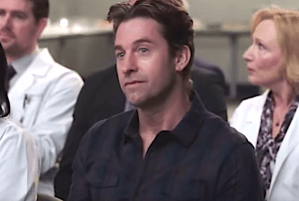 Back in Minnesota, Mer told Nick that she was done with the Parkinson’s research. So “what if I just wanna go home and spend time with my kids?” She could still do that, her beau said. Though David understood that she felt ambushed by his public job offer, he nonetheless tempted her with the Grey Center’s just-approved budget and the number that would be her salary. Alone with Nick, Mer said that she wasn’t ungrateful for the offer, but it complicated things. She hadn’t realized that the millions David was offering could help Nick’s research. What? he said. “You think I’m in a relationship with you to get grant funding?” It seemed to him that she took good things and then looked for ways to make them harder than they needed to be. She could have a life there with him. But the choice was hers to make. Later, Kai apologized to Mer for David’s ambush and expressed their hope that he hadn’t scared her away. And yes, they were seeing Amelia. And yes, David was impossible — but he’d also been super supportive when they’d changed their name and pronouns. 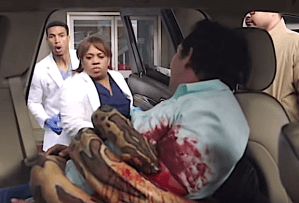 ‘I HAD A QUESTIONABLE PINEAPPLE THIS MORNING, SO IT COULD BE THAT’ | After Taryn retrieved Richard to consult on the snake case and she saw what they were dealing with, she just said, “No, no, no” and backed the hell away. Turned out, Gigi had been the patient’s second-grade class’ pet… and she’d just kept growing and growing. When Maggie discovered how into snakes Winston was, she gasped, “Who are you?” Someone whose knowledge of snakes was going to be a great asset, it soon seemed. Rubbing alcohol sprayed around Gigi’s mouth would irritate her and make her loosen her bite, Winston explained. So Richard sprayed… Oh, no. Actually, Bailey jumped in to spray some rubbing alcohol instead. Once Gigi released the patient, Link and Jordan uncoiled the snake and helped the man out of the car (leaving the snake inside). Soon, a CT of the patient revealed that his abdominal organs had been squeezed into his chest cavity. Operating on the patient, Winston mortified Bailey by telling Jordan about his crush on his mentor — to whom he was now married. Things went so badly in the O.R. that the surgery had to be put off till the next day. But the patient’s condition took such a sudden turn for the worse en route to the ICU that it couldn’t wait. 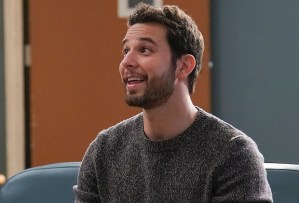 ‘I HAVE NOW MENTIONED MY PHD TWICE, AND YOU THINK I’M GROSS’ | Elsewhere, Jo and Link admitted that they missed one another. “For the record,” he added, “I blame Amelia.” She ruined everything in his life, so why not his friendship with Jo, too? Hilariously, Jo liked “Petty Link.” When Maggie and Jo were called in to treat a pregnant woman named Laurie — weak heart valve — we also met her concerned brother, Todd (Astin). Immediately, Laurie took a shine to Jo and tried to set her up with Todd. But he managed to charm her pretty thoroughly himself. Operating on Laurie, Jo insisted to Maggie that she couldn’t possibly deal with dating while also working and raising Luna. It was touch-and-go in the O.R. for a minute, but Jo saved the day — and Laurie. (Owing to the complication, her actual procedure would have to be performed another day.) When Jo reported to Todd that his sister’s heart had briefly stopped, but she was fine, the twosome turned it into an opportunity to flirt some more. “We’re not weird Game of Thrones siblings,” he made clear. That being the case, she asked him out for a drink at Joe’s with an E.

‘YOU’RE EASIER TO READ THAN LEO’S DR. SEUSS BOOKS’ | Before Megan and Farouk headed back West, she made sure to insist that Owen and Teddy talk about whatever was troubling them as soon as their house was no longer full. “Fix it,” she ordered on her way out the door. “Love you.” Once the marrieds were alone, they bickered about his PT before they full-on started fighting about the way Owen was helping dying veterans pass on their own terms. (Lord, they’re exhausting, said my household in unison.) Teddy was still for death with dignity but was livid that, without a word to her, Owen had made a decision that put their family at risk forevermore. During the height of their argument, she walked away, and miraculously, he walked after her. Who needs PT? 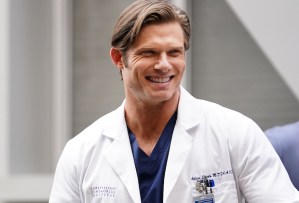 ‘TRUST ME THAT I WILL TALK YOU OUT OF DOING SOMETHING STUPID’ | As the episode neared its conclusion, Amelia tried to be friendly to Link, but he wasn’t ready to make small talk. So she reminded him that he had never wanted them to end up like his parents. “I need to hate you for a little while,” he said, “because when I can’t hate you, I love you, and we can’t have that, right?” Alas, no. The guy Gigi hugged way too hard was still alive at the end of the hour, but Bailey could only promise his partner that they’d do everything that they could. “What you did today was an education on so many levels,” Jordan told her. But he assured her that his crush would go no further — even though she’d sent him a signal. Wait, what? “I see you, and I felt it,” he said. As Jo was heading out on her date, Link was dying to unwind with her. (Cue his sad look as she left the hospital with another guy. To be clear, that is not a picture of his sad look.)

At Owen and Teddy’s, she admitted that she was as exhausted as we were by them. She wasn’t going to leave him, but she needed to know that she and the kids came first. Next time, whatever he was going to do, he had to, had to, had to come to her before he did it. Deal? Deal. Or so it seemed. At Bailey and Ben’s, she wondered aloud if they were “ignoring the snake” by sending mixed signals to people like Ingrid (from Station 19) and Jordan. “Are we feeding a life that’s squeezing our marriage to death?” she asked. Maybe, he admitted. But he wasn’t available to anyone but her. Some quality “we time” was clearly in order. At Richard and Catherine’s, he confessed to his wife that he’d made a bad call with the snake guy — maybe he was the person who didn’t belong in an ER. So he asked for an assessment to figure out whether he should hang up his stethoscope. Finally, at Mer’s house, she reunited with her kids — and at last introduced them to Nick. Biiig step. “Do you like chocolate pudding surprise?” asked Ellis. “Only if the surprise is gummy worms,” he replied. Point scored.

So, what did you think of “Put the Squeeze on Me”? Will Mer leave Seattle, giving the show two settings forevermore? Or will Nick move to Seattle? Also, your reaction to Jo/Todd? Hit the comments.