Simple SMS messaging is so passé. Nowadays, there are hundreds of chat apps ready to connect friends in new and inventive ways.

But the app that is capturing a lot of attention recently is Houseparty, the party video chatting app that’s been bought by Epic Games, the company behind global gaming juggernaut Fortnite. 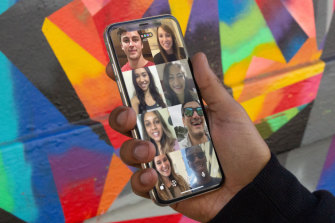 Let’s get the party started: Up to eight friends can join the chat in the Houseparty app.

When you’re creating a room, the app suggests all kinds of goofy conversation starters, most of which sound false but might be true (does Wyoming only have two escalators?). Your friends get a notification so they can join, but there is also the option to only notify some of your friends, or make a private party where you handpick who's allowed to join.

You can open up your room to people who are nearby, or choose not to have location services turned on. People in the house party can play games together, like Ellen DeGeneres’ app game Heads Up, as well as Trivia and other party games to fill any lull in the conversation.

Although some parents are concerned about the potential for cyber bullying, especially since some rooms allow friends to invite their friends and so on, it’s basically one of those old school Telstra three-way phone calls on steroids.

While that does have the potential for abuse (such as in the Mean Girls case), so does any technology that allows people to communicate. Human interaction can sometimes be fraught with unpleasantness, but the good experiences usually outweigh the bad.

Houseparty has been praised as one of the best ways to keep in touch with friends or family who are all over the world because the app is easy to use, and doesn’t have public profiles.

Although roughly two thirds of the app’s userbase is under the age of 25, it’s user-friendly enough that grandparents will be comfortable joining in.

Of course, Houseparty isn’t the only chat app outside the traditional messaging services WhatsApp and Facebook Messenger people use to stay in touch, while avoiding SMS or calling limits built into their phone plans.

However, the apps' popularity overseas means that they spread easily to Australia, popularised by social media influencers, popular entertainment stars and frequent travellers.

Here are some of the top chat apps worth checking out:

Snapchat is still king, particularly with high schoolers. Snapchat allows users to send each other pictures and messages that can expire after a set period of time.

Discord is primarily used by gamers and is more like the traditional chat rooms of old, though with extra community-building features.

Squad is similar to Houseparty, but also allows screensharing, which is great for getting tips on Tinder dates and video games.

Telegram is one of the most popular messaging apps in the world because of its reputation for security. Its voice over IP (VOIP) calls and "secret chats" have end-to-end encryption that means no one other than you and the person you’re messaging can read them.

However, it doesn’t feature that encryption on regular messaging chats, which are only encrypted between you and the Russian server. Still, the self-destruct feature on the messages in “secret chats” can be helpful for those who don’t want to take any chances.

Wickr became well known in Australia after it was revealed that it was used by Malcolm Turnbull, Scott Morrison and other Liberal Party plotters during the 2015 leadership crisis. It’s another app that’s famous for its serious encryption and self-destructing messages, favoured by adulterers, sexters and anyone who doesn’t want someone else reading their conversations.

GroupMe, as the name implies, is for group chats and organising gatherings with friends. It also allows for group calls and seeing approximately where your friends are on a map.

WeChat is one of the largest social media apps in the world, with multi-purpose messaging and mobile payment options. It’s a massive deal in China, which is the origin of most of its one billion monthly active users.

LINE is another hugely popular Asian messaging and social media apps with voice and video calls, messaging and its famous stickers.

Kik is set up for one-on-one or group messaging, allowing users to share photos, videos, gifs and games, as well as find and chat with strangers with similar interests. Because it’s not tied to a real name or phone number, it allows users to be anonymous, which can be great, except it also has a reputation for being ‘the defacto app for child predators’, according to Forbes.

BAND is centred all around group messaging, and helps users organise events. It’s particularly favoured by sports teams, gaming groups, families and bands because of the built-in calendar and ability to set up polls.