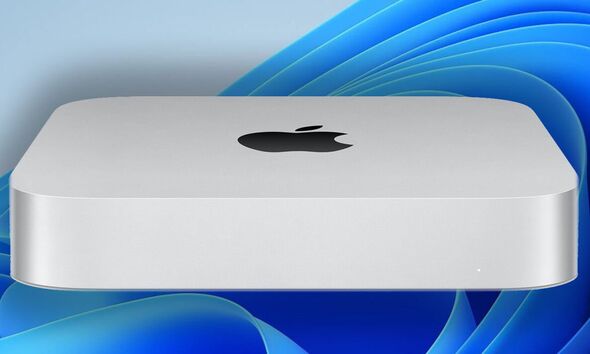 There’s a brand-new Mac arriving in stores next week and it might convince some Windows users to consider switching sides. The fully rebooted Mac Mini, which will go on sale from January 24, comes packed with Apple’s very latest M2 processor inside and that looks set to make it supremely powerful.

In fact, Apple is boasting that its palm-sized PC will be up to 5 times faster than the bestselling Windows desktop. That’s quite a statement and there’s another reason why this Mac might be worth considering as it’s surprisingly cheap.

At launch, the starting price for the new Mac mini will be £649 making it pretty good value. Of course, that price doesn’t include a screen, keyboard or mouse but if you already own those accessories this is the cheapest way to get a superpowered Apple computer.

Along with selling the Mac mini with the standard M2 chip inside, Apple is also releasing a more expensive model that gets the even faster M2 Pro brains.

This upgrade makes the machine up to 50 percent faster at tweaking images in Photoshop than the firm’s older 27-inch Intel-powered iMac.

Those who edit videos will also find they can simultaneously play up to five streams of 8K ProRes 422 video at 30 fps which is pretty impressive.

This M2 Pro Mac mini does cost over £1,300 but might be worth considering if you think your digital daily routine will push things to the limit.

Along with work, Apple says the new Mac mini will offer stutter-free gaming and its small size means it won’t clutter up the home office.

Both models also have Wi-Fi 6 inside for faster access to the web.

“With incredible capabilities and a wide array of connectivity in its compact design, Mac mini is used in so many places, in so many different ways. Today, we’re excited to take it even further with M2 and M2 Pro,” said Greg Joswiak, Apple’s senior vice president of Worldwide Marketing. “Bringing even more performance and a lower starting price, Mac mini with M2 is a tremendous value. And for users who need powerful pro performance, Mac mini with M2 Pro is unlike any other desktop in its class.”

Along with this boost to the Mac mini, Apple has also unveiled new 14-inch and 16-inch MacBook Pro laptops which are now powered by the M2 chip making them around 20 percent faster than the previous M1 machines.

All of these devices will arrive in stores next week.