Online safety advocates are urging tech giant Apple to follow Google’s lead and remove an app operated by an anti-lockdown, anti-vaccine group involved in recent COVID-19 protests around the country

The internet giant removed the app this month, cutting off a financial lifeline for Reignite – one of a constellation of fringe groups spurring sporadic protests across the country – after the group refused to remove content deemed medical misinformation.

However, the Apple version of the app, which contains a directory of businesses that have vowed to effectively admit unvaccinated shoppers because they “refuse to enforce unlawful directions from corrupt governments”, remains accessible for an annual subscription of $43.99. 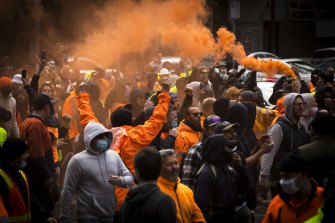 Reignite Australia has advocated protests during the pandemic that have attracted a mix of people angry about pandemics mandates, lockdowns and vaccines.Credit:Chris Hopkins

The app, which is not popular, also has a feed of Reignite’s posts and a basic social network.

Facebook has twice removed Reignite’s pages in recent months for breaching its rules on COVID-19 and vaccine misinformation, a spokeswoman for Facebook’s parent company Meta said, making Reignite’s app critical to spreading its message and its financial fortunes.

It joins a growing number of platforms appealing to the far right of politics, competing with US-based alternatives such as Gettr and Parler, which are both popular with supporters of former US president Donald Trump and claim they will provide a free speech haven.

The apps pose a challenge for Google and Apple, which are having to grapple with how interventionist they will be in their app stores, as they balance the risk of helping spread conspiracy-tinged information against the spectre of impinging on free speech.

Apple and Google took Parler off their stores in January, just after it saw a boom in conservative users unhappy with Facebook and Twitter’s fact-checking around the last US presidential election. It has since returned to Apple’s App Store.

“It’s a strange scenario where you’ve got Google, who have allowed a lot of this content to proliferate on [its video-sharing subsidiary] YouTube now one step ahead of Apple at this point.”

On its website, Reignite describes itself as an advocacy group and aspiring media outlet committed to liberty and individual freedom. It claims it is not “anti or pro-vax” but instead favours choice. As a result, it says it opposes vaccine mandates.

But on the encrypted messaging app Telegram it has claimed, incorrectly, that “vaccinating 12-15 year olds does NOTHING” and posted an image saying “Omicron is vaccine adverse reactions” as a “calculated opinion”. That is also false. Omicron is a variant of the original COVID-19 virus.

In a post on Reignite’s website dated December 6, a spokeswoman said Google “wanted us to remove content they labeled as ‘Medical Misinformation’. We would not do this as it was a member of RDASocial and free speech is adhered to.”

“Perhaps we were naive in thinking we could use these types of platforms,” she said, offering refunds.

Apple has policies for its apps that prohibit false information or anything that could cause physical harm. Google has a more specific policy that bans apps that contain misleading claims, including about medical or health matters.