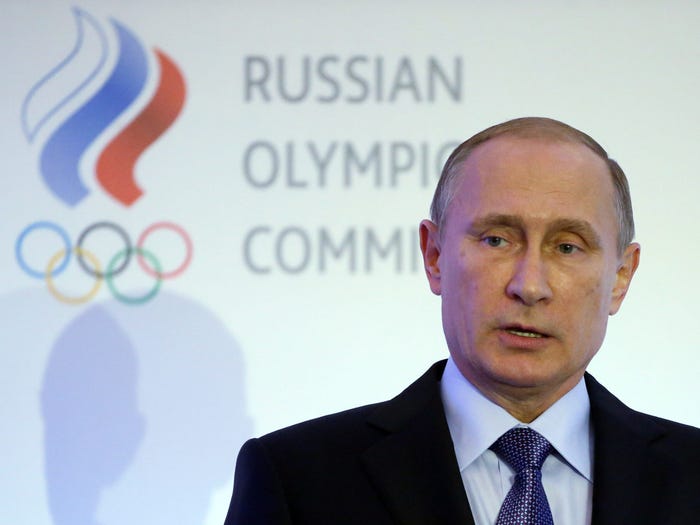 Russia's high-profile doping scandal will officially keep the country out of official international sports competitions for the next two years, including the Olympics, World Cup, and more.

A ruling issued by the Court of Arbitration for Sport on Thursday bars individual athletes and teams from competing on behalf of Russia at some of the most prominent sporting events in the world. Competitors who participate in the Olympics, World Cup, and other World Championships will not be permitted to don Russian iconography, brandish the Russian flag, or play the national anthem in an offical capacity.

There is a significant history of Russian athletes competing under a neutral flag at past Olympic games. At the PyeongChang 2018 Olympic Winter Games, Russians competed under the designation "Olympic Athlete from Russia," while athletes hailing from the former Soviet Union competed as the "Unified Team" at the games in 1992. Still, the impact of Russia's latest World Anti-Doping Code violation on individual athletes and teams remains somewhat nebulous.

Yes, athletes can compete for medals and world titles so long as they were not personally implicated in the doping scandal. But any hardware collected by said athletes will not forrmally count towards Russia's totals, eliciting the obvious question of how the country's athletes and teams will be remember in history and record books.

The repercussions from Russia's state-sponsored doping scheme and subsequent cover-ups transcend the country's competition ban. For the next two years, Russia is embargoed from hosting or bidding to host the Olympics or World Championships, a significant blow to a nation that regularly pitches its cities for major sporting events. The ruling also prohibits Russian government officials, including President Vladimir Putin, from attending said events. Additionally, the country must pay $1.27 million to cover costs associated with an investigation into its offenses.

Thursday's decision marks a two-year reduction of the original four-year punishment issued following the World Anti-Doping Agency invesigation that found Russia guilty of manipulating laboratory data to mask banned substances in its athletes. While WADA officials were largely encouraged by the results of the arbitration procedure this week, others accused the Court of Arbitration for Sport of watering down the initial punishment that was, in their opinion, more than justified.

Russia's two-year punishment will more than likely begin this month and run through 2022. You can read more about the ruling in a five-page summary released by the court.