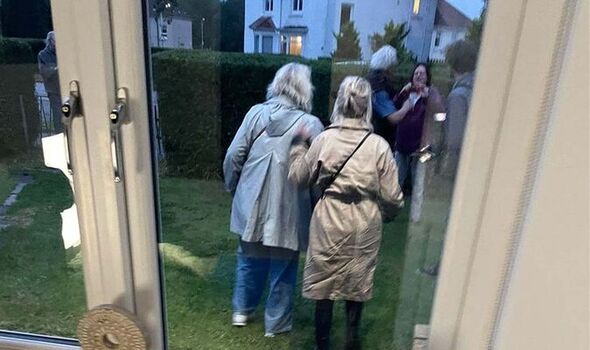 Lanna Tolland was relaxing on her sofa on Wednesday night when she noticed eight people smiling at her from her front gate. The Glaswegian said she was ’so confused’ when she saw the gang walking up her garden path. She also said that the eager but well-meaning intruders approached Lanna’s window and informed her that her home had become somewhat of an unusual tourist attraction.

According to Glasgow Live, Lanna snapped a picture of the group taking a late-night stroll around her garden and shared details of the bizarre encounter on Twitter.

Lanna tweeted: “No way. Lying on the couch with the blind still open and I see eight people I don’t know at the gate waving at me I’m like?? Open the window n they’re all AMERICAN giving it “our great grandparents used to own this house can we have a look around” I thought this only happened on tele.”

She added: “They’re all getting pictures!! Dugs are going mental what is going on.”

“Honestly was so confused man hahahahah,” Lanna came back.

Another said: “I was staying overnight in a house in Manchester once and the next day the doorbell rang. Two Canadian ladies said they wanted to come in as it was where the Bee Gees grew up. They asked where the Blue Plaque was. Had to tell them it was now rented out to a load of students.”

A third wrote: “Happened us on our cottage. His father was born there. A number of years later we dug up a War of independence/civil war era bomb his father had made. The army had to be called to blow it up.”