Dogs are humans’ best friends even before they can speak in full sentences or count.

Young children, even before the age of two, instinctively want to help dogs, a study has found.

As toddlers, they have an early bond with man’s best friend, which makes them pay attention to a pet begging for a toy or treat.

Researchers recruited 97 children, aged 20 months to just over three years old, and put each child in a room with a dog in a play pen. 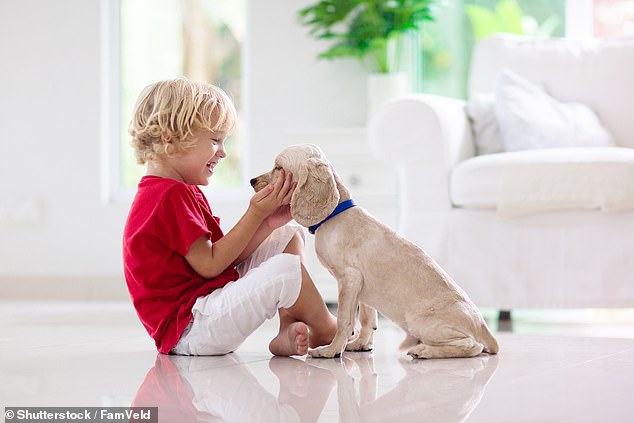 Young children, even before the age of two, instinctively want to help dogs, a study has found (stock image)

When a dog clearly wanted the item (green) children got the dog the item half the time – in 118 out of 236 trials. When dogs were not bothered (white) , children only helped 26 per cent of the time

Pre-school children may be better behaved and kinder if they have a family dog, a study has found.

Experts believe younger children, who spend more time with pets as they are not at school, learn better empathy.

Researchers at the University of Western Australia and Telethon Kids Institute looked at more than 1,600 families with children aged two to five.

Parents filled out a questionnaire which measured children’s antisocial behaviour, problems interacting with others and ‘prosocial’ behaviours such as kindness and sharing.

Children from dog-owning households were 23 per cent less likely to have difficulties with their emotions and social interactions compared to children who did not own a dog.

The experiment aimed to see if the youngsters would pass a dog an item, like a toy or treat, which was beyond their reach.

When a dog clearly wanted the item, for example begging for it, looking back and forth at the object and child, whining or scratching at the play pen, children got the dog the item half the time – in 118 out of 236 trials.

When dogs were not bothered, children only helped 26 per cent of the time.

The results show children are motivated to notice and understand dogs’ desires, and to help them, at around the same age they start doing this for other people.

Dr Rachna Reddy, who led the study from Duke University, said: ‘Previous studies have shown children, even at really young ages, want to behave in ways that are helpful to people.

‘Now we know they have a similar instinct to do this for dogs.

‘We have lived alongside dogs for thousands of years, so we have a special history with them, which may help to explain this.’

Each child met one of the dogs, accompanied by a researcher, while their parent pretended to be distracted by reading a magazine.

The researcher then pretended they had to leave, or do a work task on a computer, and surreptitiously dropped a dog treat or a toy like a rubber bone close to the child and out of reach of the dog, which could see the item through holes in the sides of their play pen enclosure.

The 44 toddlers who had dogs at home were best at helping a dog who clearly wanted an object, by passing it to the animal, or asking their parent or researcher to do so.

Dog-owning toddlers got a dog an item they wanted on 60 per cent of occasions, while children without dogs did so only 40 per cent of the time.

Dog-owning toddlers were also more likely to get toys and treats for dogs which didn’t seem to want them and ignored the objects.

However the authors caution that children who do have dogs may simply be more confident around them, rather than necessarily being more helpful towards them.

Children were more interested in helping the dogs get food than toys, with one child shouting at their parent ‘She’s hungry! She’s hungry! That dog is hungry!’ before the study started.

Humans’ innate desire to understand animals tick could help to explain how our ancestors came up with the idea of domesticating cows and chickens for farming, or working with dogs when hunting.