Scientists have grown ‘mini brains’ from human stem cells containing Neanderthal DNA to help shed light on how such has impacted our development.

Researchers from Germany showed how genetic material derived from our distant Neanderthal cousins can be identified and tracked in the model organs as they grow.

Past studies have shown that around 2 percent of the gene pool of modern humans outside of Africa are composed of Neanderthal DNA.

This genetic heritage was acquired as a result of various episodes of interbreeding between our ancestors and Neanderthals tens of thousands of years ago. 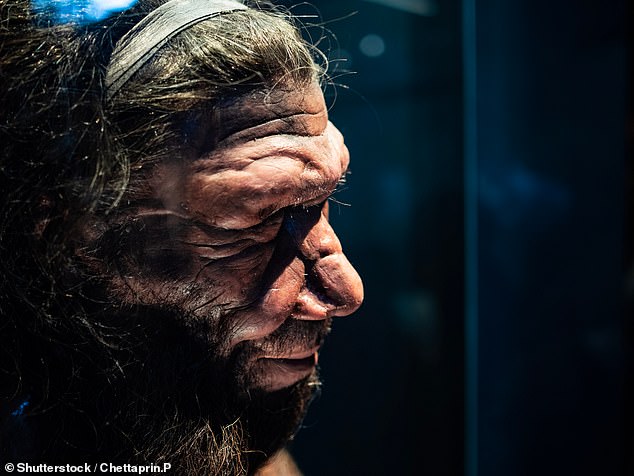 Scientists have grown ‘mini brains’ from human stem cells containing Neanderthal DNA to help shed light on how such has impacted our development. Pictured, a model of a Neanderthal

In their study, geneticist Gray Camp of the Max Planck Institute for Evolutionary Anthropology in Germany and colleagues analysed cell lines taken from the Human Induced Pluripotent Stem Cells Initiative — or, as it is dubbed, ‘HipSci’.

This international resource was established to provide data and cell lines for genetic studies — and nearly all of the latter are derived from individuals of UK and northern European descent, meaning that they contain traces of Neanderthal DNA.

‘Some Neanderthal alleles have [a] relatively high frequency in this population,’ Dr Camp explained. An allele is a variant form of a given gene.

‘Because of that, this induced pluripotent stem cell resource contains certain genes that are homozygous for Neanderthal alleles, including genes associated with skin and hair colour that are highly prevalent in Europeans.’

A homozygous gene is one where both alleles — one inherited from each parent — are the same, meaning that they will be expressed even if they are not dominant.

The researchers set about identifying these traces of genetic material from our ancient relatives — which were acquired as a product of cross-species interbreeding — and predicting which functioning variations of such might also have existed.

They then went on to use five of the cell lines to create so-called ‘organoids’ that resemble brain matter — and studied their cell composition using RNA sequencing.

Finally, the team were able to demonstrate that the data this provided allowed them to track Neanderthal-derived RNA across various development processes.

‘No one has ever been able to look at the role Neanderthal DNA plays during development,’ he said, noting that the present proof-of-principal study had overcome this hurdle — but that there was more work to be done.

‘The real challenge will be scaling up the number of lines in one experiment, but this is already starting to be possible,’ he added. 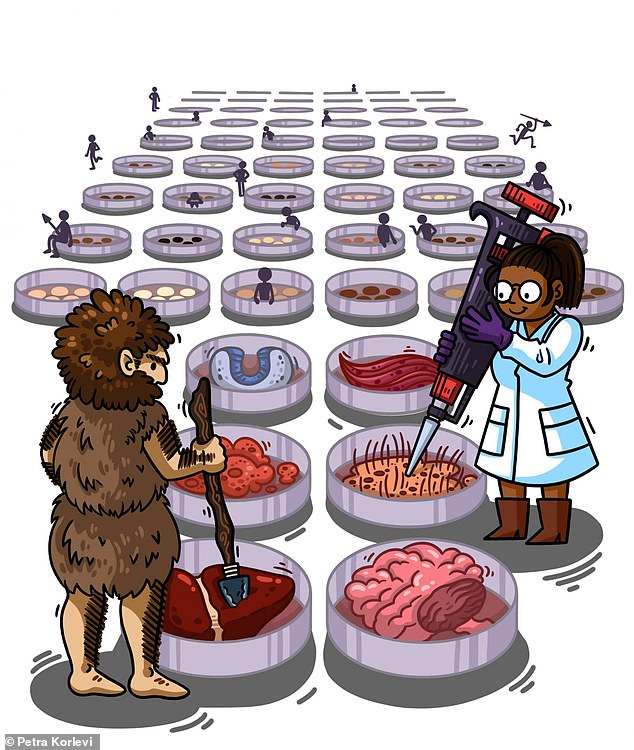 With their initial study complete, the researchers are now looking to further investigate Neanderthal DNA, including how it impacts other areas of the body. ‘Organoids can be used to study a number of different developmental processes and phenotypes controlled by Neanderthal DNA,’ said Dr Camp. These, he added, include the ‘intestinal tract and digestion, cognition and neural function, and the immune response to pathogens’

With their initial study complete, the researchers are now looking to further investigate Neanderthal DNA, including how it impacts other areas of the body.

‘Organoids can be used to study a number of different developmental processes and phenotypes controlled by Neanderthal DNA,’ said Dr Camp.

These, he added, include the ‘intestinal tract and digestion, cognition and neural function, and the immune response to pathogens.’

In addition, Dr Camp explained, the principle behind the research might be similarly employed top investigate other ancient human populations — such as, for example, the Denisovans, whose genes can primarily be found in populations in Oceania.

The full findings of the study were published in the journal Stem Cell Reports.

They were later joined by humans, who entered Eurasia around 48,000 ears ago.