Dino-mite find! Microraptor died 120 million years ago with the FOOT of a small animal lodged in its ribcage – marking the first record of a dinosaur eating a mammal

Paleontologists in the UK have proved that a small feathered flying dinosaur, about the same size as a housecat, ate mammals.

A fossil of the dinosaur, known as Microraptor, was found with the foot of a small mouse-sized creature inside its ribcage.

Scientists, who published their findings in the Journal of Vertebrate Paleontology, said the findings were the ‘first record of a dinosaur eating a mammal’.

Dr David Horne from Queen Mary University of London said: ‘It’s so rare to find examples of food inside dinosaurs, so every example is really important as it gives direct evidence of what they were eating. 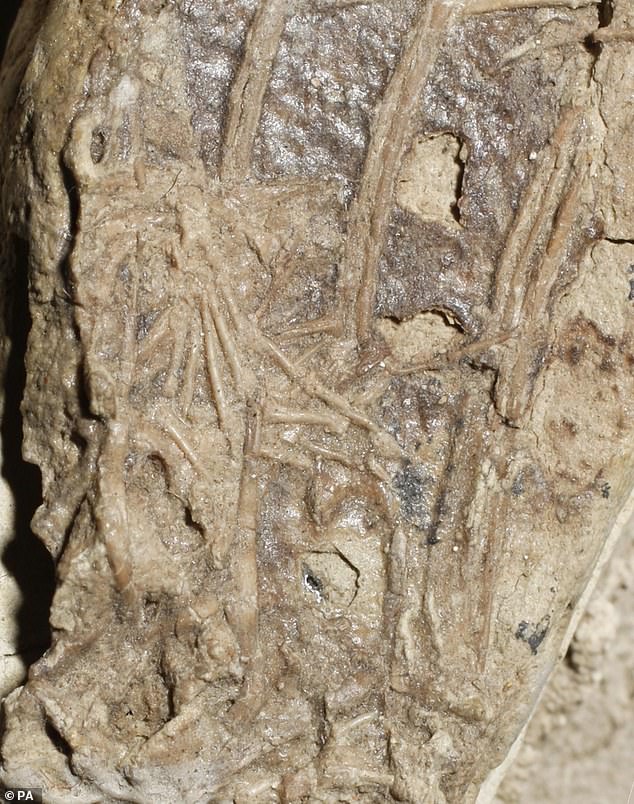 A fossil (pictured) of the dinosaur known as Microraptor was found with the foot of a small mouse-sized creature inside its ribcage. The study by Queen Mary University London believe this is the first known incident of a mammal being eaten by a dinosaur 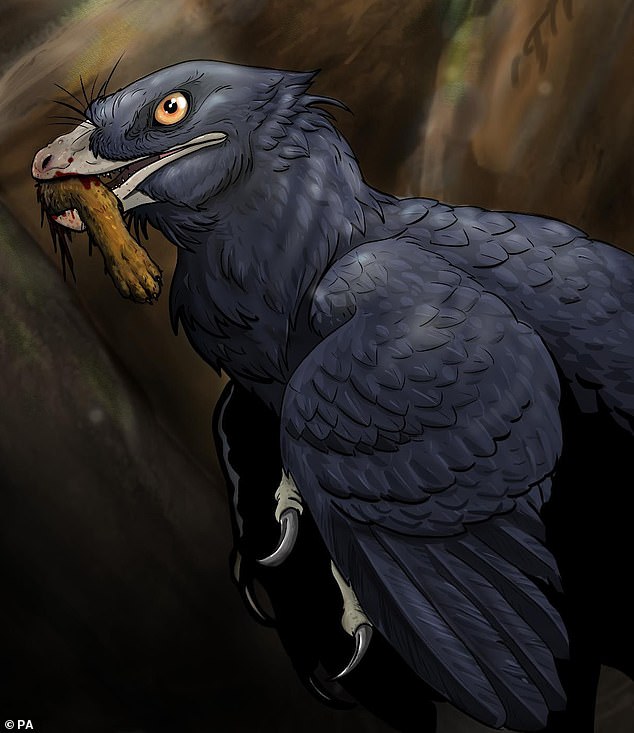 Microraptors were small dinosaurs, around 2.6ft tall, that lived in forests in what is now China, around 120 million years ago

It was given its name for being known as one of the smallest of the raptor species of dinosaur.

It is one of the smallest dinosaurs discovered to date.

The dinosaur had flight feathers on all four of its limbs.

The feathers are believed to be a glossy, iridescent colour.

The Microraptor travelled on two feet but there is also evidence that it was capable of flight.

Some believe the dinosaur launched itself from tree to tree, gliding like a flying squirrel.

‘While this mammal would absolutely not have been a human ancestor, we can look back at some of our ancient relatives being a meal for hungry dinosaurs.

‘This study paints a picture of a fascinating moment in time – the first record of a dinosaur eating a mammal – even if it isn’t quite as frightening as anything in Jurassic Park.’

After discovering the groundbreaking fossil, further analysis suggested the prey lodged in the dinosaur’s ribcage was a mammal about the size of a mouse.

First discovered in 2000, microraptors – meaning ‘small thief’ in Greek – lived somewhere between 113 and 125 million years ago, in ancient forests of what is now China.

Weighing around 2.2lbs (1kg) with a length of 2.6ft (0.8m), experts believe it may have been capable of guided flight.

Fitted out with long flight feathers on each of its four limbs, paleontologists previously questioned whether these weathers were to aid flight or attract mates.

Early records of a iridescent feather colours led researchers to believe the dinosaurs used their shiny wings as a way of demonstrating sexual prowess.

Evidence suggests the animal would have likely lived on the ground and not be a good climber.

Prior to this study, research into the feathered dinosaur showed that they ate creatures such as birds, lizards and fish. 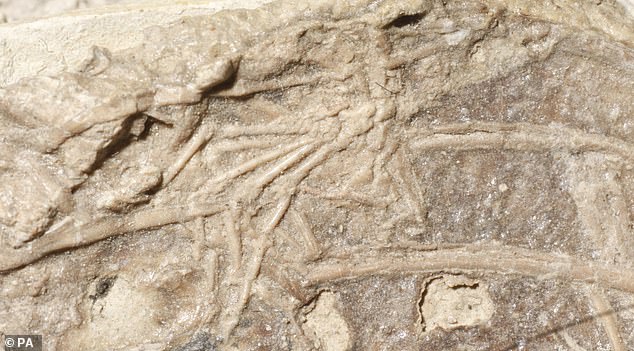 A closer image of the foot found within the ribcage of a Microraptor. First discovered in 2000, Microraptors, which means ‘small thief’ in Greek, lived somewhere between 113 and 125 million years ago, in ancient forests in what is now China 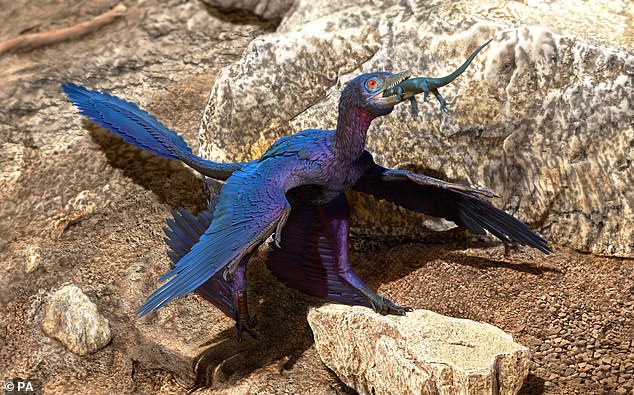 In 2019, paleontologists found a never-seen-before species of lizard inside the fossilized stomach of a Microraptor. Pictured: Illustration of a microraptor swallowing a lizzar

What still remains a mystery, however, is whether the species consumed by the Microraptor was found dead and then scavenged, or whether the dinosaur preyed on them.

Previous researchers have also indicated the dinosaur could have been an opportunistic predator.

Dr Alex Dececchi, from Mount Marty College in South Dakota, US, and one of the study authors, said: ‘The great thing is that – like your housecat, which was about the same size – Microraptor would have been an easy animal to live with but a terror if it got out, as it would hunt everything from the birds at your feeder to the mice in your hedge or the fish in your pond.’

In 2019, paleontologists found a never-seen-before species of lizard inside the fossilized stomach of a Microraptor.

This was the fourth documented case of a Microraptor preserving what it had eaten in its stomach.

If you liked this article …

The world’s smallest dinosaur: 110 million-year-old footprints found in South Korea belong to a sparrow-sized raptor that could fit in the palm of your hand

Which dinosaurs lived near YOUR home town? MailOnline map shows where Iguanodon, Baryonyx, megalosaurus and others used to roam Britain up to 252 million years ago