Spaceport Cornwall gets the green light for lift off! Virgin Orbit secures licence to launch its 70ft-long LauncherOne rocket in the ‘coming weeks’ – marking the first EVER orbital mission from UK soil

Virgin Orbit has finally been awarded all the licences required to operate the UK’s first space launch.

It is planning a launch from Spaceport Cornwall at Cornwall Airport Newquay in the coming weeks, after the launch window opened on December 14.

The mission, named ‘Start Me Up’ in tribute to rock band The Rolling Stones, will involve a repurposed Virgin Atlantic Boeing 747 aircraft and Virgin Orbit’s LauncherOne rocket. 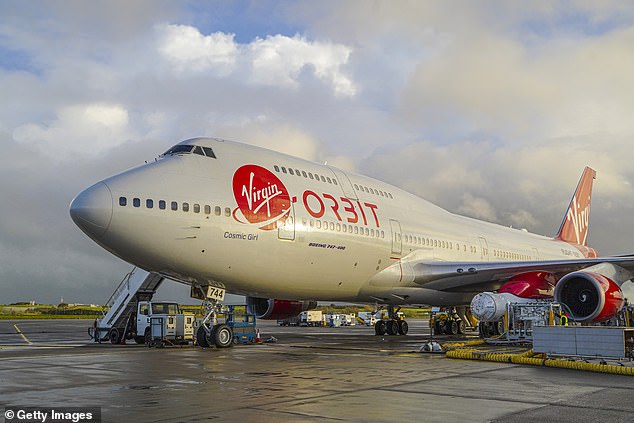 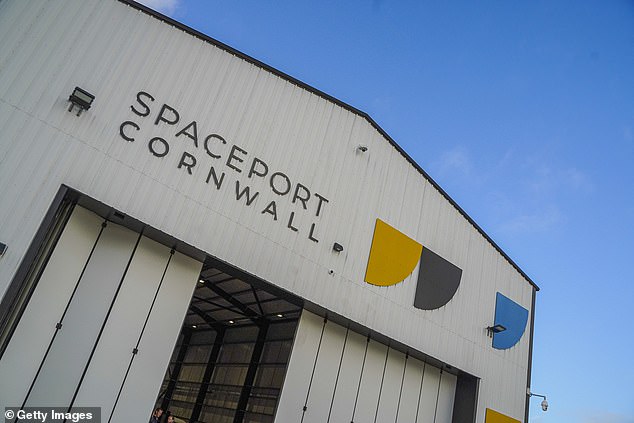 Virgin Orbit is planning a launch from Spaceport Cornwall at Cornwall Airport Newquay in the coming weeks, after the launch window opened on December 14

Spaceport Cornwall is a new UK spaceport just outside of Newquay, officially opened in September 2022.

Spaceport Cornwall is located at Cornwall Airport Newquay, an active civilian airport with passenger flights around the UK and Europe.

It will be one of the only places in the world where you can be on a passenger airplane and look out your window to see a launch to space about to happen.

The first launch from the port, operated by Virgin Orbit, is now scheduled for December 14.

The 747, named ‘Cosmic Girl’, will take off horizontally from Spaceport Cornwall while carrying the 70-foot-long rocket in its belly.

LauncherOne was made at the Virgin Orbit base in Long Beach in Los Angeles County, and arrived in the UK in October.

The two-stage orbital launch vehicle will be dropped at 35,000ft (11,000 m) over the Atlantic Ocean to the south of Ireland.

It will then engage its thrusters to launch itself into space at up to 17,500 mph (28,000 kph), where it will deposit the satellites, while the plane returns to the spaceport.

The satellites have a variety of civil and defence applications, and will be the first to be launched into space from Europe.

Satellites produced in the UK have previously needed to be sent to foreign spaceports to get them into space.

CAA director for space regulation Tim Johnson said: ‘This is another major milestone in enabling the very first orbital space launch from UK shores, and these licences will assist Virgin Orbit with their final preparations for launch.

‘Effective licensing forms an integral part of UK space activity, and with public safety at the heart of our decision making we’ve worked with Virgin Orbit to assess their applications and issue licences within our expected timelines.’

‘This is a major milestone for the CAA and represents the successful completion of an enormous effort, which has included the construction of new regulations, new processes and new teams.

‘With our partners at the UK Civil Aviation Authority, Spaceport Cornwall, UK Space Agency and our payload customers, together we are progressing towards the first launch from Cornwall – keeping a strong focus on a safe and successful mission for all.’ 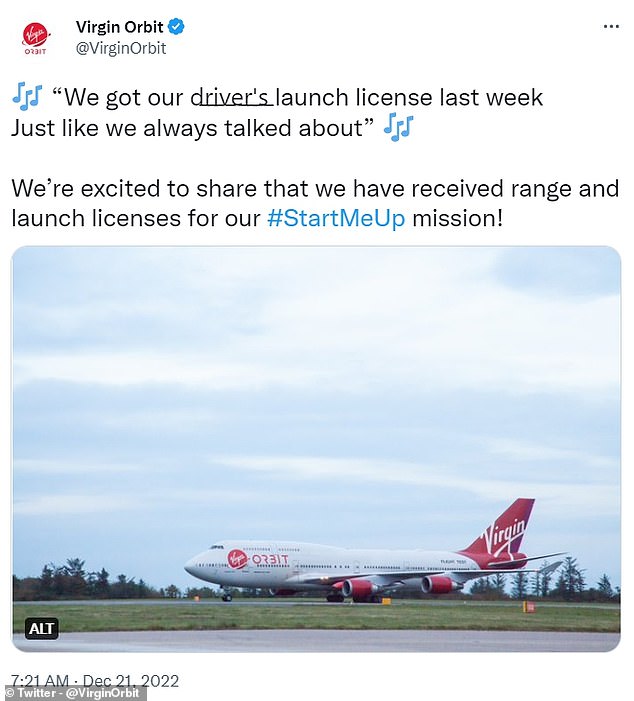 This morning, Virgin Orbit confirmed in a Tweet that it had also received the range license, with a reference to Olivia Rodrigo’s hit ‘driver’s license’ 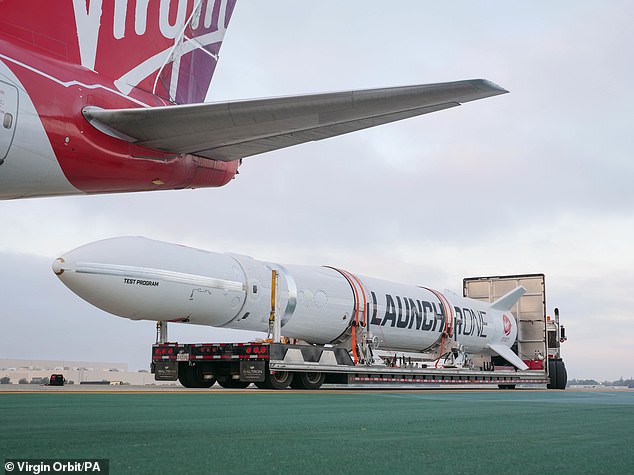 Cosmic Girl will be used to carry a rocket, named LauncherOne (pictured), under one of its wings that will detach once airborne and journey on into the Earth’s low orbit where it will release a number of small satellites 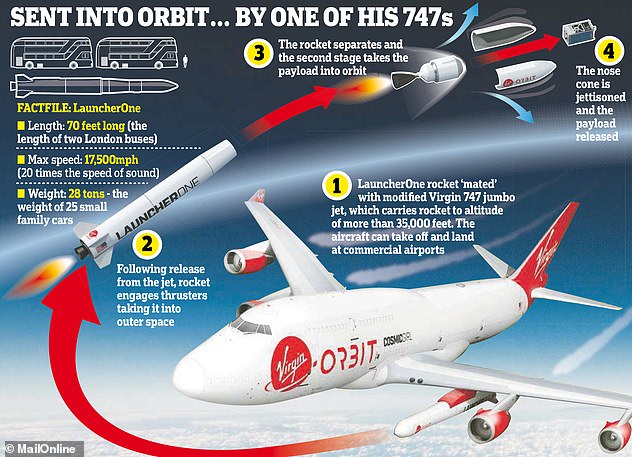 The mission, named ‘Start Me Up’ in tribute to rock band The Rolling Stones, will involve a repurposed Virgin Atlantic Boeing 747 aircraft and Virgin Orbit’s LauncherOne rocket

Transport Secretary, Mark Harper, said: ‘Today we are one step closer to opening the UK’s galactic gateway, with Virgin Orbit receiving an historic first licence to allow the UK’s first ever spaceflight launch.

‘The planned launch reinforces our position as a leading space nation as we look to the future of spaceflight, which can spur growth and innovation across the sector, as well as creating thousands of jobs and apprenticeships.’

Spaceport Cornwall was awarded an operators licence by the CAA last month, meaning the site is licensed for launch operations.

However, Virgin Orbit, as the operator, needed both launch and range licenses from the CAA before the historic launch could happen.

This morning, the company confirmed in a tweet that it had also received the range license, with a reference to Olivia Rodrigo’s hit ‘driver’s license’.

Spaceport Cornwall told MailOnline that December 14 is when the window opened for the first launch attempt, although a definitive date has not been announced yet. 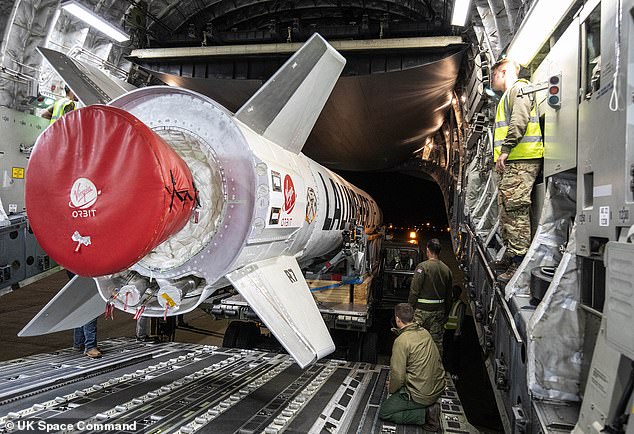 In October, the LauncherOne rocket arrived at the spaceport , after being transported from California aboard a military plane 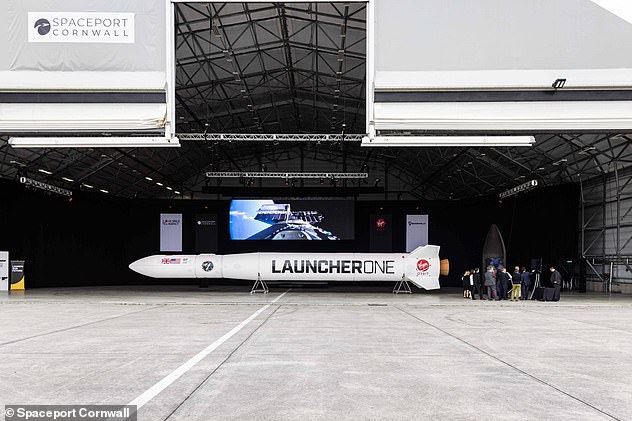 The two-stage orbital launch vehicle, LauncherOne, will be dropped at 35,000ft (11,000 m) over the Atlantic Ocean to the south of Ireland 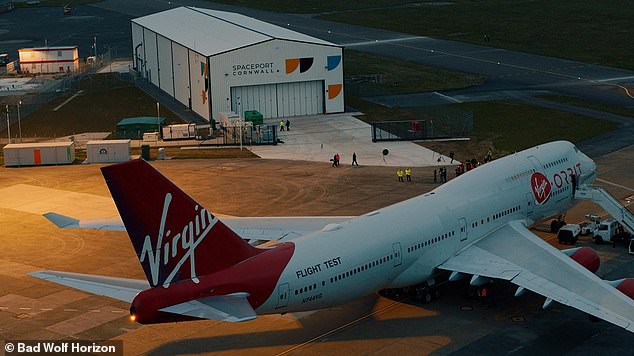 Cosmic Girl is named after a hit singles by British funk band Jamiroquai. Virgin Orbit names its missions and vehicles after songs in a nod to its association with Virgin Records

LauncherOne will catapult its onboard satellites into space at 8,000 miles per hour while in low Earth orbit.

These include the UK government’s two ‘cubesats’ – measuring about 12 inches long, 8 inches wide and 4 inches deep – along with eight other payloads as part of a mission named Prometheus-2.

‘Cubesat 1’ and ‘Cubesat 2’ will provide a test platform for monitoring radio signals including GPS and sophisticated imaging.

Cubesat 1 includes a laser detector, a GPS receiver and a hyperspectral imager – which can capture multiple slivers of pictures over different wavelengths of light.

The cubesats will allow the Ministry of Defence to better understand how the UK and its international partners can work together to create a ‘more capable and flexible system’ at a lower cost.

As well as being the first satellite launch from Britain, ‘Start Me Up’ will also be the first commercial launch from Europe and the first international launch by Virgin Orbit.

It will be a momentous occasion, with the UK finally joining the space race some 70 years after the British Space Programme was established in 1952.

Getting the infrastructure and regulations in place to allow for liftoff from Newquay has taken considerable time.

But, while the airport and its 1.6 mile-long (2.7km) runway look the same, a new building will allow Virgin Orbit to load satellites into its rocket and then attach it to the wing of its plane.

An on-site mission control will also be used to carry out the launch. 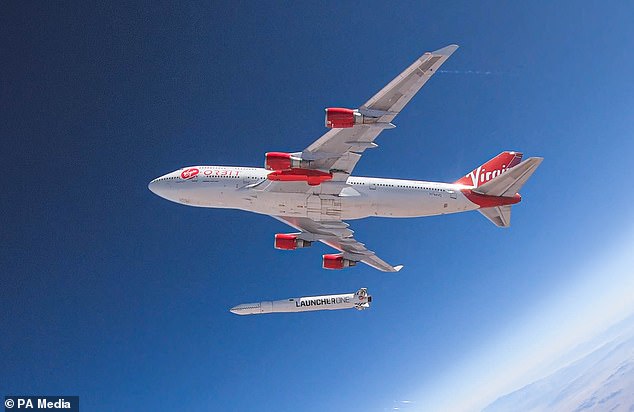 Spaceport Cornwall has told MailOnline that December 14 is when the window opened for the first launch attempt, although a definitive date has not been announced yet 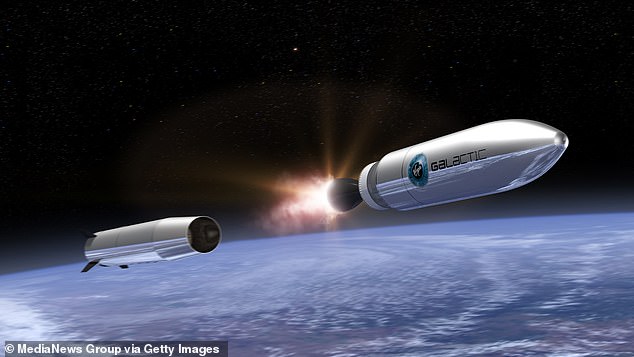 LauncherOne will catapult its onboard satellites into space at 8,000 miles per hour

Spaceport Cornwall is one of seven spaceports being developed across Britain.

The first vertical space launch is expected to take place next year from the planned SaxaVord Spaceport on Unst in Shetland.

A public consultation on the environmental effects of the spaceport was launched by the CAA last month.

The locations for four other proposed spaceports in Scotland are: the A’ Mhoine peninsula in Sutherland; Prestwick in South Ayrshire; Campbeltown in Argyll and Bute and North Uist in the Outer Hebrides.

Another spaceport has been planned at Llanbedr, Gwynedd, in North Wales.

The Government hopes commercial space launches will be worth £3.8 billion to the UK economy over the next decade.

Watch disabled ‘astronauts-in-training’ complete a zero-gravity flight 25,000ft above Earth to increase understanding of how space travel can be made more accessible.

SpaceX also quietly launched two FIFA official match footballs into SPACE on board a Falcon 9 rocket ahead of Qatar 2022.

And, NASA has shared stunning photos showing the Orion capsule bobbing in the Pacific Ocean after it splashed back down to Earth.

1975: 10 nations including the UK founds the European Space Agency

2022: Three UK spaceports – one in Cornwall and two in Scotland – are expected to become operational