The discovery of at least two rocky ‘super-Earths’ orbiting a nearby dwarf star could provide vital clues in the search for extra-terrestrials, astronomers say.

While the worlds are unlikely to be habitable for life as we know it, the star and its exoplanets are among the closest multi-world systems to Earth, at just 33 light-years away.

This makes the system an excellent target for further investigation, in part because it could contain more planets, including the potential for one in the habitable zone.

‘There are many multi-planet systems hosting five or six planets, especially around small stars like this one,’ said astrophysicist Avi Shporer, of MIT’s Kavli Institute for Astrophysics and Space Research.

‘Hopefully we will find more, and one might be in the habitable zone. That’s optimistic thinking.’ 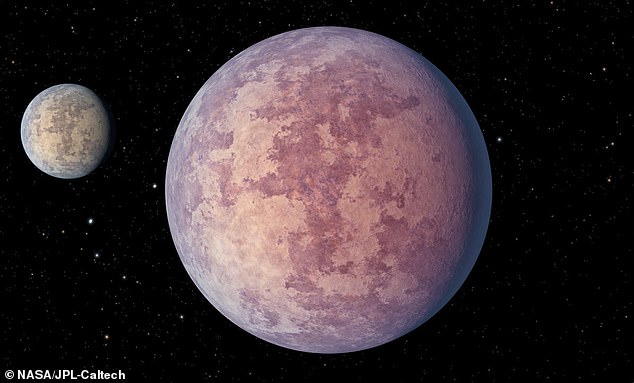 The discovery of at least two rocky ‘super-Earths’ (pictured in an artist’s impression) orbiting a nearby dwarf star could provide vital clues in the search for extra-terrestrials, astronomers say

KEY FACTS ABOUT THE NEWLY-DISCOVERED ‘SUPER-EARTHS’

Size: About 1.2 times as big as Earth

Mass: Twice as massive and slightly denser than Earth

Size: About 1.5 times as big as Earth

Mass: About three Earth masses but a bit less dense

Even though the star HD 260655 is cooler and dimmer than our sun, the proximity of the planets to the red dwarf means the worlds would be way too hot for life.

‘We consider that range outside the habitable zone, too hot for liquid water to exist on the surface,’ said astronomer Michelle Kunimoto, of MIT’s Kavli Institute for Astrophysics and Space Research.

Nevertheless, scientists are excited about this system because the proximity and brightness of its star will give them a closer look at the properties of the planets and signs of any atmosphere they might hold.

‘Both planets in this system are each considered among the best targets for atmospheric study because of the brightness of their star,’ said Kunimoto.

‘Is there a volatile-rich atmosphere around these planets? And are there signs of water or carbon-based species? These planets are fantastic test beds for those explorations.’

The new planetary system was initially identified by NASA’s Transiting Exoplanet Survey Satellite (TESS), an MIT-led mission that is designed to observe the nearest and brightest stars, and detect periodic dips in light that could signal a passing planet.

In October 2021, Kunimoto, a member of MIT’s TESS science team, was monitoring the satellite’s incoming data when she noticed a pair of periodic dips in starlight, or transits, from the star HD 260655.

She ran the detections through the mission’s science inspection pipeline, and the signals were soon classified as two TESS Objects of Interest, or TOIs — objects that are flagged as potential planets.

The process of classifying and subsequently confirming new planets can often take several years, but for HD 260655 that process was shortened significantly with the help of archival data.

Soon after Kunimoto identified the two potential planets around HD 260655, Shporer looked to see whether the star was observed previously by other telescopes.

As luck would have it, HD 260655 was listed in a survey of stars taken by the High Resolution Echelle Spectrometer (HIRES), an instrument that operates as part of the Keck Observatory in Hawaii.

HIRES had been monitoring the star, along with a host of other stars, since 1998, and the researchers were able to access the survey’s publicly available data.

In the end, this collaborative effort quickly confirmed the presence of two planets around HD 260655 in about six months.

The team then looked more closely at TESS data to pin down properties of both planets, including their orbital period and size.

They determined that the inner planet, dubbed HD 260655b, orbits the star every 2.8 days and is about 1.2 times as big as the Earth.

From the archival data, researchers were then able to calculate the planets’ mass and density.

They found the inner planet is about twice as massive and slightly denser than Earth, while the outer planet is about three Earth masses but a bit less dense. Both planets, based on their density, are likely terrestrial, or rocky in composition, the astronomers said.

So far, more than 5,000 exoplanets have been confirmed in our Milky Way galaxy, with experts especially interested in finding terrestrial, or rocky, worlds like Earth, Venus, and Mars.

The researchers presented their findings at the 240th meeting of the American Astronomical Society.

NASA’s ‘planet hunter,’ spacecraft, is equipped with four cameras that will allow it to view 85 per cent of the entire sky, as it searches exoplanets orbiting stars less than 300 light-years away.

In its first year of operation, it mapped the 13 sectors that make up the southern sky, and scoured the northern sectors the following year.

Since it was launched in 2018, TESS has found over 170 confirmed exoplanets, and has a catalogue of over 4,700 yet to be verified.

It has also discovered other strange phenomena including supernova and triple star systems since it was launched.