The UK Government says it is widening the search for a home-grown solution to the country’s need for an independent satellite-navigation and timing system.

Ministers had asked industry to spec what amounted to a copy of the EU’s Galileo network, now that Britain is no longer a member of the European bloc.

Industry’s report – which includes costings – is about to be delivered.

But the government says it wants also to consider other solutions than just a “me too” system.

The satellites that Galileo uses to transmit precise positioning, navigation and timing (PNT) signals are in a Medium-Earth Orbit (MEO), 23,000km above the Earth. The alternatives the government says it will now investigate could use spacecraft that are much lower in the sky, just a few hundred km up, or indeed much higher, in the geostationary (GEO) arc some 36,000km in altitude.

Sat-nav systems have become fundamental to the functioning of society in the last few decades.

The uses for the signals beamed from space go far beyond just finding one’s way through an unfamiliar city with an enabled smartphone.

Their timing functions have become ubiquitous in many fields, including in the synchronisation of global financial transactions, telecommunications and energy networks.

And because the UK is no longer involved with Galileo, ministers say the procurement of a dependable sovereign system is therefore now critical to the national interest.

There has been much speculation in recent months about the role the Low-Earth Orbiting (LEO) OneWeb telecommunications constellation could possibly play in any future UK sat-nav strategy. The government took a share in the company in July to buy it out of bankruptcy, but its spacecraft are designed to deliver broadband services, not do PNT – at least, not in their current configuration.

Newspaper reports in recent days have also suggested ministers are ready to give up on a Galileo-like option for Britain’s sovereign sat-nav system, but spokespeople for both the Department for Business, Energy and Industrial Strategy (BEIS) and the UK Space Agency (UKSA) were adamant that was not the case.

Thursday’s announcement, they told BBC News, was simply a call to review all the ideas that were out there. 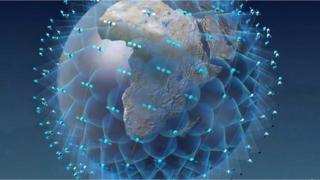 The UKSA has so far spent just over £45m, from an available £92m pot, examining the concept of a British MEO sat-nav system, in what’s been called the UK’s Global Navigation Satellite System (UK GNSS) programme.

Industry has detailed what the spacecraft would look like, the components they would use, and how they would be controlled from the ground.

Key considerations have included how the radio frequencies to be used by the system to transmit PNT signals would not interfere with the networks of other countries, such as the Global Positioning System (GPS) run by the Americans.

The UK GNSS programme ends this month, with its findings expected to be sent to the space agency soon after. The report will include some ball-park costings for a British MEO system, which are expected to be in the region of £3-5bn. This is just the price of setting up the infrastructure; any system needs ongoing funding to manage it and to replace ageing assets.

The widened search to include possible alternatives to a MEO network is being called the Space-Based Positioning Navigation and Timing Programme (SBPP).

The UKSA says it will be using funds unspent from its £92m pot to investigate further the best, most innovative ideas that come forward.

There are some interesting technologies and approaches emerging that could be placed on low-orbiting satellites to deliver PNT signals, perhaps even on future generations of the OneWeb constellation.

These include chip-scale atomic clocks (CSACs) – devices that are a fraction of the size and weight of the traditional clocks current sat-nav spacecraft use to generate their PNT signals.

It’s also clear that the space and defence consortia now bidding to run Britain’s military satellite telecommunications service, Skynet, are likely to fold some sort of sat-nav offering into their proposals.

This could include a mix of satellites in LEO, MEO and GEO, to provide initially a regional service over the UK before being extended to cover other areas of the globe where there are British interests.

Whatever type of system ministers eventually choose, there’s a view in industry that the decision needs to be made soon.

Expertise in sat-nav technologies, built up over many years working on the EU’s Galileo network, will simply bleed away in the absence of a British sovereign alternative.

“The government needs to decide precisely what it wants – whether it’s a military capability, a civil capability, or both – and then get on with it,” one industry official told BBC News.