Cuvier’s beaked whales are known for their abilities to dive deep and they average around an hour under water.

But researchers were astounded when they recorded one animal diving for three hours and 42 minutes.

They believe that it is the longest dive yet recorded for any whale and almost certainly a record for all mammals as well.

Beaked whale species are a bit of mystery to scientists, spending much of their time far from shore.

The Cuvier’s beaked whale has a stout body, a small sloping head and short beak. Males appear to have two teeth which they use for fighting, females don’t seem to have any. 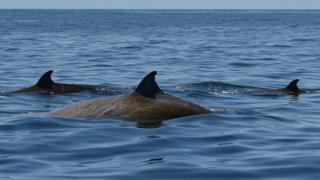 They normally hunt squid for food, usually sucking the creatures into their mouths to eat them.

Scientists say that in pursuing their favourite food, these whales have been documented diving down to around 3,000m.

When they surface they spend about two minutes before diving again, meaning it is very difficult for researchers to observe and tag them.

In 2014, one whale was recorded diving for just over two hours, the longest known time underwater.

In this latest study, researchers recorded more than 3,600 dives by two dozen Cuvier’s beaked whales over a five-year period.

They recorded dives lasting from around half an hour to two hours thirteen minutes, well past the point at which an animal of this size should run out of oxygen.

But two dives by one individual whale “astounded” the research team.

“The longest dive for the species was about two and a half hours, so this is the longest for Cuvier’s beaked whales, but it’s also the longest for any mammal,” Dr Nicola Quick, from Duke University in Durham, US, told BBC News.

While this one individual was recorded completing these extremely long dives, Dr Quick says her study showed that a large percentage of the animals observed were capable of going under for very long periods.

The researchers speculate that the whales might have an extremely slow metabolism, perhaps coupled with larger than average oxygen stores, and an ability to tolerate the build up of lactic acid.

“Their body muscles are sort of built differently, from what you maybe would expect from a deep diver,” said Dr Quick.

“They have sort of smaller brains, and quite a small lung volume. And they have a lot of good muscle tissues that are great for holding oxygen stores, which probably helps them to increase their dive durations.”

Fear may also have played a part in the record dive.

This species is vulnerable to killer whales and larger sharks. The whales react to threats by staying underwater as long as possible, until the predators move away.

And the deep dive may also have been in response to humans. The record took place some 24 days after exposure to a US Navy active sonar signal, and the researchers excluded them from their data set, as they could potentially have been impacted by the noise.

Cuvier’s beaked whales are known to be sensitive to sonar and other experts believe that this may have had an impact on the dive length.

“The recorded dive time of more than three hours is likely not typical, and instead the result of an individual pushed to its absolute limits,” said Nicola Hodgkins from Whale and Dolphin Conservation, who was not involved with the study.

“Only one whale, thought to already be compromised as a result of being exposed to extremely high levels of noise from military sonar, and therefore showing abnormal behaviour, was recorded undertaking such extreme dives.”

The research team found that there was little relationship between the length of dive and the recovery time needed by the whales before going down once again.

The scientists believe that studying these deep diving animals could offer some clues to challenging questions such as cancer in humans.

“There’s some interest in working with colleagues in oncology in Duke University, and even with Covid, as that involves cells losing oxygen or being in hypoxic conditions,” said Dr Quick.

“So if these whales are in these hypoxic conditions in their tissues, and if we can find out what they were doing, then could that have some other implication for human health or just ocean health in general?”

The study has been published in the Journal of Experimental Biology.