A species of jellyfish that has invaded European waters eats its own offspring when food is low, researchers claim.

The cannibalistic animal is a species called Mnemiopsis leidyi, which is also known as the warty comb jelly.

It regularly washes up on Baltic shores and researchers now believe it eats its own larvae when food is scarce. 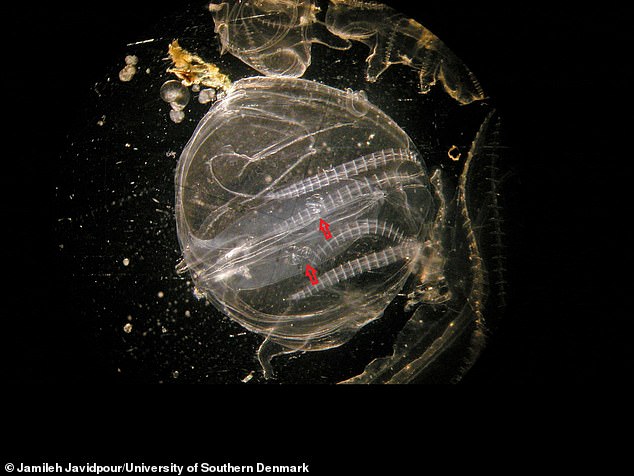 Pictured, evidence of cannibalistic behaviour. Here an adult Mnemiopsis leidyi is seen with larvae (next to red arrows) inside it.

Researchers from the University of Southern Denmark say this discovery shows how cannibalism is prevalent across the animal kingdom.

The jellyfish, which has wreaked havoc on local environments, is known to be able to survive significant hardship, but exactly how it coped was a mystery.

However, researchers previously assumed it was due to a lack of predators in its native environment.

The creature is native to western Atlantic but was introduced to Eurasian waters in the 1980s and has flourished since.

They compete with native fish and severely affect food webs, having a knock-on impact on commercial fisheries.

To understand why the numbers of these jellyfish soar even in times of hardship, a team of researchers from the University of Southern Denmark and the Max Planck Institute for the Science of Human History studied a population living in the Baltic Sea off of northern Germany.

Lead author Jamileh Javidpour, an assistant professor at the University of Southern Denmark, said: ‘We combined a study of the population dynamics of this species with experimental feeding and geochemical tracers to show, for the first time, that adult jellies were actually consuming the blooms of their own offspring’.

They found that when the main prey of the jellyfish, a water bug called a copepod, collapsed, the numbers of adult jellyfish remained unchanged.

Normally, when the prey disappears from the food chain, the number of predators collapses as there is not enough food to go around. 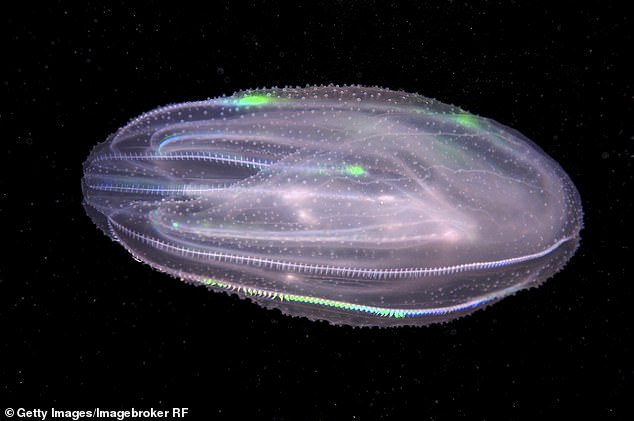 What the researchers did observe however, was a drastic reduction in the amount of jellyfish larvae.

To find out whether the adults ate the larvae, the researchers studied comb jellies in the lab. It was there that the marine infanticide was observed.

Thomas Larsen, co-author of the study at the Max Planck Institute for the Science of Human History, said: ‘In some ways, the whole jelly population is acting as a single organism, with the younger groups supporting the adults through times of nutrient stress.

‘Overall, it enables jellies to persist through extreme events and low food periods, colonising further than climate systems and other conditions would usually allow.’

The data may help to allow conservationists to better combat the spread of these jellies which can disadvantage native species.

Cannibalism has been recorded among over 1,500 species, including humans, chimpanzees, squirrels, fish, and dragonfly larvae.

Professor Javidpour added: ‘Because comb jellies trace their ancestry back to the beginning of most animal life as we know it during the Cambrian Period, 525 million years ago, it remains possible that it is a basic, unifying feature across the animal kingdom.’

The findings were published in the journal Communications Biology.