The first completely automated cashier-less store opened in the Middle East on Monday, as French retail giant Carrefour rolled out its vision for the future of the industry in Dubai’s cavernous Mall of the Emirates.

Like the unmanned Amazon Go stores that opened in Seattle in 2018, the Carrefour mini-market looks like any ordinary convenience store, brimming with sodas and snacks.

However, only shoppers with the store’s smartphone app may enter, and there’s no checkout lines or registers.

A sophisticated system of shelf sensors and nearly 100 small surveillance cameras tracks customers’ movements as they fill their carts.

Five minutes after shoppers leave, their phones ping with receipts for whatever they put in their bags.

‘This is how the future will look,’ Hani Weiss, CEO of retail at Majid Al Futtaim, the franchise that operates Carrefour in the Middle East, told the Associated Press.

‘We do believe in physical stores in the future. However, we believe the experience will change.’

The ninth-largest retailer in the world by revenue, according to Forbes, Carrefour is still Europe’s biggest supermarket chain by number of stores.

Globally, it took in $101 billion in 2020 from some 12,225 stores in over 30 countries, including 44 supermarkets and 55 warehouse-like hypermarkets in the United Arab Emirates. 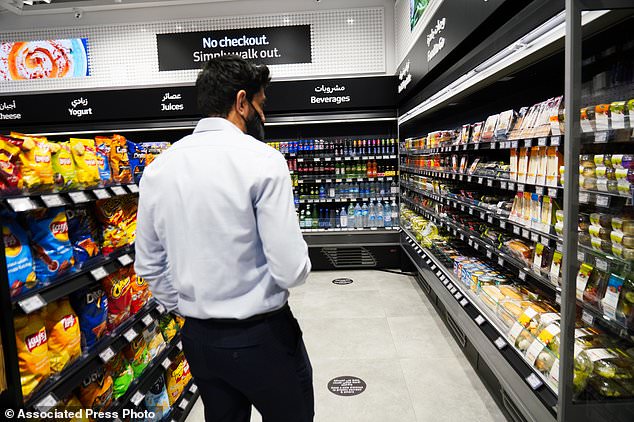 On Monday, the first cashier-less automated store opened in the Middle East, as retail giant Carrefour opened the doors at Carrefour City+ in Dubai’s cavernous Mall of the Emirates

The prototype shop, Carrefour City+, is the latest addition to the burgeoning field of retail automation.

Major retailers worldwide are combining machine learning software and artificial intelligence in a push to cut labor costs, do away with the irritation of long lines and gather critical data about shopping behavior.

‘We use [the data] to provide a better experience in the future … whereby customers don’t have to think about the next products they want,’ Weiss said.

‘All the insights are being utilized internally in order to provide a better shopping experience.’

Customers must give Carrefour permission to collect their information, Weiss added, which the company promises not to share. But the idea of a vast retail seller collecting reams of data about shoppers’ habits already has raised privacy concerns in the United States, where Amazon now operates several such futuristic stores, known as Amazon Go.

It’s less likely to become a public debate in the more autocratic United Arab Emirates, home to one of the world’s highest per capita concentrations of surveillance cameras.

With the pandemic forcing major retailers to reassess the future, many are increasingly investing in automation, a vision that portends severe job losses across the industry.

But Carrefour stressed that human workers, at least in the short-term, would still be needed to ‘support customers’ and assist the machines.

‘There is no future without humans,’ Weiss said. 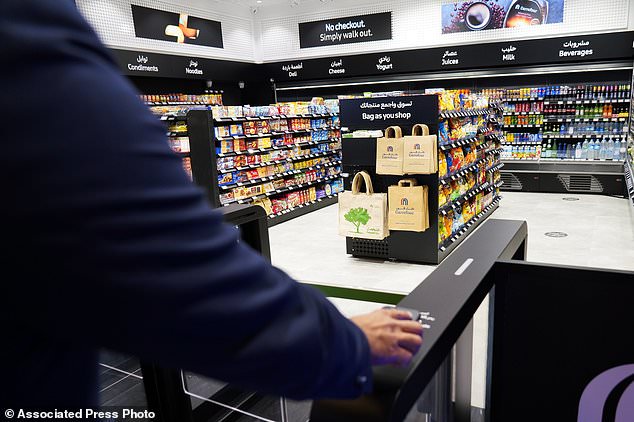 Customers need to upload the Carrefour app to enter the store, where shelf sensors and surveillance cameras track what they put in their basket. There’s no formal checkout experience, as shoppers simple receive a receipt for their purchases several minutes after leaving the store

The checkout-free Carrefour City+ is the next step in the French company’s move toward automated shopping: Careefour launched an unmanned store in Taiwan, called iCarrefour, in January 2020.

The 100-square-foot mart in Tapei carries about 600 snacks and sundries aimed at workers in the office building above its storefront.

Unlike the Dubai shop, the Tapei shop still requires shoppers to scan barcodes and use a self-checkout machine that takes digital payments.

When customers are ready to go, payment is made in-app using a credit or debit card, and the customer re-scans their QR code to exit.

Carrefour opened similar stores in Brazil in March 2021 — one in a co-working hub in Sao Paolo’s posh Brooklin neighborhood and another on the ground floor of a residential high-rise in São Bernardo do Campo.

Carrefour Brazil already uses scan-and-go technology in 40 other locations but these were the first unstaffed shops. 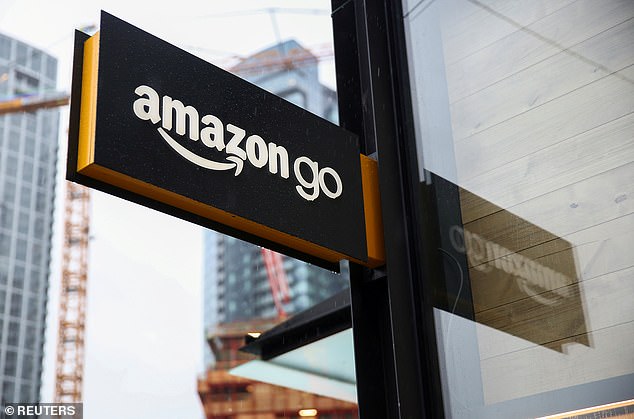 Amazon pioneered cashier-less retail with automated Amazon Go stores in Seattle in 2018. The company has confirmed it is selling the technology to other companies but declined to name any

Amazon confirmed in March 2020 that it was selling its cashier-less technology to other retailers, having signed several signed deals with partners it declined to name.

It’s not clear if Carrefour was one such customer—the company did not respond to DailyMail.com’s request for comment.

In February 2020, Dilip Kumar, Amazon’s vice president of physical retail and technology, told Reuters the tech has ‘pretty broad applicability across store sizes, across industries, because it fundamentally tackles a problem of how do you get convenience in physical locations, especially when people are hard-pressed for time,’

Kumar declined to comment on the service’s business model or pricing, saying, ‘a lot of those are bespoke deals.’

In addition to expanding the services offered by Amazon, it would also increase reliance on Amazon Web Services, the company’s cloud that underpins its checkout-free systems.

Kumar said Amazon ‘potentially’ could sell the service to retail rivals but would not speculate.