Cockroaches are CANNIBALS: Insects nibble on each other’s wings after they have mated in unusual case of sexual cannibalism, study reveals

A species of cockroach nibbles a little bit of its partner’s wings after mating, a new study reveals.

This ‘mutual’ behaviour is highly unusual and differs from the more common case of sexual cannibalism in insects, where the dominant female kills and eats the male after mating.

Nibbling on each other’s wings may help keep them trim and ‘reduce maintenance costs’ of flight, the researchers suggest. 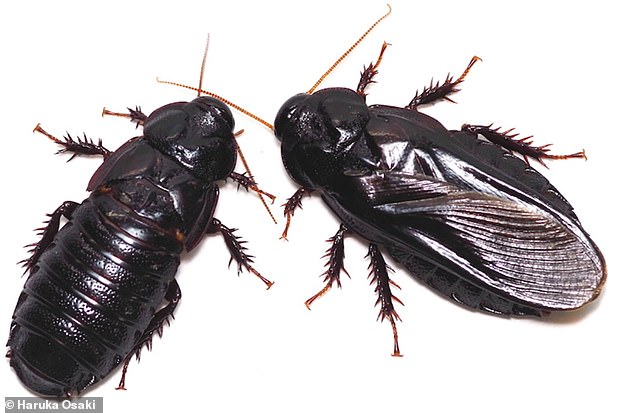 Adults of Salganea taiwanensis before (right) and after (left) mutual wing‐eating behaviour. The right individual has long intact wings. The left individual has short wings. Most part of its wings has been eaten by its mate

This may in some way let them invest further in reproduction or care for offspring.

The behaviour could also act as hygiene management against mites or mould, which were observed on their wings in the laboratory.

‘Within mating pairs of a wood‐feeding cockroach, males and females eat the mate’s wings each other, which is the first “mutual” case in these behaviours,’ say Haruka Osaki and Eiiti Kasuya from Kyushu University’s Department of Biology.

‘Mutual wing‐eating may be an example of true cooperation and may help explain some interactions between females and males from a new viewpoint.

‘If the wing eating increases the ability of the mate to raise the offspring, this behaviour is adaptive for the eater as well as its mate.’ 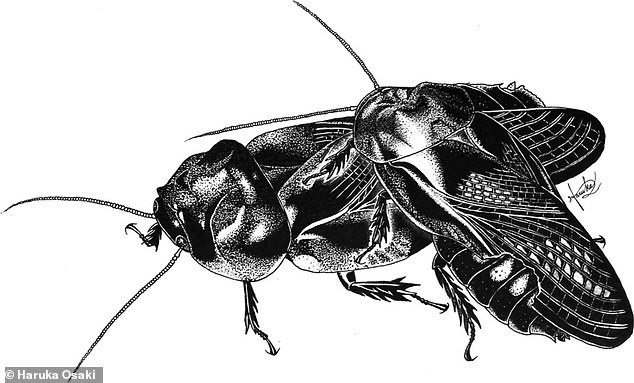 A drawing of a mating pair during mutual wing‐eating behaviour by study author Haruka Osaki. The individual in the front, which already has wings chewed, is eating the wings of its mate

Generally, the benefits of sexual cannibalism may include obtaining nourishment for reproduction or encouraging males to avoid mating with inferior females, previous studies show.

Sexual cannabalism in insects is well documented and tends to be the dominant female killing and eating the male after mating.

From the male’s point of view, it is evolutionarily beneficial for him to sacrifice himself for the good of his mate and his offspring, which benefit from his vital nutrients.

In some cases, such as the praying mantis, females eat males before they get a chance to mate, especially if they’re deemed unfit or unsuitable, and thus as seen to have more of a nutritional benefit than a reproductive benefit.

The male has evolved to put up a fight, often leading to a violent struggle between the pair, to increase his chances of mating successfully.

Another form of sexual cannibalism is called nuptial feeding, where the male presents a small ‘gift’ from some part of his body to the female for her to eat.

But this new study suggests the wood‐feeding cockroach benefits from a much more peaceful and harmonious form of cannibalism.

‘Mutual wing‐eating is like sexual cannibalism, but it differs in that one mate is not killed,’ they say.

In observations in the lab, the research team video recorded 24 young adult pairs of the species for three days.

In all, 12 of the pairs engaged in wing-eating until the ‘wings of both sexes became as short as those of wild parents’.

Overall, the area of the wings eaten was approximately 66.7 per cent of the entire wing area in males and 68.3 per cent in females in these 12 pairs.

Of the remaining pairs, nine ate wings partially and three pairs did not eat wings at all.

The team have also broken down the ‘typical sequence’ of mutual cannibalism involving the ‘actor’, the individual that is actively eating the wings, and the ‘recipient’, the mate of the actor that’s being nibbled.

Both male and female can be an actor, meaning the roles are reversed after each bout of nibbling post-mating. 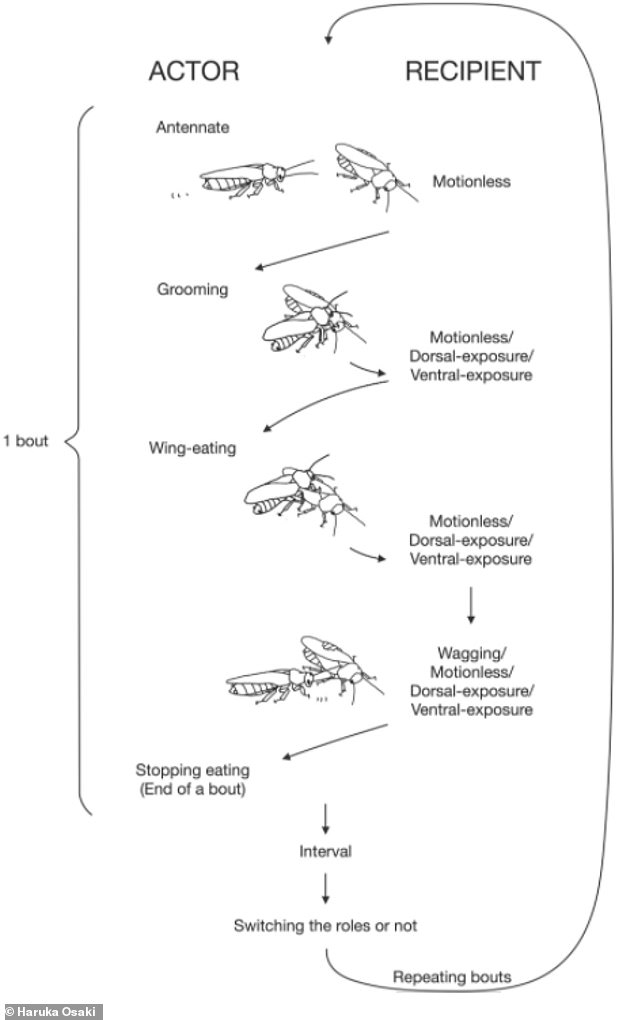 A typical sequence of mutual wing‐eating behavior. Both male and female can be an actor in each bout

In 12 of the 12 pairs, the actor initially approached its mate and touched the antennae to the other insect and licked its mate’s body parts, including the head, wings and legs, as a form of grooming.

After the recipients wagged, the actor stopped eating more often.

Researchers pointed out that since wings include no flesh, the value of wings as a food resource ‘appears to be negligible’.

The experts also believe that S. taiwanensis lives a life of what they call ‘true monogamy’, where it copulates with only one mate throughout their lifetime.

True monogamy is ‘complete and lifelong’ and is the only condition in which mating is freed of sexual conflict, but it ‘may be compromised by betrayal behaviour’.

The study has been published in Ethology.

Sexual cannibals, like the female raft spider, have long been thought to chow down on their mates as a result of uncontrollable aggression.

A 2015 study from the University of Melbourne suggests that these femme fatales are more calculated than their reputation suggests, and are in fact putting potential suitors to the test by attacking them.

The researchers, including Mark Elgar of the University of Melbourne, observed multiple mating trials between female and male raft spiders.

In the first trial, 16 females copulated with the male spiders.

Of this group, 11 of the females attacked the male during or after mating; only four of the attacks were fatal.

The next trial had similar results, with a high number of attacks, but few fatalities. Six of the eight females that mated with the males in this group then attacked them, but only two males were killed.

‘Females are sexually cannibalistic because they are testing the males, rather than just being inherently aggressive,’ Dr Elgar said.

‘We conducted extensive experiments and found no correlation between female foraging aggression and that displayed toward males.’

‘It actually appears there are many other potential factors involved, including the size of the males in comparison to the female, the female’s age and whether or not she is a virgin.’

‘Females were marginally more likely to attack smaller males, and that’s perhaps because they are easier to capture,’ Dr. Elgar said.

The ‘Black Widow myth,’ which assumes that only female spiders eat their partners, was refuted in a 2013 study.

The study from Masaryk University tracked the behaviours of Micaria sociabilis spiders over two years, and found that the males also partake in sexual cannibalism.