Apple could release new iPad Pro models in ‘a matter of days’: 11- and 12.9-inch devices will likely feature its M2 chip used in the latest MacBook that would make the tablets 20% faster than previous versions

Apple could release new iPad Pro devices ‘in a matter of days’ that are set to feature the same chip as the current MacBook Air, a Mini-LED display and support MagSafe Charging.

The news was revealed by Bloomberg’s Mark Gurman, who stated the tech giant has codenamed the 11- and 12.9-inch J617 and J620 – pricing for the two has yet to be revealed.

Adding the upgraded M2 chip to the iPad Pros gives them a 20 percent boost in speed than compared to their predecessors and allow users to easily work and create using the tablets.

Apple is set to host its quarterly earnings call on October 27, which is when the firm typically launches new products – and other rumors suggest the devices will be shipped in November. 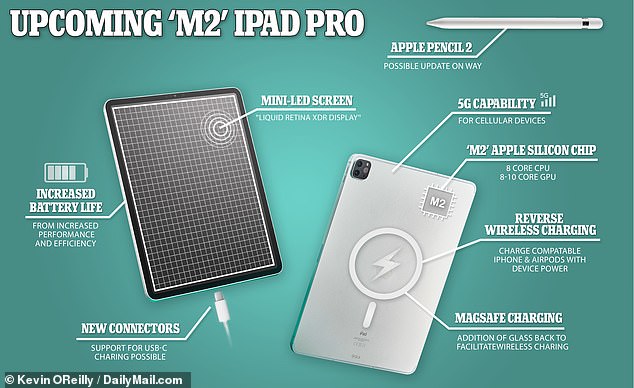 Apple is believed to launch new iPad Pro devices in just a few days. The tablets will support MagSafe charging, have increased battery life and include the new M2 chip

The 11-inch iPad Pro is expected to feature the same Liquid Retina XDR display that is found with the current 12.9-in iPad Pro.

However, the 12.9-inch is expected to boast a new Mini-LED display and improved camera.

The Mini-LED Display would provide the iPad Pro with more than 10,000 LEDs, allowing smaller dimming zones on the screen.

Rumors had suggested that the 11-inch would also get the display, but MacRumors reports it is unlikely to happen due to ‘supply and cost constraints.’

Both of the new devices, however, are believed to include the M2 chip that was just unveiled in June during a product event that launched new MacBook Air and Pro computers.

The chip surpasses the speed of the M1 by 20 percent, has a 35 percent more powerful GPU and a 40 percent faster Neural Engine.

‘Compared with the integrated graphics of the latest PC laptop chip, the GPU in M2 delivers 2.3x faster performance at the same power level, and matches its peak performance using a fifth of the power,’ according to Apple’s website.

‘The higher performance per watt from M2 enables systems to have exceptional battery life, and run cool and quietly, even when playing graphics-intensive games or editing massive RAW images.’

Apple is basically putting a chip designed for a computer into an iPad, making the tablet more suitable for digital creations.

Another feature both the 11- and 12.9-inch iPad Pros are set to receive is MagSafe Charging, which originally launched in 2006 for the MacBook Pro and it rolled out to the iPhone in 2020.

To facilitate the charging, MacRumors explains that Apple has been floating the idea of adding a completely glass back panel to the tablets.

However, because there is a lot of risk the company could feature its logo on the back that is made of glass instead. 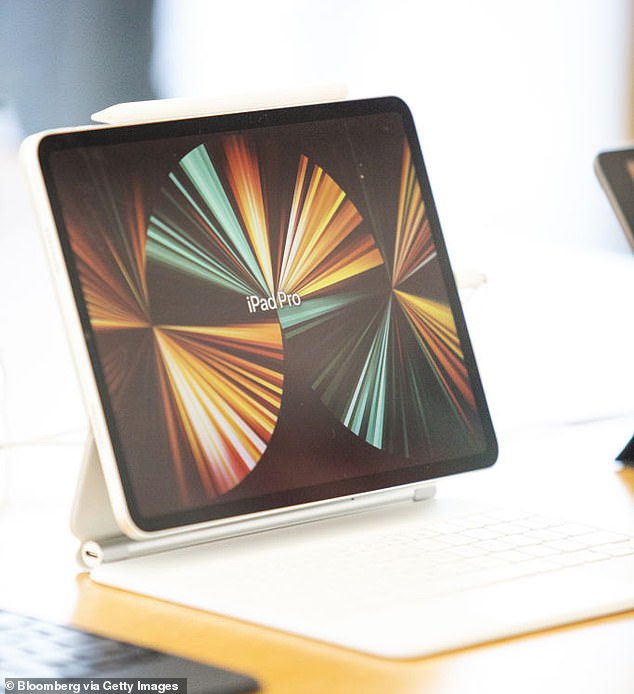 If Apple goes for the latter, MacRumors believes magnets will sit underneath the large logo that would align with the MagSafe charger.

The pair could also have new four-pin connectors at the top and bottom to support USB charging as well.

Along with new iPad Pros, Apple is said to be working on a new Pencil for the devices – but this has not yet been confirmed.

Apple has not announced plans for an event this month, which suggests the two iPad Pro devices could be revealed in a simple press release.