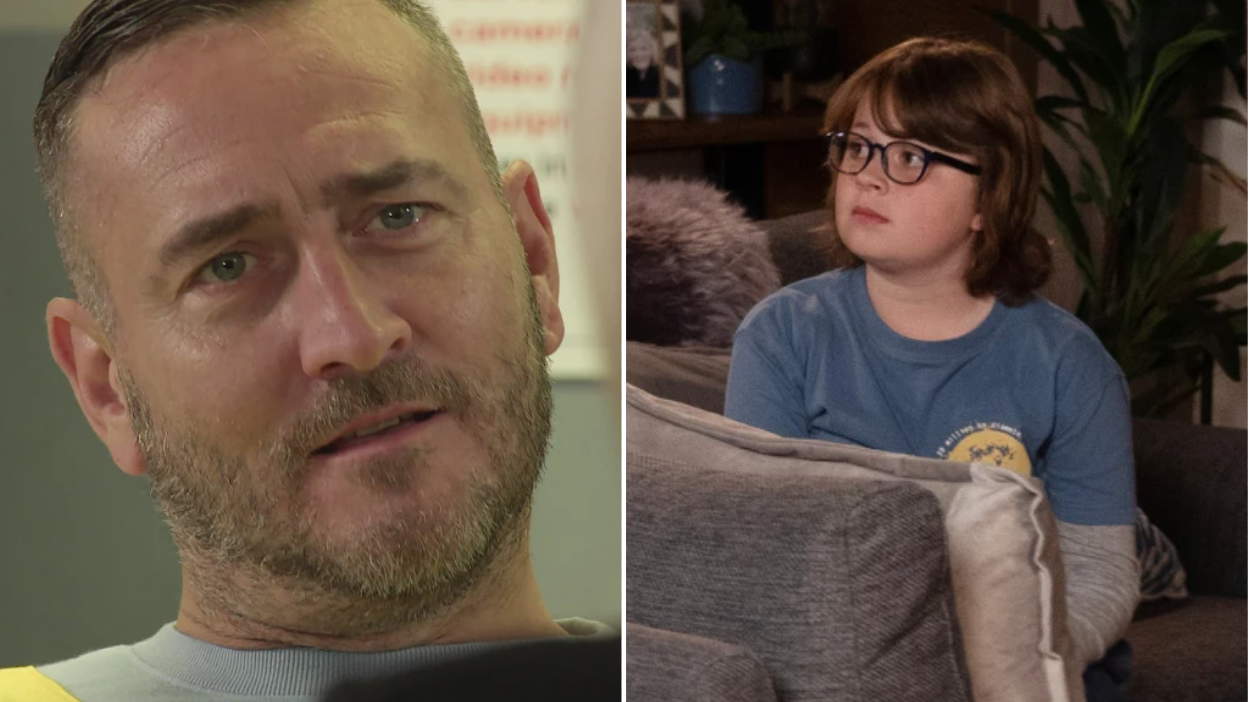 It’s been a year since evil Harvey Gaskell (Will Mellor) gunned down Natasha Blakeman (Rachel Leskovac) in Coronation Street, leaving her son Sam (Jude Riordan) traumatised as a result.

The tragic events of last October were in the minds of Nick (Ben Price), Sam and Leanne (Jane Danson) in tonight’s episode as they prepared to mark the anniversary of Natasha’s death. Nick got advice from Nina (Mollie Gallagher), who said that, rather than trying to shy away from the subject of Natasha with Sam he should open a discussion with his son and let him know it was ok to talk about his mum.

Meanwhile, Leanne was paying a visit to Harvey in prison, and it seems that being behind bars for a year hasn’t mellowed him at all.

‘Alright, gorgeous,’ he greeted Leanne – who was his intended target in the incident where Natasha was killed. ‘Miss me?’

He then revealed that Sam had been writing letters to him over a period of several weeks and he wanted Leanne to tell him to stop.

‘You need to tell the kid your mum’s dead, move on,’ he said, charmingly. Leanne explained the horrific effect losing his mum had had on Sam, rendering him so traumatised that he wasn’t able to speak for months. If she thought that this would get through to Harvey, she was wrong.

His only concern was for himself, and the possible risk he was in if the other prisoners got wind that he had a young boy as a ‘penpal.’

Sam’s motivation for writing to Natasha’s killer became clear when Leanne and Nick confronted him about the letters. He wanted to know what had made Harvey kill his mum. If people weren’t born evil, what had happened to Harvey in his life to make him do such a horrible thing?

‘I need to ask him why he’s horrible,’ he said.

‘He’s a thug, not a psychologist,’ Nick replied.

Nevertheless, Sam remains determined to get some answers from Harvey and made it quite clear to Nick and Leanne that the only way he would stop sending the letters would be if he could see Harvey in person.

Will Nick and Leanne let him go through with his request and confront the man who killed his mother face to face?