‘He is a tiny cretin of a man’: Owner of NYC’s top restaurant Balthazar BANS ‘bully’ Late Late Show host James Corden and brands him most ‘abusive customer EVER’ for berating and yelling at servers over his omelet

James Corden has been branded a ‘tiny cretin of a man’ and banned by the furious owner of iconic New York Balthazar restaurant – who claims he is the ‘most abusive customer ever.’

Fiery restaurateur Keith McNally has banned the Late Late Show host from his restaurants because of his treatment of staff.

Tony award-winner Corden, who earns $36million a year, shot to fame in the US and became well known for his cheeky British humor on the hit CBS show.

McNally, who has a colourful history of booting out celebrities of his exclusive restaurants, claims that Corden also behaved similarly at his former restaurant, Cafe Luxembourg, on several occasions and left one server ‘shaken’.

He posted two separate examples of Corden’s ‘extremely nasty’ behavior at the French brasserie in New York’s Soho district on his Instagram account.

The 71-year-old  started his post by calling the funnyman a ‘hugely gifted comedian’, before laying into his fellow Brit – who regularly tucks into meals with celebrities as part of a game on the show.

The furious owner said that he ’86’d’ the star – which means you have been banned – and claims Cordon found a hair in his main course when dining there in June, before demanding free drinks for the mistake.

Being 86’d is thought to have originated at Greenwich Village speakeasy bar, Chumley’s, on 86 Bedford Street, which had no address on the door – with guests ‘86ing’ themselves from the premisses if there was any trouble. 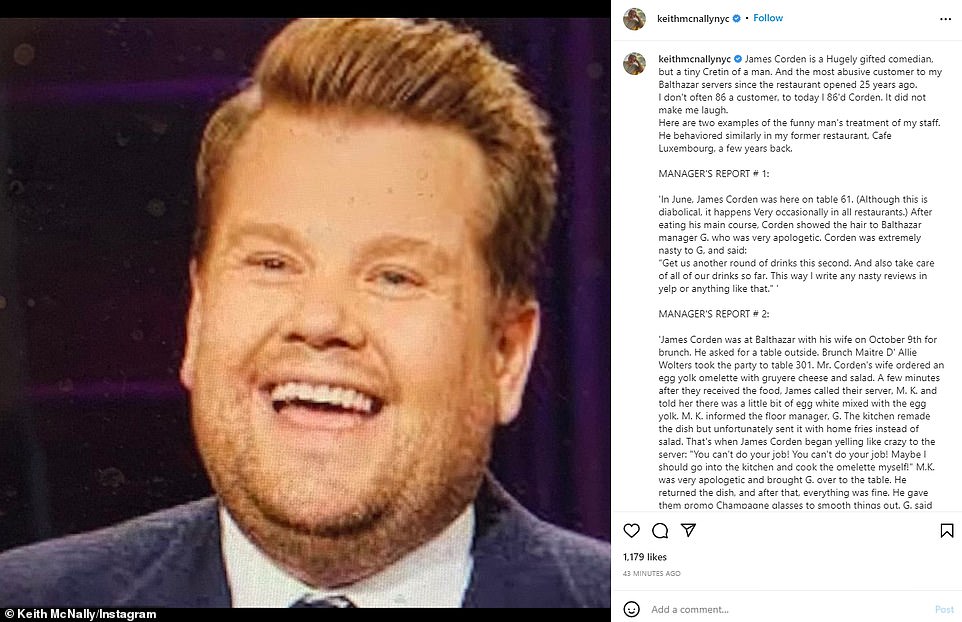 Restaurateur Keith McNally, 71, has banned the Late Late Show host from his restaurants because of his ‘extremely nasty’ treatment of staff 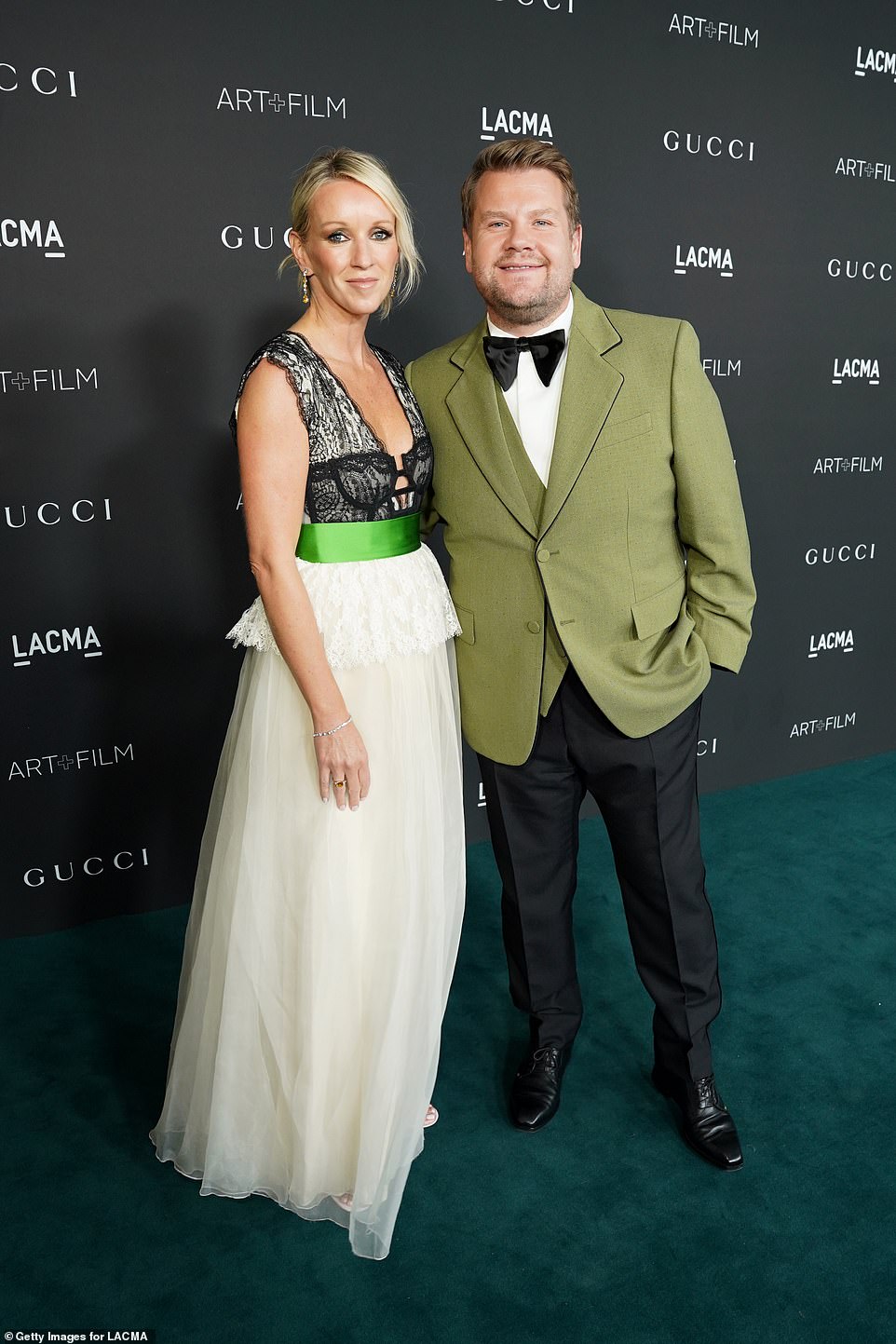 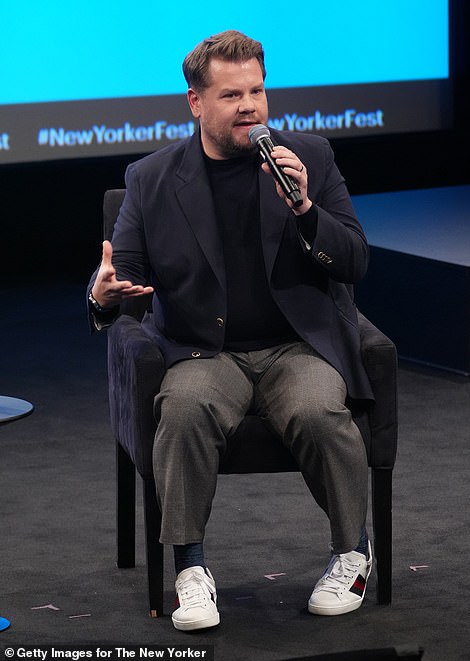 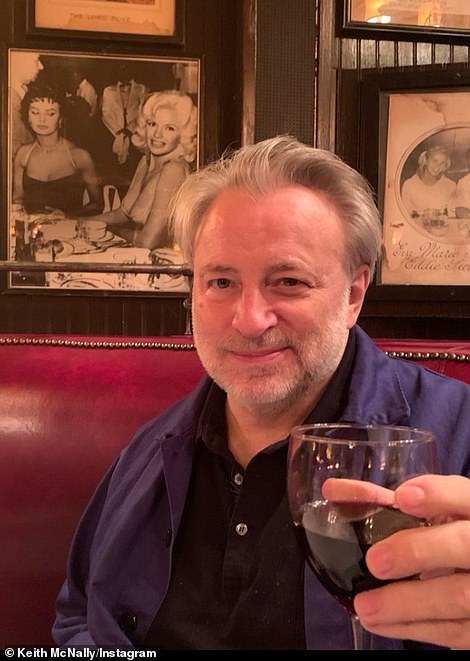 Corden, pictured left  on October 9 during the 2022 New Yorker Festival at SVA Theatre, has been branded a ‘tiny cretin of a man’ by Balthazar’s owner Keith McNally, right

Corden V McNally: Who do YOU think is right?

Corden V McNally: Who do YOU think is right?

He said: ‘After eating his main course, Corden showed the hair to Balthazar manager G. who was very apologetic.

‘Corden was extremely nasty to G, and said: “Get us another round of drinks this second. And also take care of all of our drinks so far. This way I write any nasty reviews in yelp or anything like that.”‘

In a second incident McNally claims that Corden was dining with his wife, Julia Carey, at the eatery on October 9 for brunch.

He says that Corden asked for a table outside, and Carey ordered an egg yolk omelet with a salad.

The couple complained to the server that there was ‘a little bit of egg white mixed with the egg yolk’  and sent the dish back.

McNally added: ‘The kitchen remade the dish but unfortunately sent it with home fries instead of salad.

‘M.K (server) was very apologetic and brought G. (floor manager) over to the table. 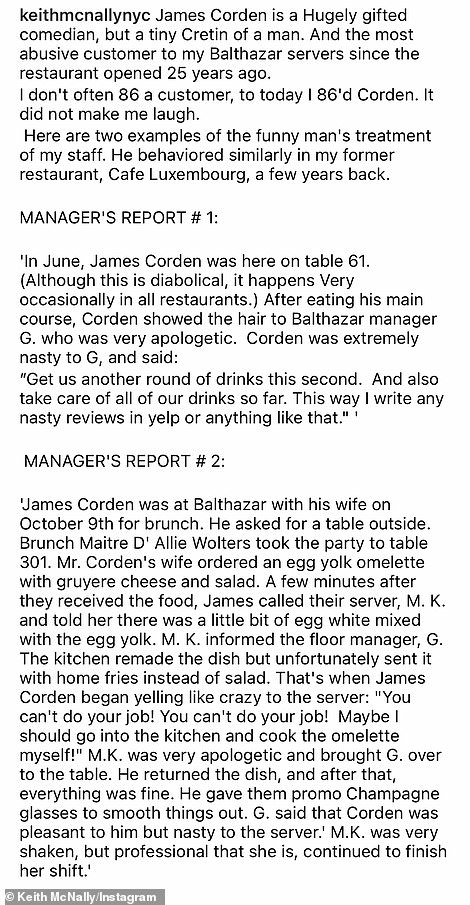 ‘He returned the dish, and after that, everything was fine.  He gave them promo Champagne glasses to smooth things out.

‘G. said that Corden was pleasant to him but nasty to the server. M.K. was very shaken, but professional that she is, continued to finish her shift.’

Corden, a big-time foodie, has not yet responded to the allegations.

DailyMail.com has reached out to a representative for James Corden for comment.

Fiery McNally has previous for banning ‘rude’ celebrities from his restaurant if he believes their behavior isn’t up to scratch.

He ripped into former vanity Fair editor Graydon Carter last year after he made a reservation at his plush Morandi restaurant – but failed to show up.

McNally who is the owner of NYC hotspots including Balthazar and Pastis, branded Carter a ‘fancy f***er’ after booking a table for 12.

But the owner, who was formerly a close friend of Carter, said that he had asked staff to specially prepare the restaurant to impress him.

In another scathing Instagram post he said: ‘Because Mr. Carter’s a restaurateur himself, my chef, manager and floor staff were eager for the lunch to go perfectly for him.

‘Extra staff were brought in to help with service, and two tables of six were meticulously set up and ready for Graydon Carter by 1 p.m. Only he didn’t show up at 1 p.m.’

Carter got his assistant to call the eatery to say that the editor had #forgotten to call and cancel’, with McNally left seething.

He claims that Carter ‘upset the equilibrium of the restaurant’ and ‘cost Moranti money’, before revealing that he had previous for failing to show up to reservations.