Melbourne’s Arts Centre has announced its new CEO, just as the organisation prepares for a massive transformation of its own structures and the surrounding Melbourne Arts Precinct.

It’s an interesting time to get started. Karen Quinlan takes on the role on October 3 and just over a year later, in early 2024, the Arts Centre’s State Theatre will close for several years for major renovations – though its two smaller theatres will remain open amidst neighbouring construction. 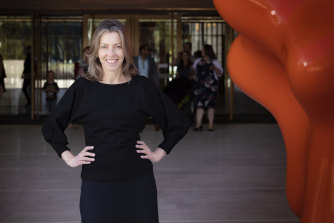 The renovations are part of a $1.7 billon project to rebuild the surrounding arts precinct, featuring a new promenade past Hamer Hall, the Arts Centre and NGV towards a new contemporary art gallery.

With audiences only just starting to return to live performance after two years of lockdowns, the companies that use the venue are concerned about the project’s impact. Quinlan isn’t fazed by the challenges this might pose for the Arts Centre itself, however. “There’s short-term pain for long-term gain,” she says matter-of-factly. “These are works that are very, very necessary.”

Quinlan, the current CEO of the National Portrait Gallery in Canberra and previous director of the Bendigo Art Gallery has faced similar situations before, albeit on a smaller scale. She says she has worked in institutions that shut down during major builds, but also points to her time at the Bendigo Art Gallery, where she worked for 18 years. During that time, there was a major expansion of the building. “We stayed open – a whole part of our building was being redeveloped where we had major exhibitions. So it’s possible.”

While she won’t have full details until she’s “in the role and behind the desk”, one part of her plan for Arts Centre Melbourne is to showcase the Australian Performing Arts Collection, over 700,000 pieces of art, music, memorabilia, costumes and archival material, with pieces regularly loaned out to institutions around the country. “My track record is very much about biography, narrative and storytelling,” she says. “What I love doing is working with that kind of content; telling those stories and those narratives.”

At both Bendigo and the National Portrait Gallery Quinlan pushed boundaries, transforming the institutions and bringing in new audiences. “I thrive in that space of reinvention and reimagining and pushing institutions to realise their full potential.”

“Her appointment will see one of Victoria’s most significant cultural institutions continue to flourish,” he said.

Quinlan says her central consideration is “that balancing act between creative ambition versus fiscal responsibility”. She sees the redevelopment as a big opportunity, despite the challenges it might pose in the short-term. “It’s always been a gathering place,” she says. “We want everybody to be part of this next phase.”

The refurbishment means that the Arts Centre can move with the crowd: “The audience has changed, and I think we have to embrace that.”

Quinlan also intends to explore new ideas in the digital space, building on what started during Victoria’s lockdowns (the Arts Centre already has an in-house digital broadcast team, which works with companies such as the Melbourne Symphony Orchestra and Melbourne Theatre Company on online streaming projects).

With the arts precinct development, she says it “doesn’t happen often that you have such an investment by government and I’m really excited about that. I think there’s enormous potential in that space for Arts Centre Melbourne, and all of the institutions that will benefit.”

She underscores how hard the arts have been hit over the pandemic and says supporting the industry is a major priority. “It’s about nurturing those individuals, those groups, those people and ensuring that they’re part of this big family that the Arts Centre Melbourne represents. So my vision is big, it’s exciting, it’s on the back of some difficult and tough years, but we can do it.”