Inside the society wedding of the summer! Sotheby’s boss Lord Dalmeny, 54, marries art adviser Harriet Clapham, 33, at Barnbougle Castle near Edinburgh with 300 guests

One of Britain’s most flamboyant bachelors has married his art adviser sweetheart at a lavish bash that saw the newlyweds dancing the night away with hundreds of friends.

The wedding was bound to be lavish with the son of the 7th Earl of Rosebery known for his flair — he once sported a suit for an auction which was cut away to reveal suspenders to honour what would have been Queen singer Freddie Mercury’s 65th birthday.

The Old Etonian partied with his new wife Harriet Clapham, who was wearing a stunningly sleek wedding dress with long sleeves as well as an intricate tiara.

The couple married privately before starting the celebrations with 300 friends by cutting into an extravagant eight-tiered wedding cake. 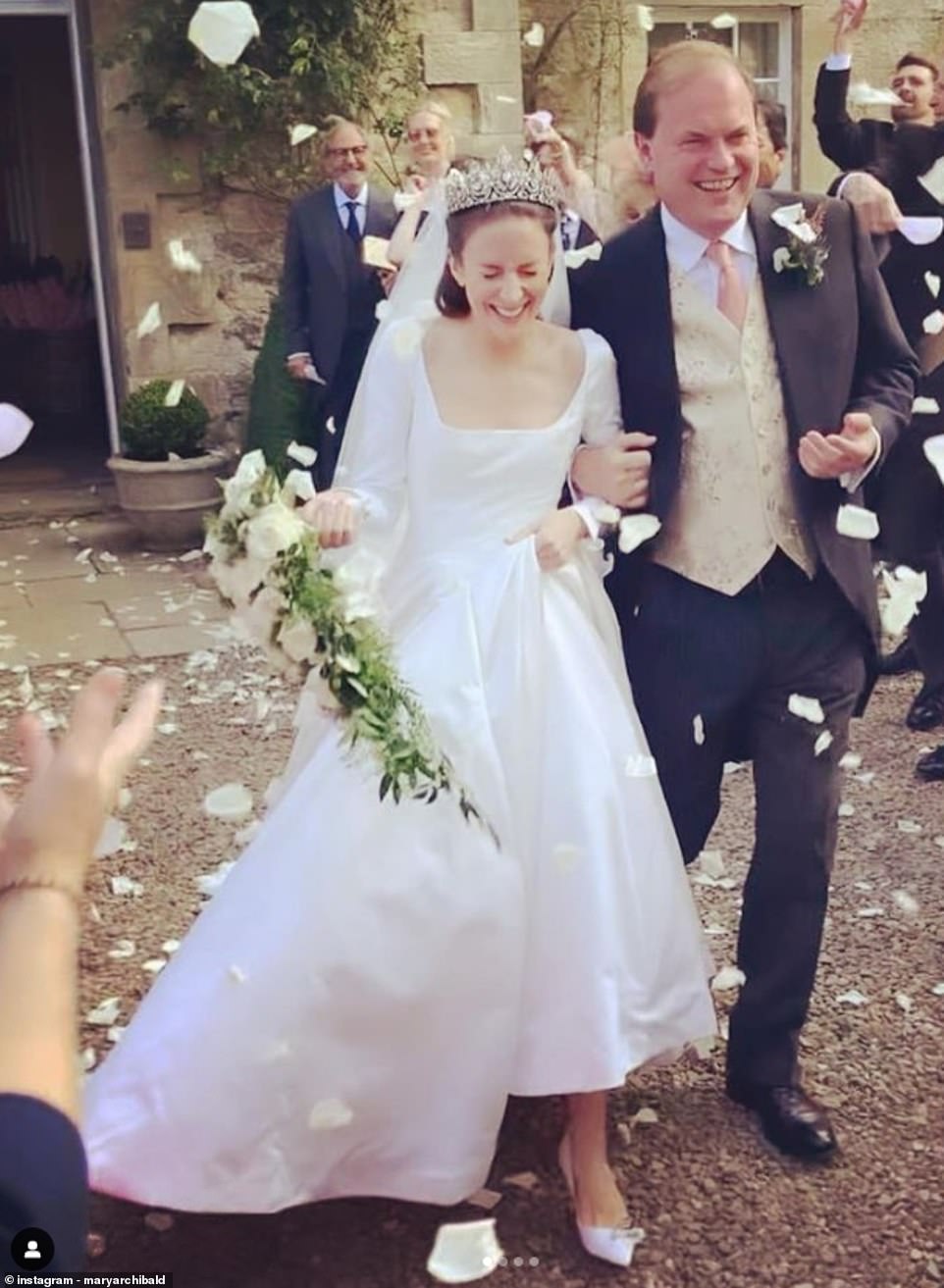 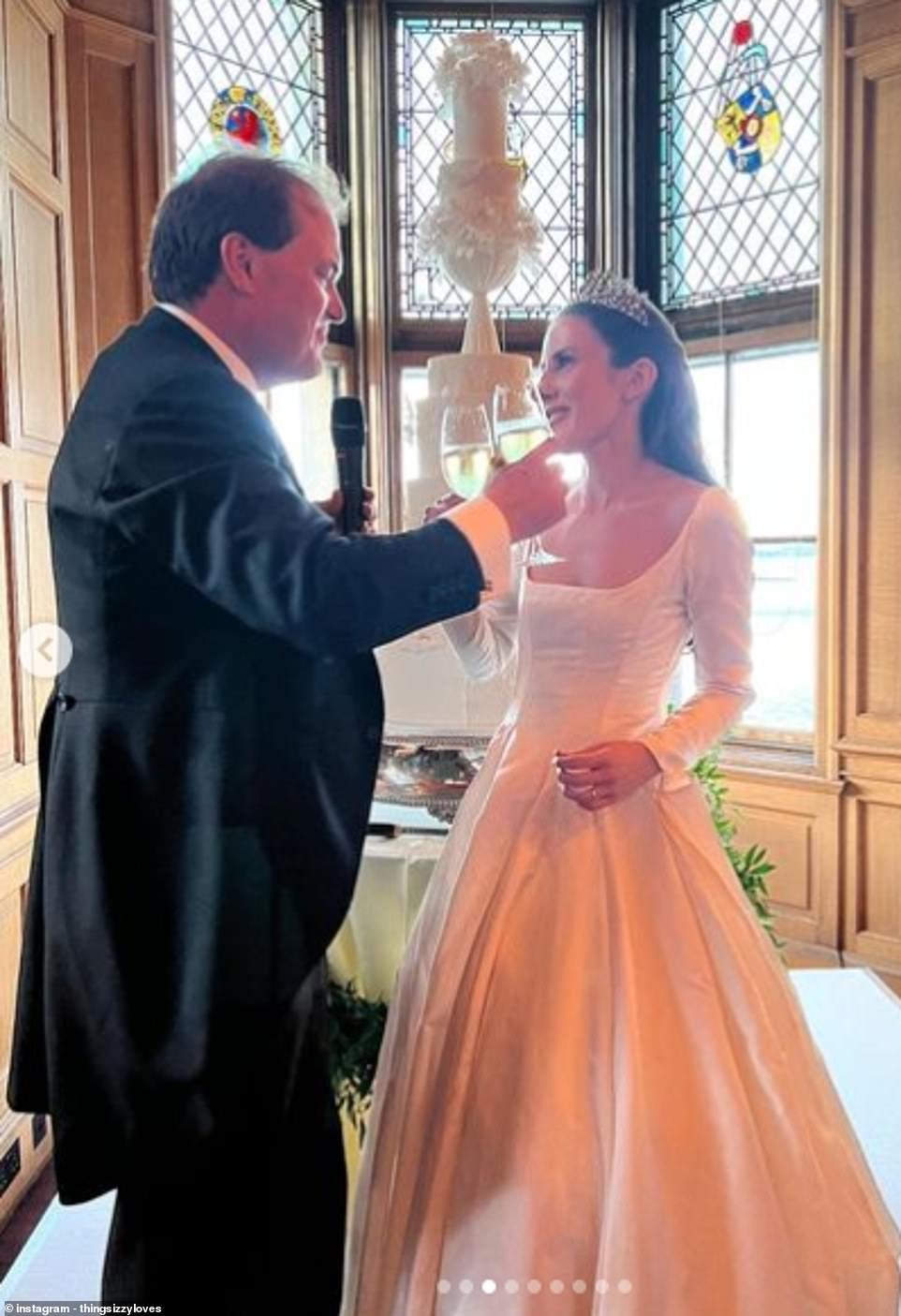 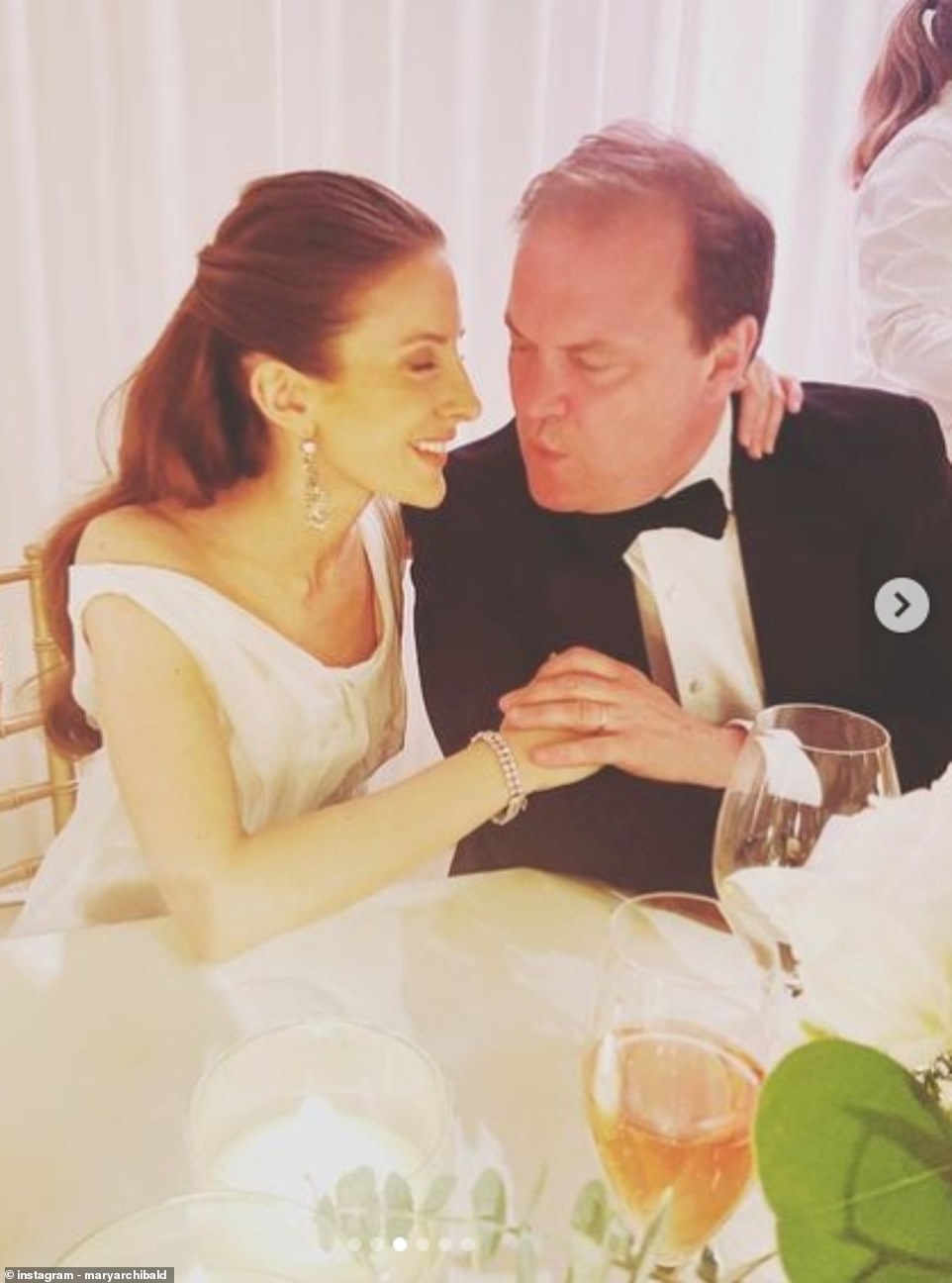 The loving couple appeared enamoured as they held hands at their table. Often seen hobnobbing with the likes of Damien Hirst and sculptor Sir Anish Kapoor, Harriet is fast becoming an influential figure in the art world 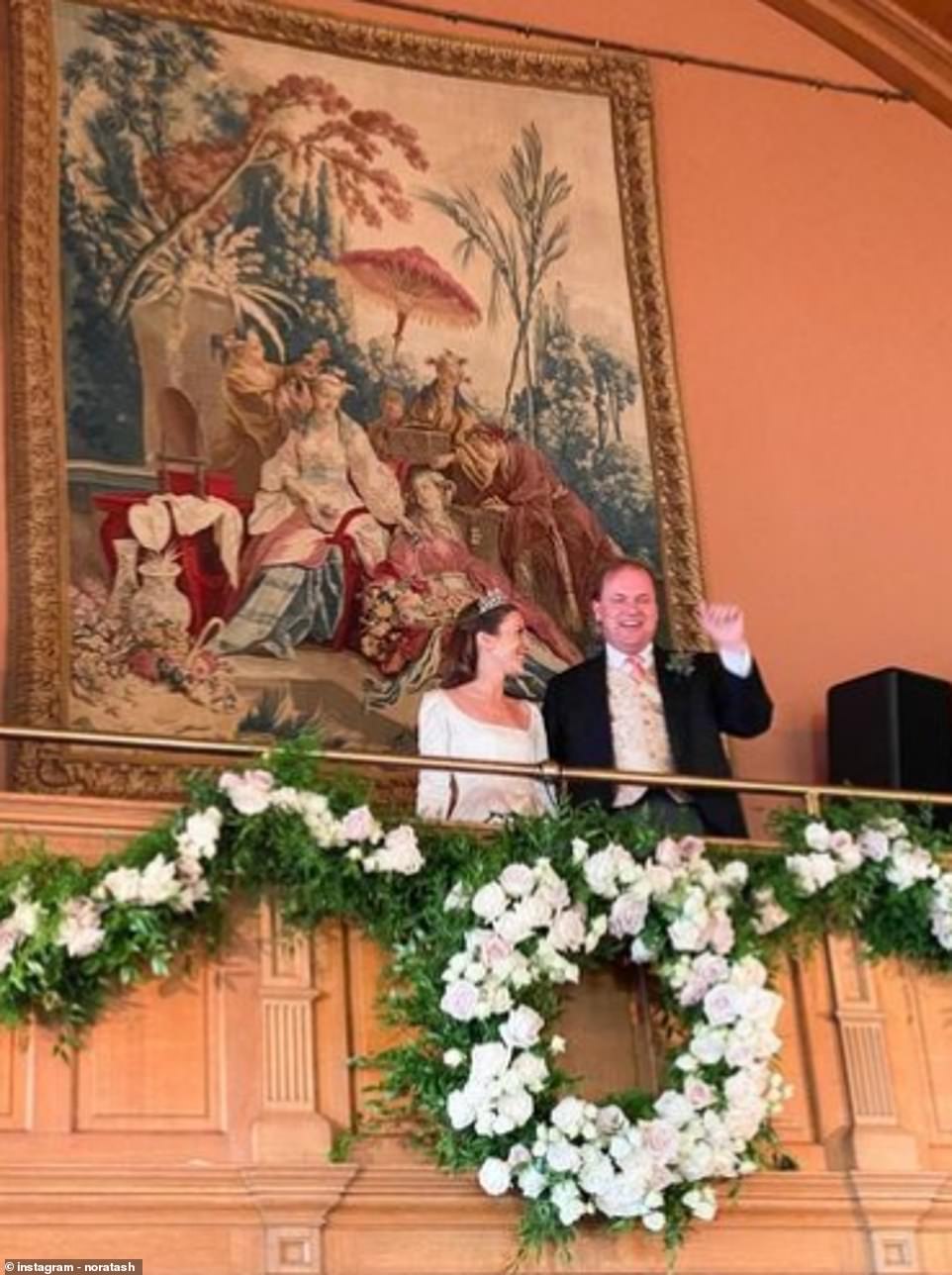 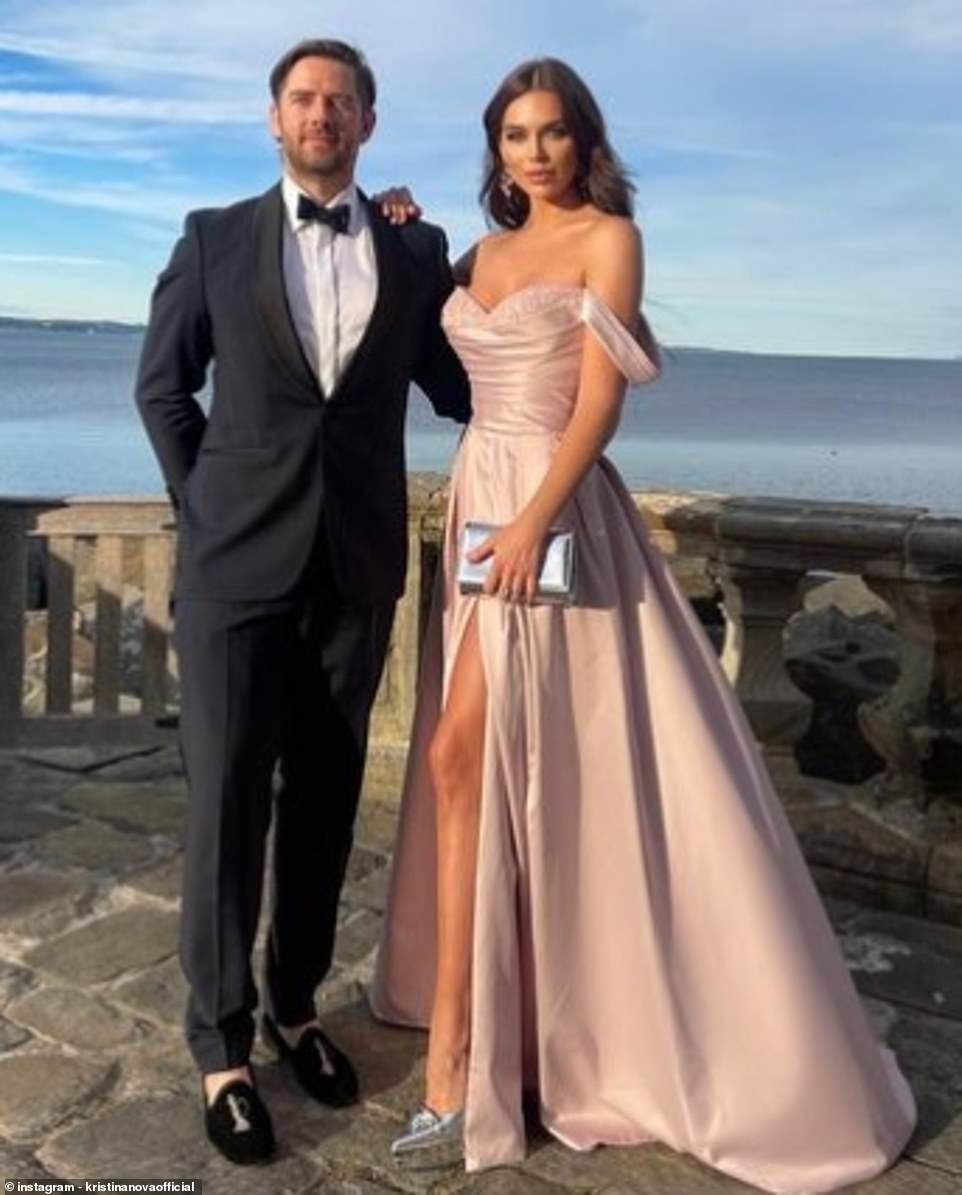 Hundreds of friends and family were dressed in their fanciest clothes as they joined in with the celebrations at the Scottish castle. Model Kristina Liliana Nova (pictured) attended in a stunning dress with a subtle slit down a leg. She wrote on her Insta page: ‘Scotland for Love Congratulations ❤️ @harrydalmeny @harrietdalmeny’ 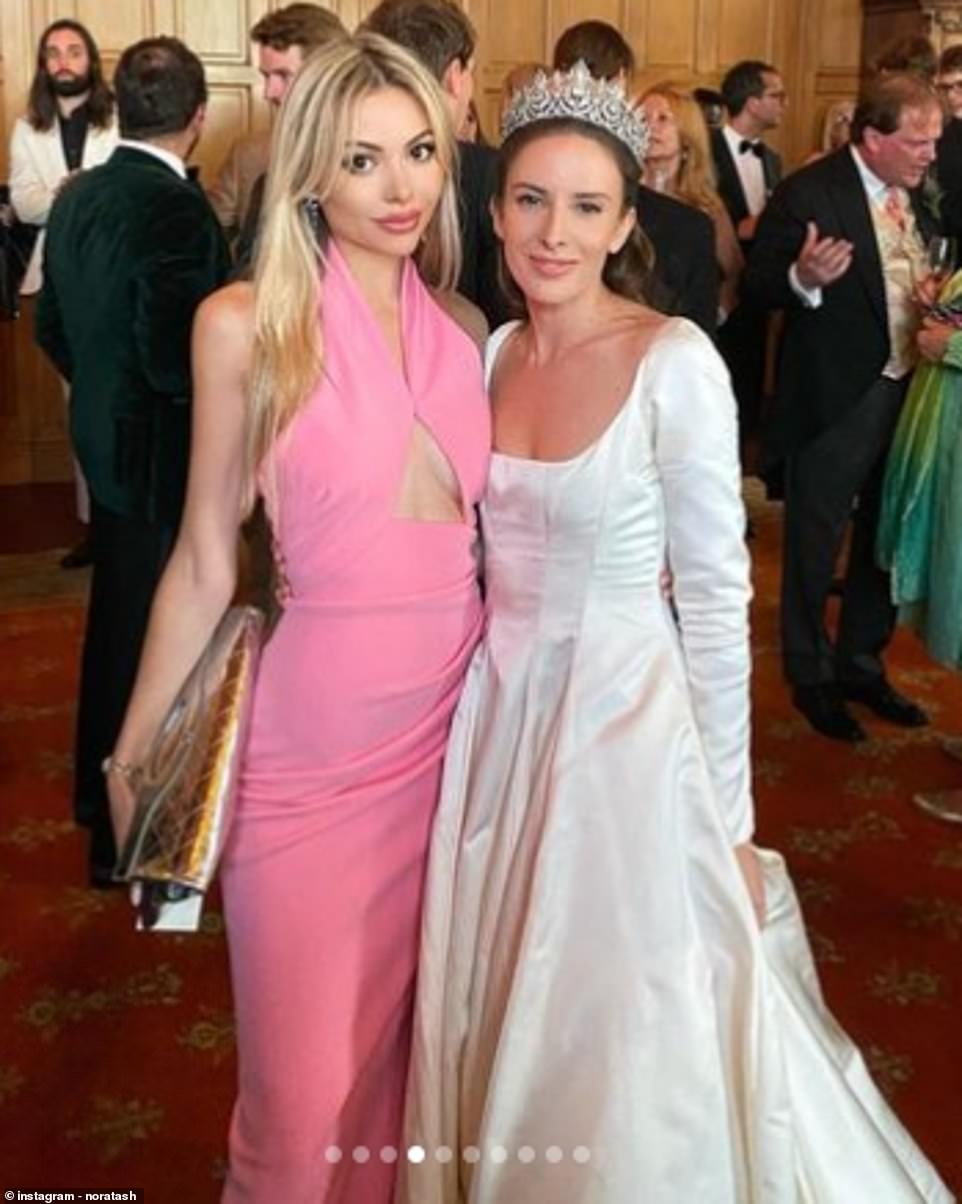 Harriet looked radiant in her a stunningly sleek wedding dress with long sleeves and gorgeously intricate tiara. Here she’s with Digital creator Nora Tash and she writes: ‘Had the most amazing evening celebrating the lovely @harrietdalmeny & @harrydalmeny Congratulations’ 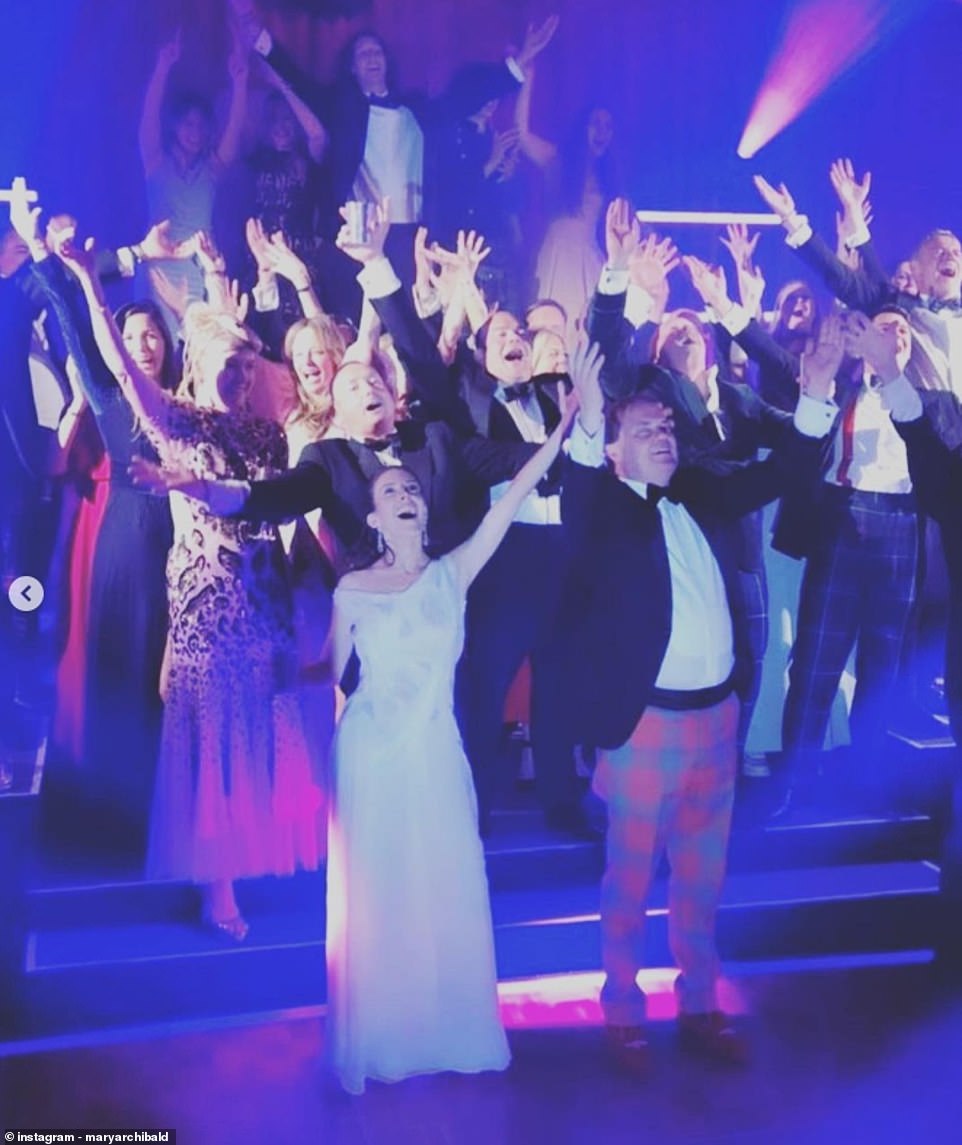 The swanky bash was complete with a disco tent, dance floor and bar at Barnbougle Castle, which dates back to the 13th century, although was rebuilt by the 5th Earl of Rosebery, who famously achieved his three ambitions of owning a winner of the Derby, marrying an heiress and becoming Prime Minister.

The Castle is on the Earl of Rosebery’s estate and is northwest of the family home of Dalmeny House.

Guests were dressed to the nines as they enjoyed bagpipes, beautiful place settings and a night to remember on the dancefloor.

Often seen hobnobbing with the likes of Damien Hirst and sculptor Sir Anish Kapoor, Harriet is fast becoming an influential figure in the art world. 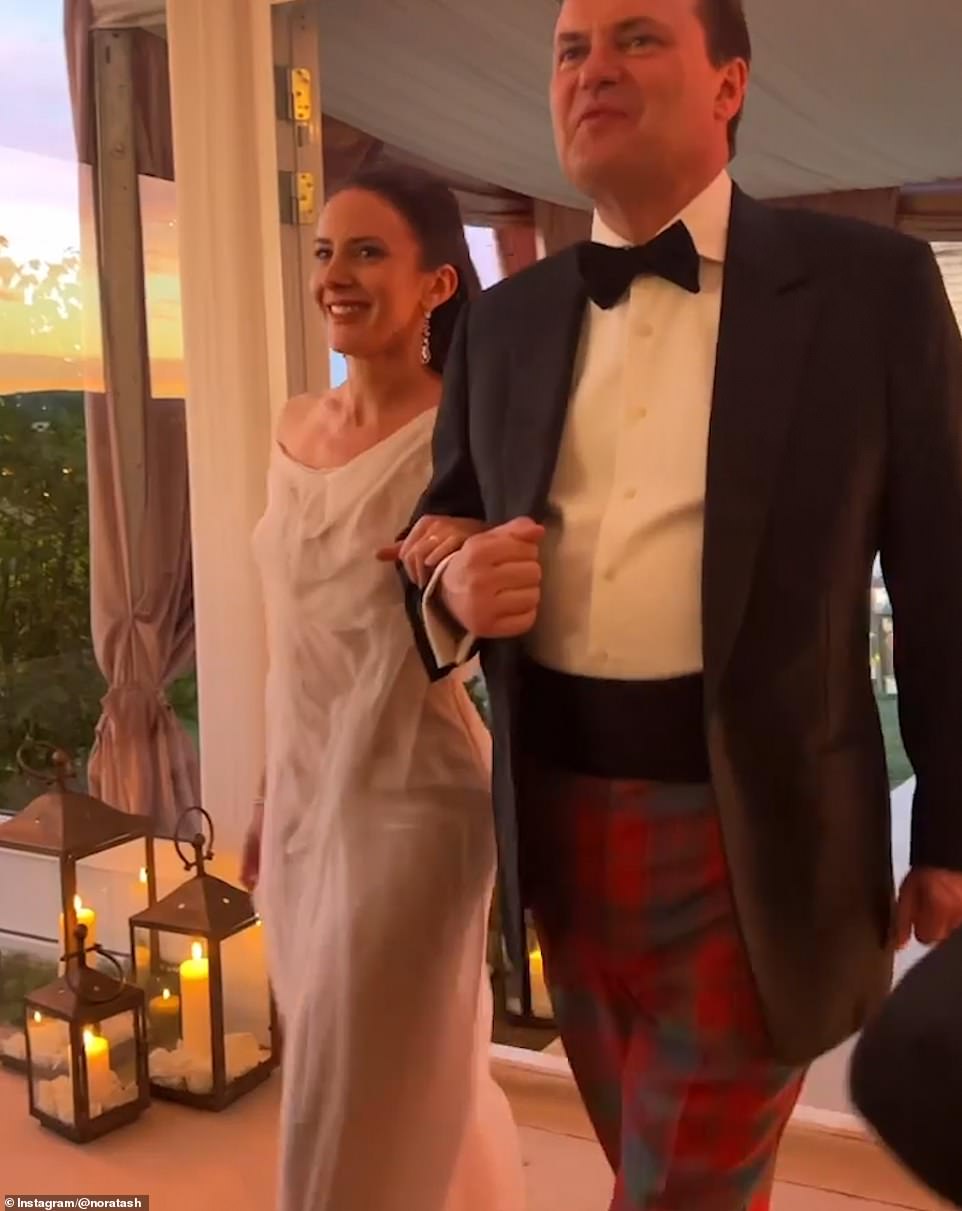 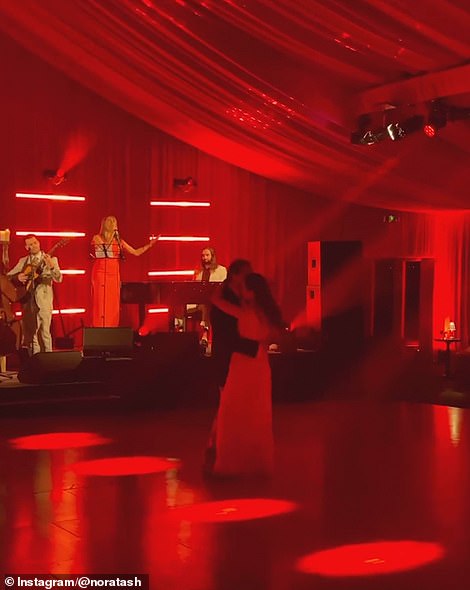 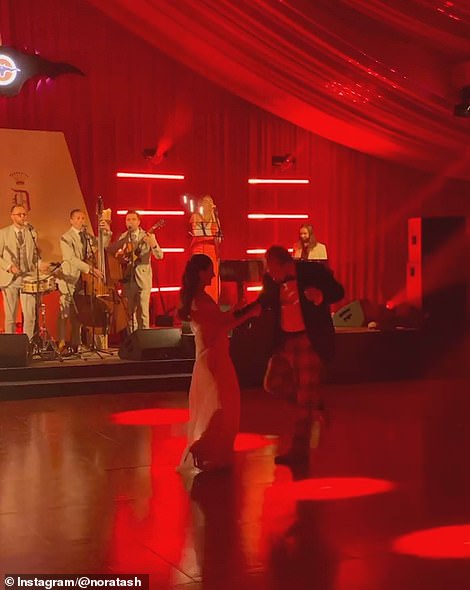 The newly weds had their first dance under a romantic red light as a five-piece band played for them. Still, Lord Dalmeny managed to jazz things up with some eccentric dance moves (right) 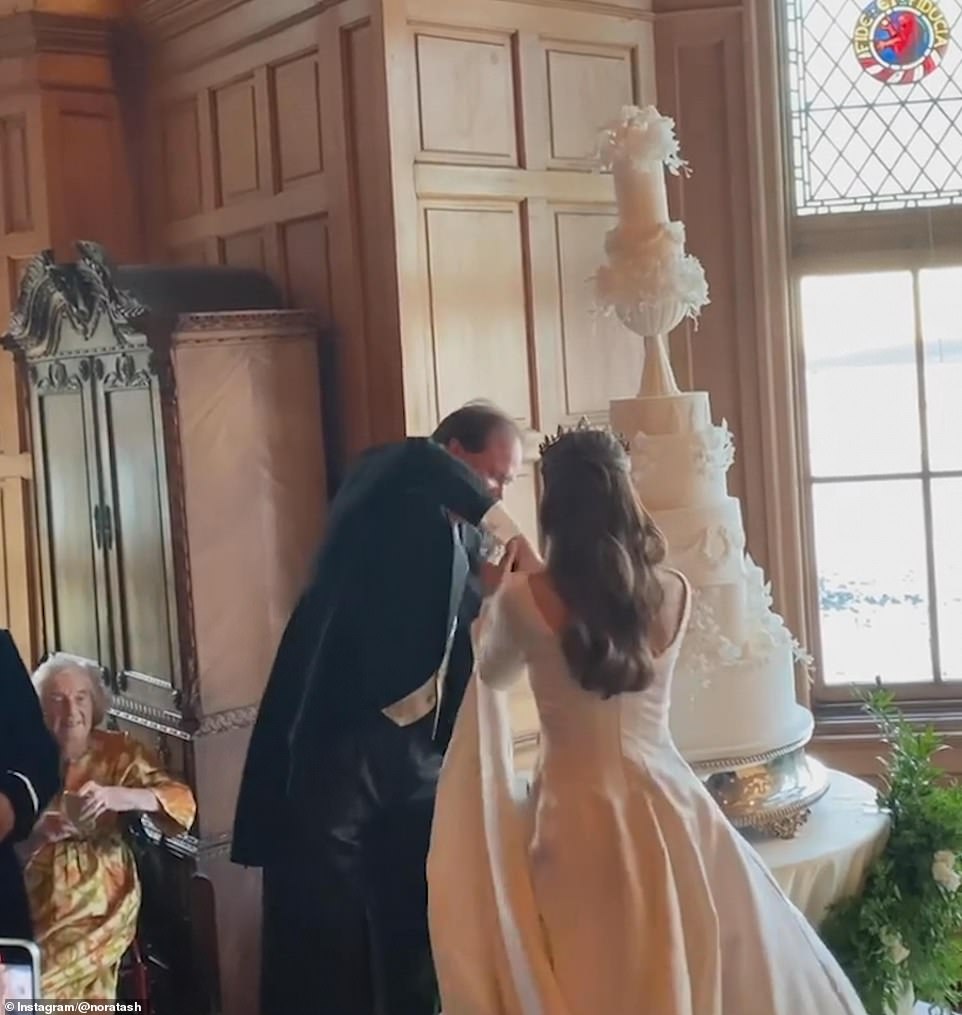 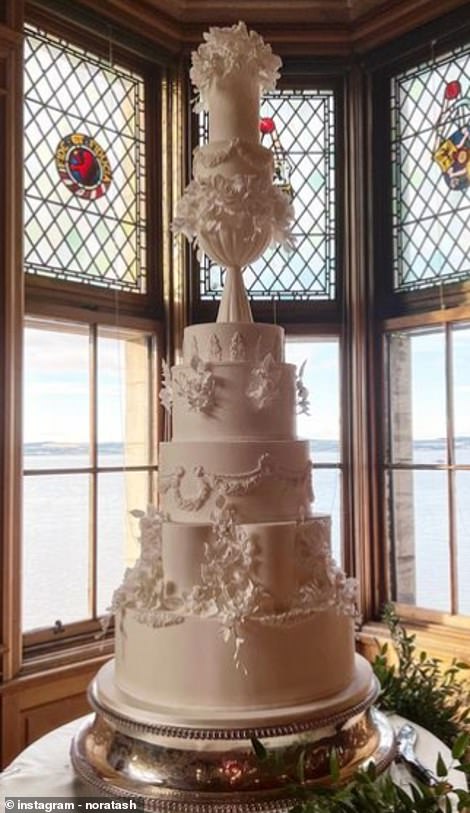 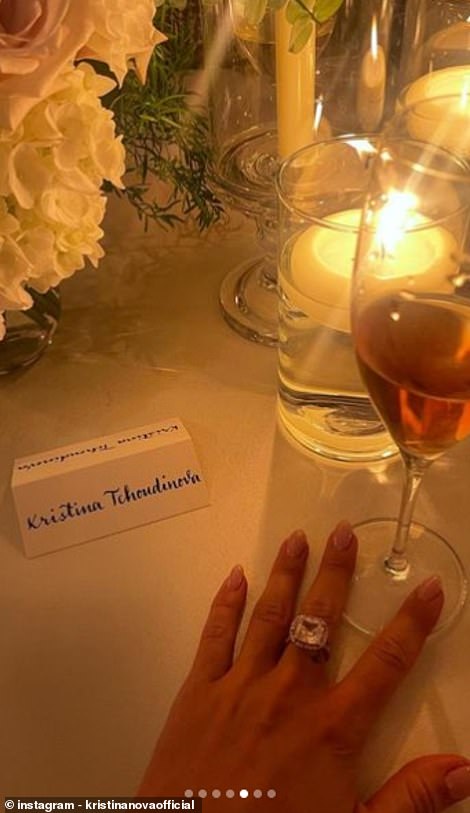 The cake, which was positioned in front of a set of windows overlooking the sea, was adorned with fine icing and had a whopping eight tiers (left). Guests shared what their place settings looked like, which were traditional with white flowers and handwritten place names. Here Model Kristina Liliana Nova shows us her place setting, while showcasing her stunning jewelry (right) 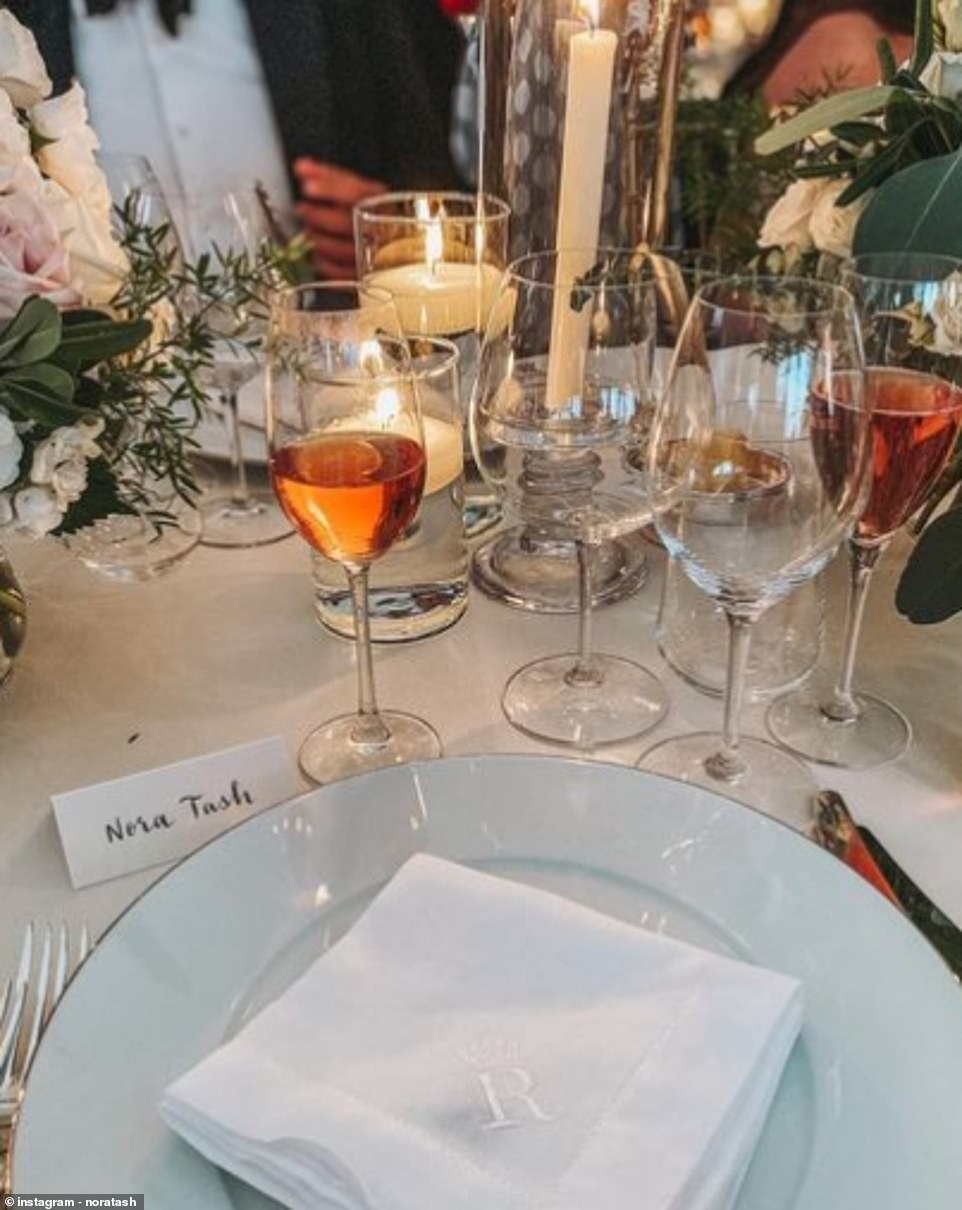 Digital creator Nora Tash shared a photo of her place setting also, showing an array of glasses and candles that gave the tables a cosy feeling that complemented the reassuringly traditional theme

Meanwhile Harry has four daughters and a son by his marriage to Caroline Daglish, from whom he parted five years ago, before romancing with former model Martha Sitwell.

It was first reported that the pair were dating in September 2020, when a friend told the DailyMail’s Richard Eden: ‘They’re very serious about each other.’

Among the wedding party was his ex-wife Caroline Daglish who said she was ‘delighted’ to have Harriet as ‘a member of our extended family’.

Lord Dalmeny is chairman of auction house Sotheby’s and has connections to the royal family: in 2013, Lord Dalmeny rode in the Queen’s carriage at Royal Ascot. 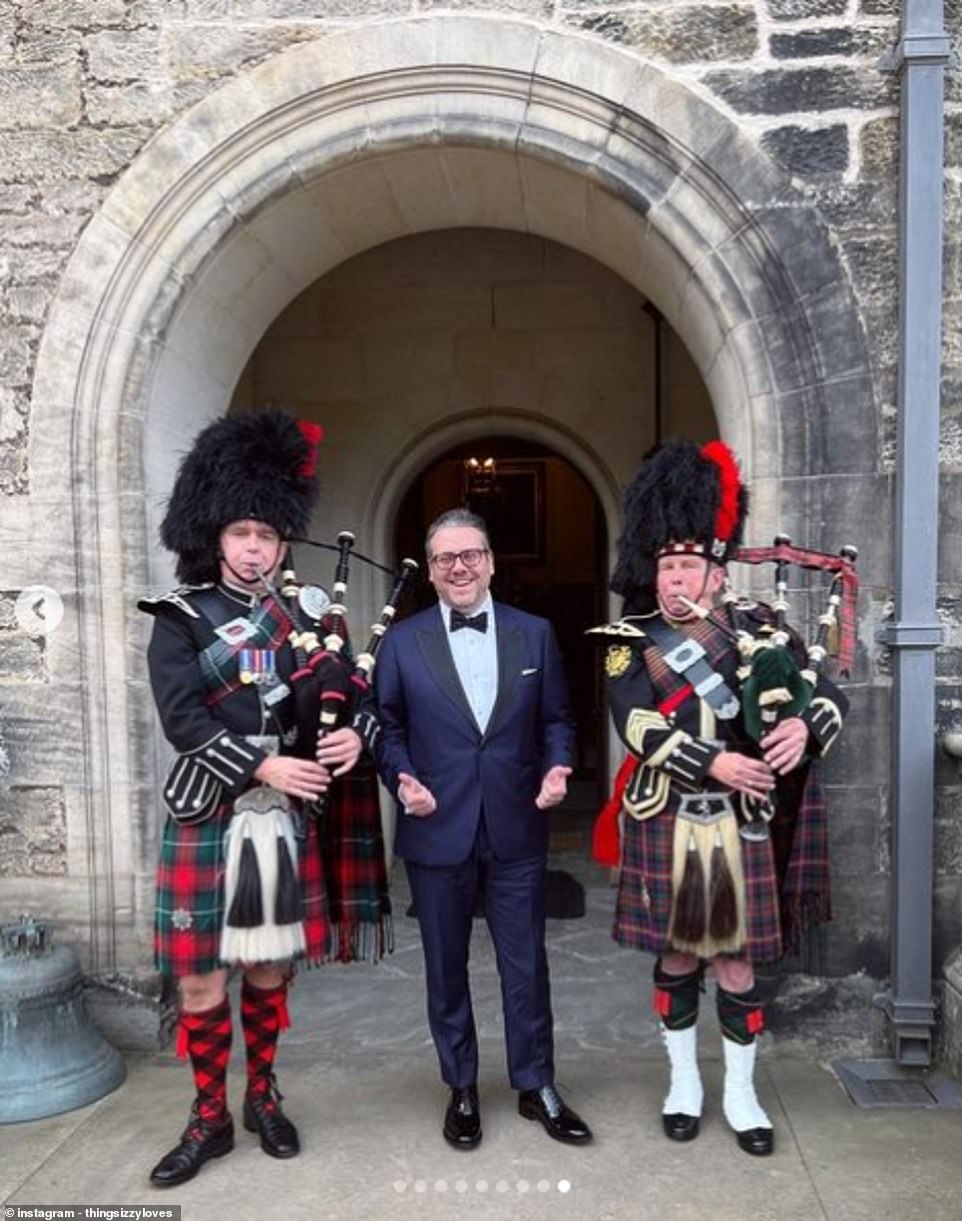 Londond TV and film Editor Rob Trela stood next to Bagpipe players, who provided a Scottish soundtrack to the gushing celebrations over the weekend 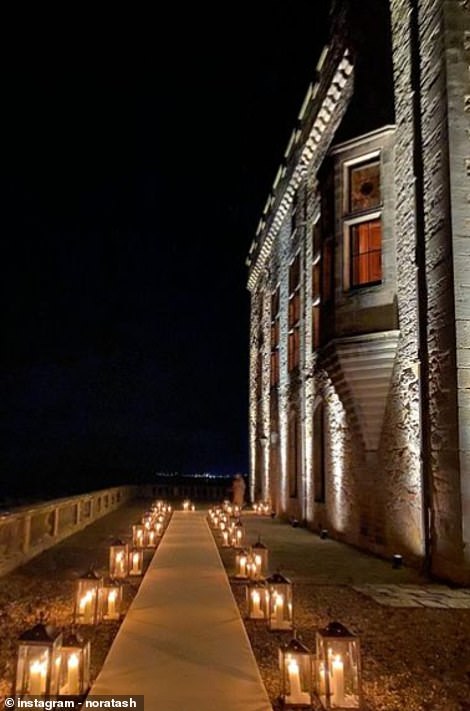 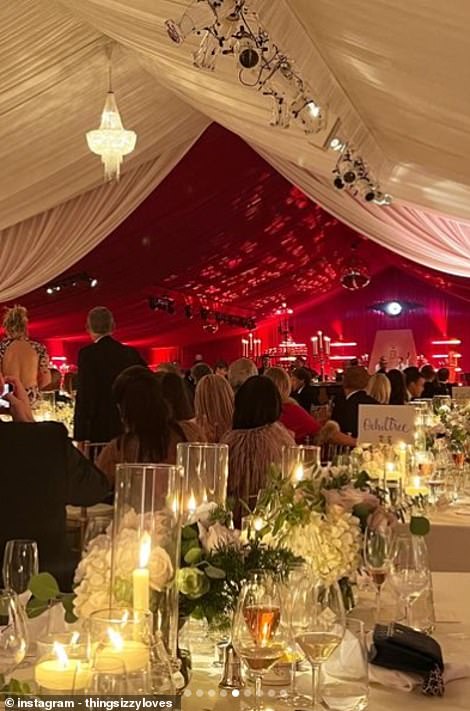 A wonderful array of candles in metal and glass boxes light up the walkways around the castle, which is on the waterfront at the Firth of Forth (left). The bright white tables adorned with flowers and shrubbery was joined onto the scarlet-lit dance floor, which had a band and later a DJ (right) 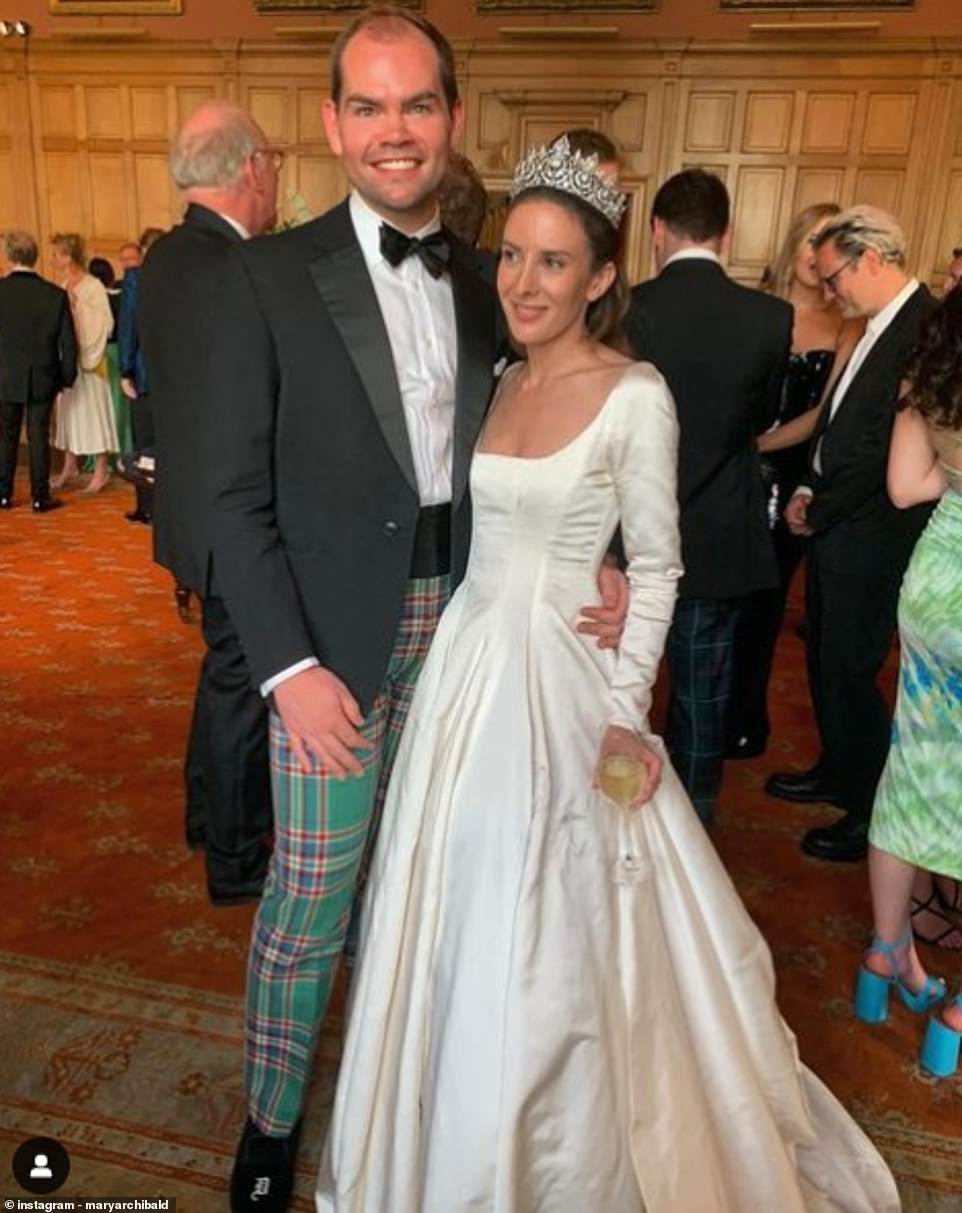 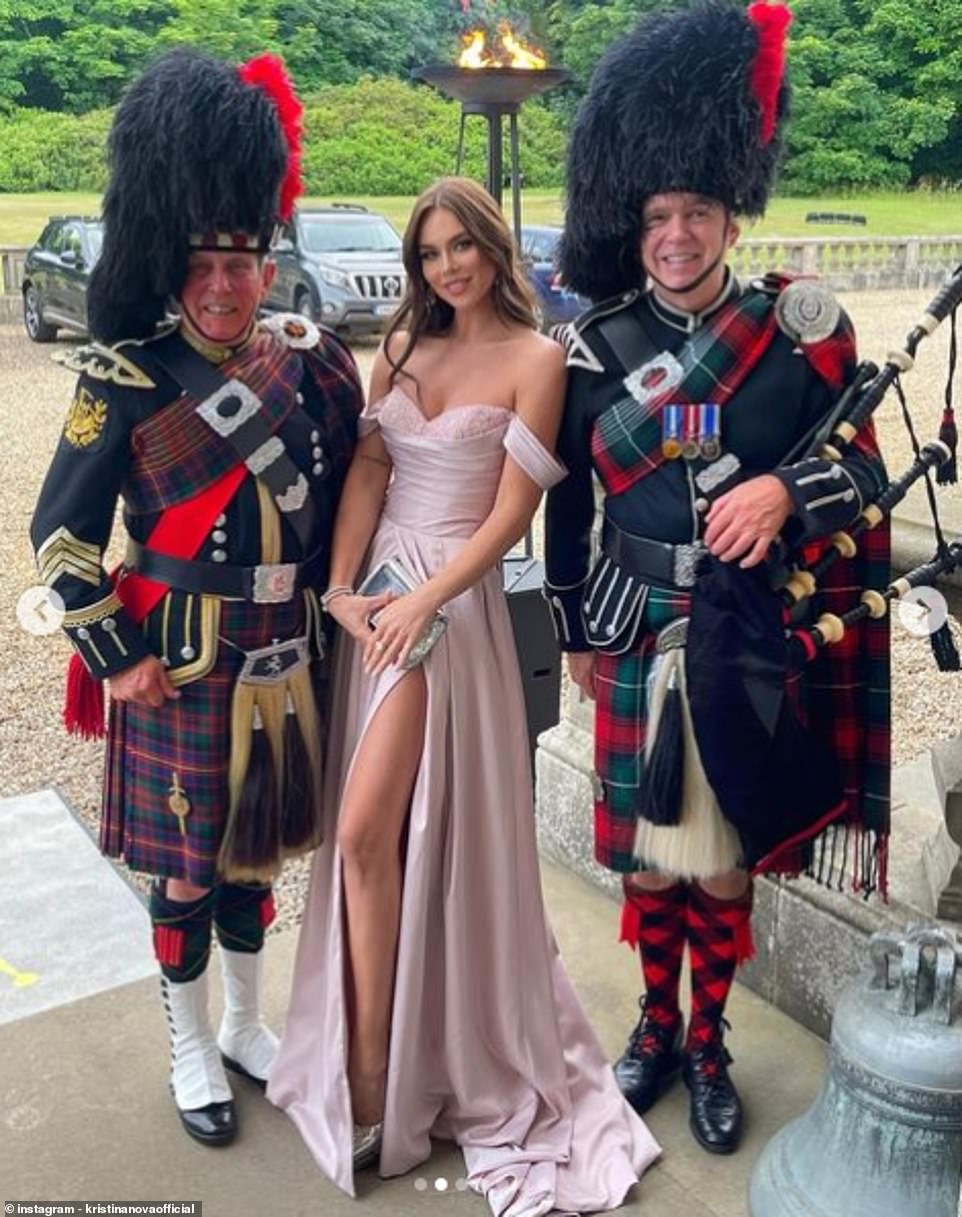 Model Kristina Liliana Nova also took advantage of a great shot, standing next to the Bagpipe Players. The musicians look happy to be posing with friends of the bride and groom during the day’s special moments

He has lent his talent to charity and political fundraising auctions, including a British Film Institute gala attended by guests including Hugh Grant, Olivia Colman, Gemma Arterton, Danny Boyle, and Dame Joan Collins.

He was married to Caroline until 2014. The couple share four daughters and a son, including triplets Lavinia, Celeste and model Delphi, who recently graced the cover of society bible Tatler.

After his divorce, Lord Dalmeny entered into a relationship with effervescent former model Martha Sitwell, although the pair parted ways in 2019.