For Max Allin, 34 and Greta Geninson, 31, April 11 was supposed to be their wedding day.

Instead, the two doctors spent their special day working at Western Australia's Geraldton Regional Hospital, preparing the emergency department for a potential flurry of COVID-19 patients.

When the couple found out two weeks ago that their wedding would have to be put on hold due to social distancing measures and closed borders, it wasn't the first time their plans had faced a bump in the road. 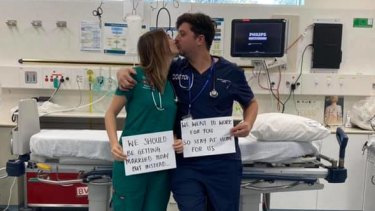 The doctor couple found out two weeks ago that their wedding would have to be on hold due to social distancing measures and closed borders.

The couple had their original wedding venue burnt down as a result of the bushfires.

"Greta is Jewish and she's convinced that this is happening because she ate a piece of Christmas ham," Mr Allin said.

Originally the couple had booked their April wedding at the Kangaroo Valley Bush Retreat and spent Christmas with Mr Allin's family in the UK nervously watching the pattern of the bushfires.

"We booked it before we got engaged, that is how much we liked it," he said. "I think after our first day back in Geraldton we got the news that the venue had burnt down."

Ms Geninson's mum found a place in Berry where the couple could have their wedding on the same day. But, two weeks ago, the couple was forced to make the call to cancel amid the health crisis.

"Max's whole family lives [in the UK] and my brothers from the UK as well, so we were like if our families can't be there there is no point," Ms Geninson said.

Many guests could not believe the couple's luck when they rang to tell them the news.

"It felt like a bit of a joke, to be honest," Ms Geninson said. "The other worry was because we've got so many friends in medicine, it meant that half of them were going to be working or in quarantine." 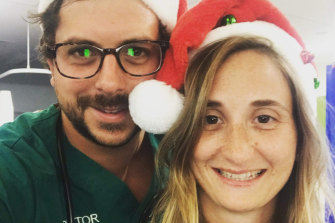 Max Allin and Greta Geninson are now hoping to get married in September.

Both emergency medical trainees based at Royal North Shore, the couple decided to stay at the West Australian hospital for now. Ms Geninson has been a doctor for more than six years and Mr Allin eight.

"[Royal North Shore] is where we're based normally, and that's where our jobs are when we go back to full-time work," Mr Allin said. "When we got back, we were only actually due to be here for two weeks, we were going to be in Sydney again. But then when all this happened when they closed the borders we just thought we'd stay here."

The department threw a celebration for the couple on Saturday.

"Everyone baked cakes and cupcakes," Ms Geninson said. "It's not the same but it's nice working with people who are really trying their hardest to make you feel happy."

As for third time's a charm, the couple now are praying that life will be back to normal by their new September 25 wedding date.

"I think honestly our mothers would have coronaries if we told them we were cancelling it again," Ms Geninson joked.