‘She needs this food!’ J.K. Rowling pleads with Morrisons supermarket for help after a nurse’s online order was cancelled at the last minute

J.K. Rowling took to Twitter to plead with Morrison’s supermarket for help after a nurse’s order was cancelled at the last minute.

The Harry Potter author, 54, shared a post written by a customer who discovered her online order had been terminated without warning, insisting she didn’t have anyone else who could buy the food for her.

Supermarkets have come under increased strain in recent weeks due to the coronavirus pandemic, with many introducing strict social distancing measures and specific shopping times for NHS staff. 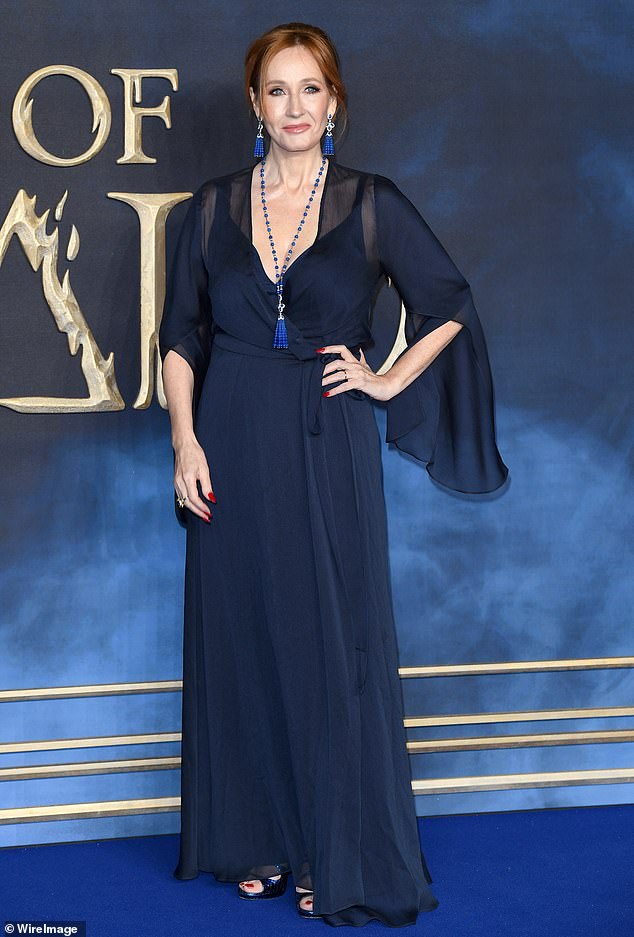 Need some help: J.K. Rowling took to Twitter to plead with Morrison’s supermarket for help after a nurse’s order was cancelled at the last minute

J.K. took to social media on Saturday to retweet a post by a customer only known as Lauren, who shared a screengrab of an email revealing her order had been cancelled in the middle of the night.

The post read: ‘Thanks very much @Morrisons. Rather than phone me, you’ve cancelled a much-needed order.

‘Three weeks ago that was booked! And you cancel in the middle of the night! Shoddy customer service.’ 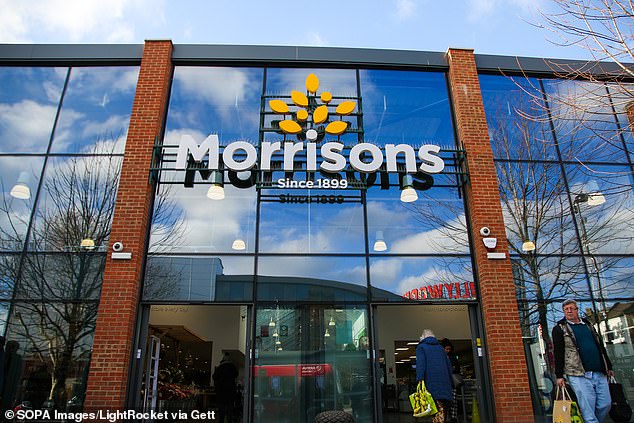 Rules: Morrisons has joined many supermarkets with introducing strict social distancing measures and specific shopping times for NHS staff due to the coronavirus pandemic 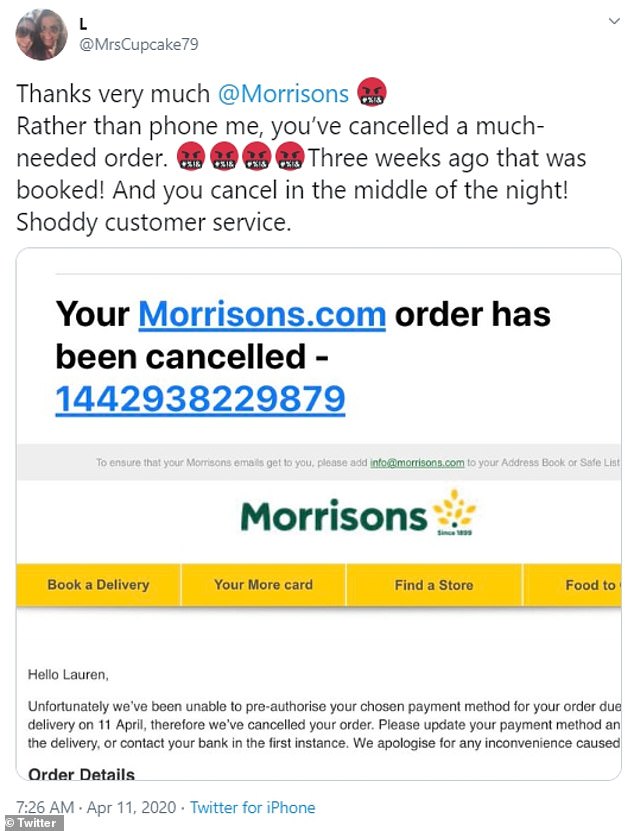 Really? The author shared a post written by a customer who learned her order had been cancelled without warning

Helping hand: J.K. retweeted the customer’s post while pleading with the supermarket to help, noting the customer was a nurse with two small children

J.K. – which stands for Joanna Kathleen – then shared the tweet, writing: ‘Hi, @Morrisons. You’ve cancelled the order of a nurse who’s also a single mother with two small children, and you’ve done it without warning in the middle of the night.

‘Her friends can’t help her out due to the lockdown. Could you sort this, please? She needs this food.’

Sorted! Several hours later J.K. took to Twitter again to clarify Morrisons were handling the issue, and later confirmed the nurse would be receiving her delivery

In a later post she added: ‘@Morrisons She has the funds, she’s checked with her bank, her credit card’s working and a phone call to her could have confirmed all of this. The order was placed 3 weeks ago. Could you help a key worker out?’

Morrisons later replied to the post writing: ‘We are on it now. We will sort out and keep you all posted.’

J.K. later replied to the post, revealing that the matter had been resolved and the nurse would be receiving her order later that day. 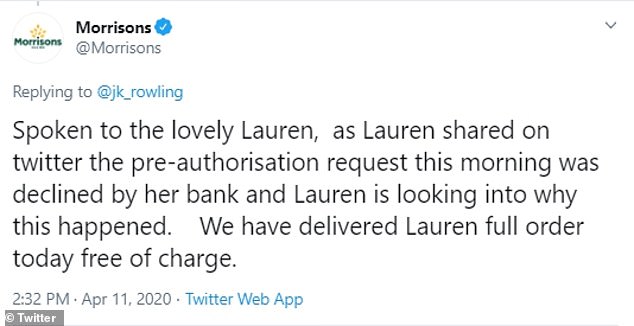 Sorted out: A spokesperson for Morrisons also confirmed to MailOnline the customer received their order free of charge

She posted: ‘@Morrisons have contacted the nurse & will deliver today. Thank you,’

The supermarket also tweeted: ‘Spoken to the lovely Lauren, as Lauren shared on twitter the pre-authorisation request this morning was declined by her bank and Lauren is looking into why this happened. We have delivered Lauren full order today free of charge.’

A spokesperson for Morrisons also told MailOnline: ‘In this case, the bank declined the customer’s payment which is why the order has been cancelled.

‘We understand that this has caused our customer some distress, as it was her day off, and we are in touch with her to arrange a good time for delivery, which will be free-of-charge.’