It’s been seven months since Rihanna gave birth to her son, and in an incredibly shocking turn of events, she decided to treat fans to an early Christmas present: a first look at her and A$AP Rocky’s son!

On Dec 17, Rihanna uploaded her first TikTok video to her brand new account, and to say the internet is losing it would be an understatement. The “Umbrella” singer shared the first look of her son, with an absolutely adorable video of him with the caption, “hacked.”

In the video, we see him laughing and smiling from ear to ear (with Rihanna giddily laughing along with him), and soon after, he has his eyes set on snatching and eating his mama’s phone. Then we cut to him in a super-warm blanket, looking transfixed with the moving cars outside and proud mom Rihanna making noises with him. We then get shots of him yawning, a close-up of his hands, and then we end the video with him trying to eat the camera again.

A TikTok masterpiece, and if you’re saying you didn’t watch this on repeat with joy, then you’re lying to yourself.

As we said, the internet is losing it over this first-ever look at her and A$AP Rocky’s son, with many commenting things like, “It feels abnormal that we get to see him before Christmas it’s like a gift.” Along with that, everyone is freaking out at how much he looks just like his mama, with fans chiming in with comments like “AWWW HE LOOKS JUST LIKE HER” and “He’s adorable! Looks just like his mama!!”

Rihanna and A$AP Rocky have been dating since 2020, and in early 2022, they shocked everyone by confirming Rihanna was expecting their first child together. On May 19, 2022, it was confirmed they welcomed a son, and seven months later, she treated fans to this video of him. 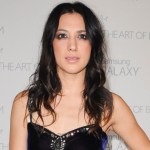 In a previous interview with EOnline, she was asked if she noticed that she turned into one of her parents after becoming a mom. “Wait, that’s a thing? Wait, it’s a real thing?” she said with disbelief in her tone. “Honestly, it happened to me! It is weird! Even the little things that annoy me about [my mom], I do it. I literally make all of the same faces. I say the same things. I clear my throat the same way. I move my mouth the same way, and it’s, like, weird!”