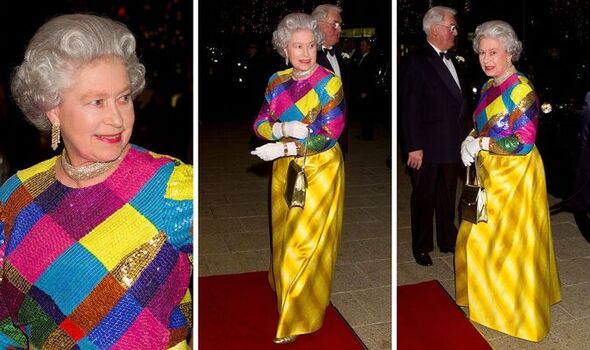 Queen Elizabeth II had impeccable style, and could be spotted for miles in her monochromatic outfits and hats. However, on one particular occasion HRH pushed the boat out and went for an extraordinary never-before-seen look.

On November 29, 1999, the Queen stepped out at The Royal Variety Performance taking place in Birmingham Hippodrome.

HRH, who was 73 years old at the time, wore a show-stopping, floor-length gown which was a colourful masterpiece.

It was a harlequin dress, boasting an array of multicoloured asymmetrical sequinned diamonds.

The skirt of the dress was a bright canary yellow and appeared to be satin.

However, it was the bodice and sleeves of the dress that really stole the show.

It was covered entirely in diamonds, in varying sizes and colours including pink, blue, red, silver, yellow and green.

Unsurprisingly, the fashionable Queen paired the extravagant number with some funky accessories, including a pair of white gloves.

She carried a petite gold handbag and donned some shimmering jewels for the special event.

These included a cuff-style, pavé-set diamond necklace and matching bracelet, with diamond fringe earrings given to her by King Hassan II of Morocco.

Her shoes were mostly concealed by the dress but royal fans can see a glimmer of gold, which perfectly complemented the bag.

As for makeup, the monarch appeared to ditch eyeliner and mascara in favour of a pop of colour lipstick in hot pink.

Despite bright colours being almost synonymous with the Queen, this ensemble was particularly striking.

Royal fans marvelled at the late monarch’s bold fashion statement on Twitter back in 2018.

@CrownPandora added that “we need to see this again”, with @TojoriJ joking that Princess Anne would be “willing to recycle” it.

@THERoyalCrabbit commented: “I remember this dress WELL. It struck me as something you don’t normally see on HM. Bolder than her norm. I liked it.”

@TojoriJ seconded this: “Indeed! I’m eager to know what/who influenced her to wear this dress. This is an uncharacteristic choice of HM.”

The Queen’s typical royal uniform consisted of a large hat and coat dress, both in the same bright colour – lime green, royal blue and hot pink to name just a few.

Sophie Wessex once revealed she did this so that she could be spotted in a crowd by royal fans who wanted a glimpse of the monarch.

She’d pair this with some sensible black shoes and a demure Launer handbag.