Tess Daly admitted she was struggling with the unpredictability of lockdown in a candid Instagram post on Friday.

The Strictly host, 51, took to Instagram to share a glamorous selfie and told her followers she is ‘keeping faith that brighter days are around the corner’.

It comes a day after Rhian Sugden, 33, expressed her regret over her ‘sexting scandal’ Tess’ husband Vernon Kay. 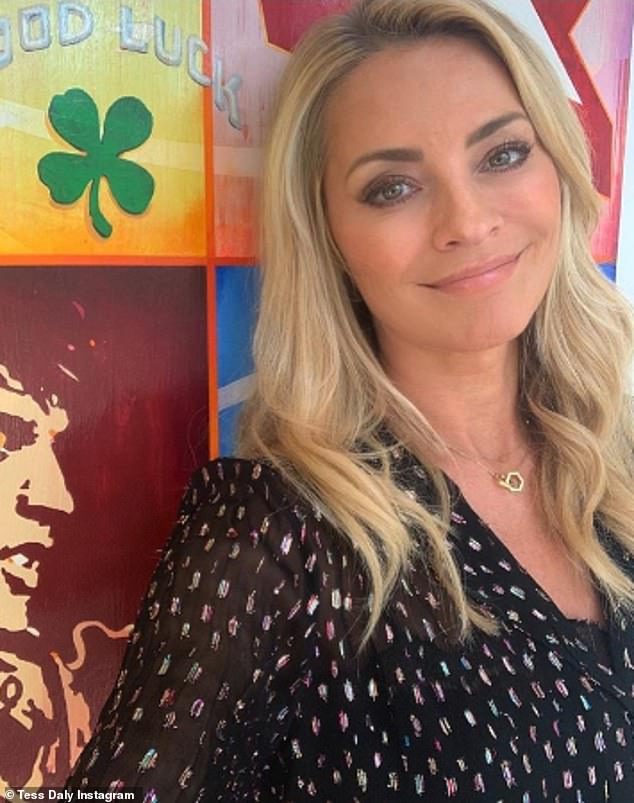 Uncertain times: Tess Daly admitted she was struggling with the unpredictability of lockdown in a candid Instagram post on Friday

‘Just checking in saying hi & wondering how it’s already Friday? Is it just me or does time seem to fly by even MORE quickly when you’ve got so much more of it on your hands?!

‘Still struggling a bit with the disconnection from my usual routines and the unpredictability of everything at the moment; but have also been focusing on using the time productively and positively (yoga, writing, cleansing the home, cleansing my mind with meditation, tutoring, den making, occasional kitchen dancing…) and keeping the faith that brighter days are hopefully just around the corner I feel like we have worked SO hard together to get through this. 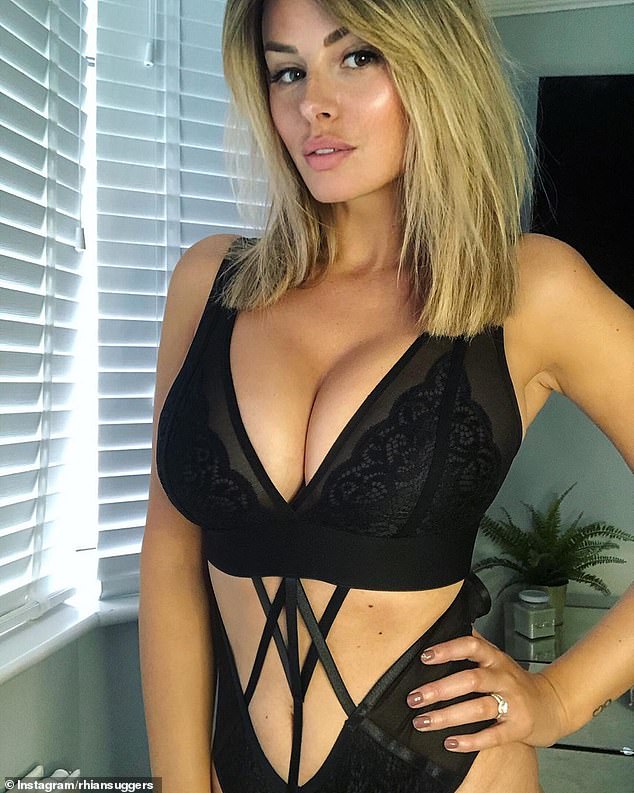 Remorseful: It comes a day after Rhian Sugden expressed her regret over her ‘sexting scandal’ Tess’ husband Vernon Kay 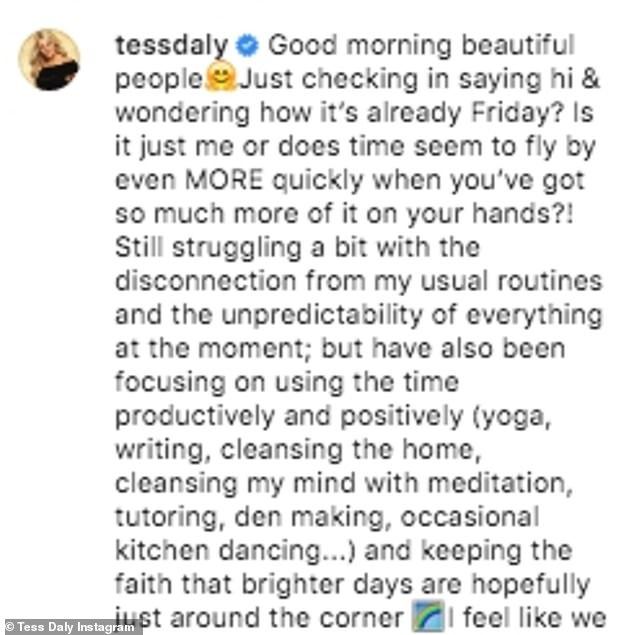 Stay positive: The Strictly host, 51, took to Instagram to share a glamorous selfie and told her followers she is ‘keeping faith that brighter days are round the corner’

‘Really hope you’re all taking good care of yourselves, sending all the love & positivity I have your way.’

Tess’ post comes after Rhian voiced her regrets over her ‘sexting scandal’ with Vernon, 46.

The model, 33, who is currently blazing the promo trail for her new Channel 4 documentary Page 3: The Naked Truth, spoke about the 2010 situation which resulted in a public apology from the presenter, 46, to his wife Tess.

Rhian and Vernon’s daily contact came to light in 2010 after he pursued her on Twitter, text and email for four months, with the blonde bombshell later claiming he also tried to set up a secret liaison with her in a hotel room. 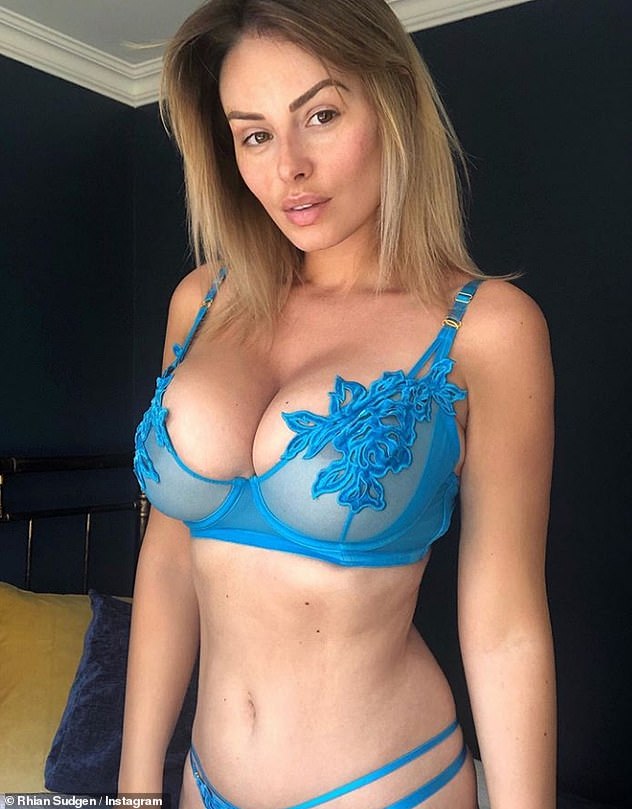 On the up: Rhian said:’Yes I have a few regrets. Obviously, the whole Vernon Kay scandal, that’s what I cry about in the documentary actually. That was a massive regret’

Afterwards, she assured Tess they never met up alone and it was nothing more than a ‘close friendship and flirty messages’. She concluded with offering her ‘sincerest apologises’ and wishing the both of them happiness for the future.

It was then revealed the pair had got back in touch in 2015 with Vernon sending hundreds of texts asking to ‘reconnect’ with the model.

Now, speaking to Joanna Chimonides and Stephen Leng on Access All Areas, she said: ‘Yes I have a few regrets. Obviously, the whole Vernon Kay scandal, that’s what I cry about in the documentary actually. That was a massive regret.’

Aside from her past dramas, she was also detailing her conception journey with her husband Oliver Mellor and how she’s been feeling dejected with the failed round.

Speaking about her IVF, she went on: ‘When the second round failed, I was having a bit of a breakdown about it but now I’ve got a plan in place, I’m not so bothered.

On priorities at the moment, she said: ‘We’ve got a fridge load of injections downstairs but next to it we’ve also got a fridgeful of gin! We can start now…

‘The clinic have said that priority patients can start now and I’m classed as a priority because my egg count is so low, which means I could hit menopause within months and as soon as that hits then it’s too late for me to do it.’ 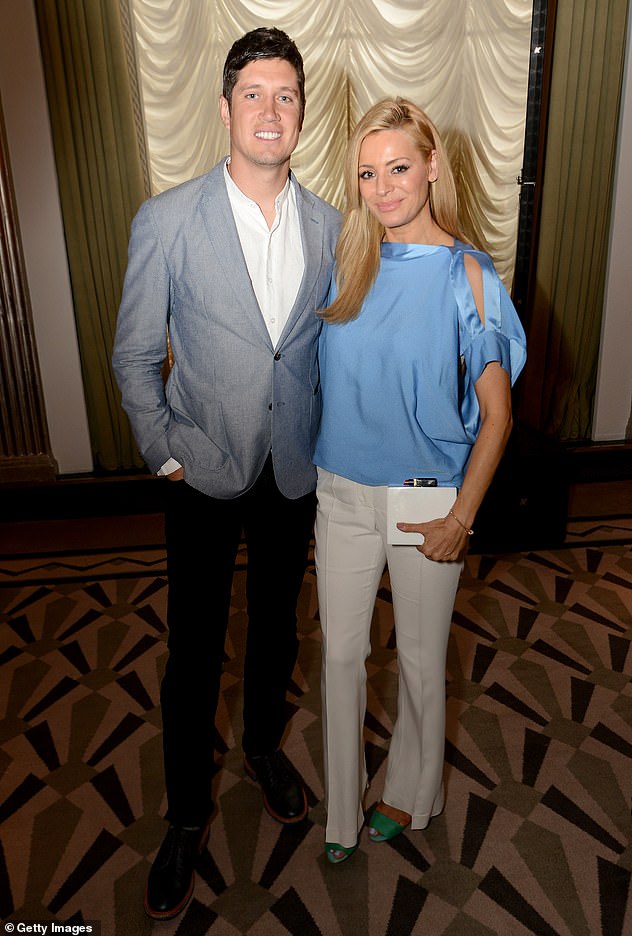 Hard times: Rhian spoke about the 2010 scandal which resulted in a public apology from the funnyman, 46, to his wife Tess Daly, 51 (Vernon and Tess in 2015)