Piers Morgan joins a chic Joan Collins, 87, and his sons for lunch in St Tropez… after jetting out of Britain for the summer

He recently bid farewell to Good Morning Britain for the summer.

And Piers Morgan has wasted no time in reuniting with one of the UK’s biggest stars, as he enjoyed a lunch with Joan Collins at Club 55 in France on Friday.

The presenter, 55, shared a glimpse of the meal on Instagram as he also reunited with his sons Spencer and Stanley in St Tropez. 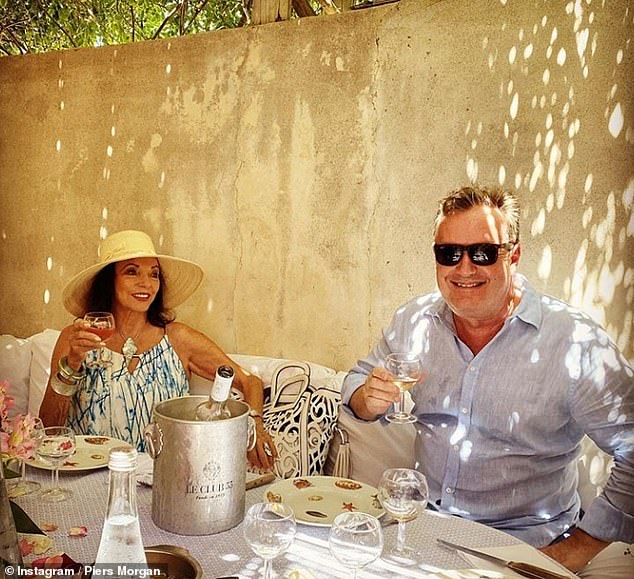 Reunited: Piers Morgan, 55, was reunited with Joan Collins, 87, on Friday as they enjoyed a socially-distanced lunch at Club 55 in St Tropez

Piers shared a glimpse of the socially-distanced lunch he shared with Hollywood superstar Joan – who is a regular guest on GMB.

The former Dynasty star sported a pretty blue and white printed halterneck dress and a wide-brimmed hat as she enjoyed a glass of wine or two.

Piers captioned his post: ‘Don’t you wish someone looked at you the way Dame Joan looks at me?’ 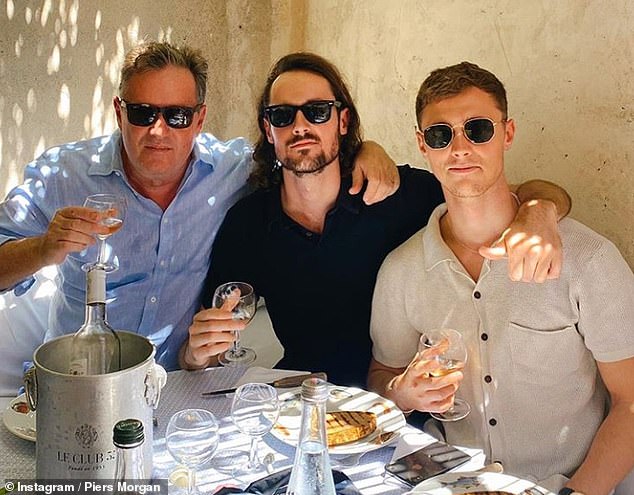 Back together: The broadcaster was also joined by his sons Spencer (centre) and Stanley, for their first meal together in four months

The outspoken broadcaster also shared a snap alongside his two sons as he reunited with them for the first time in over four months.

Piers has certainly been settling into his new summer adode, as on Tuesday he also shared a snap of an enormous plate of paella.

The TV personality has shared a series of snaps since arriving, as he unwinds after spending months grilling cabinet ministers on morning television amid the coronavirus pandemic. 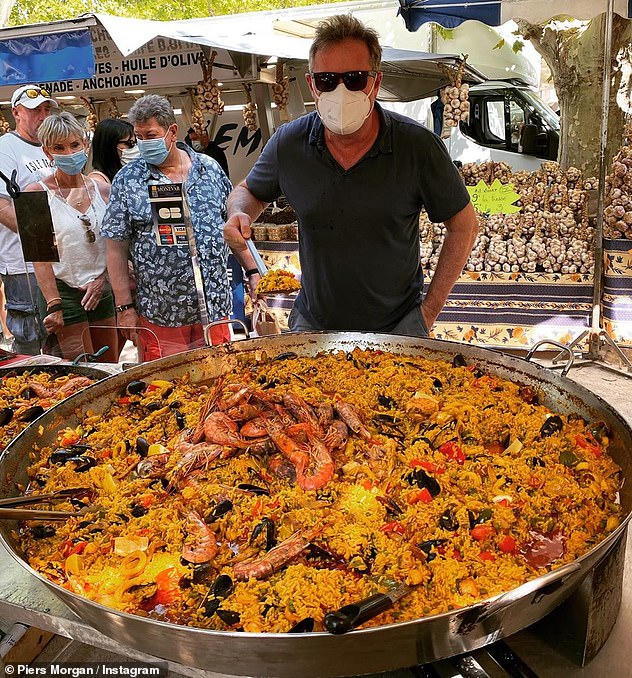 Wow!  Piers has certainly been settling into his new summer adode in France, as on Tuesday he also shared a snap of an enormous plate of paella

On Monday, Piers posted a picture of himself enjoying the ‘perfect summer read’, as he basked in the sunshine while out in his landscaped garden.

Posting a picture of cricketer Bob Willis’ autobiography, he wrote: ‘Perfect summer reading. A fantastic tribute to the late, great Bob Willis, one of my all-time cricketing heroes, edited by his brother David.

He jokingly added: ‘Such a fascinating & entertaining man on and off the cricket pitch. He loved sport, opinions, wine & Bob Dylan – so we had at least three things in common.’ 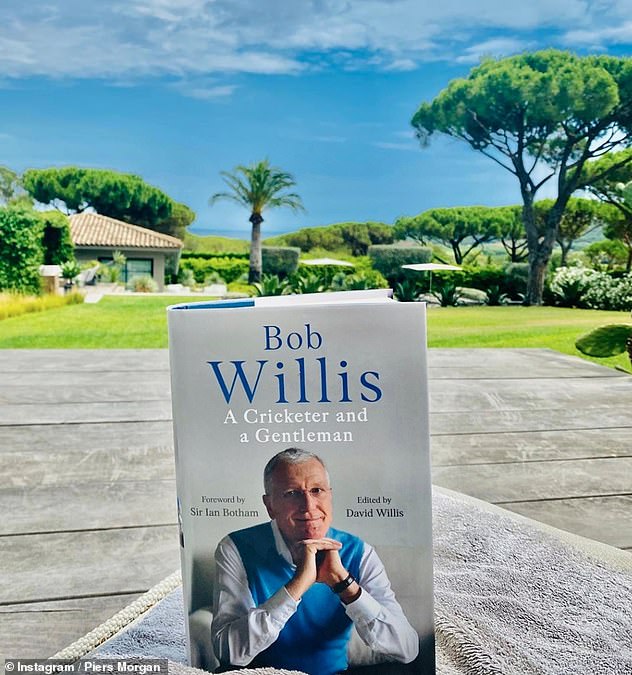 And… relax! On Monday, Piers posted a picture of himself enjoying the ‘perfect summer read’, as he basked in the sunshine while out in his landscaped garden

Shortly after arriving, Piers shared a breathtaking snap of the skyline at sunset from his villa, which the location tagged as St Tropez.

Earlier this week Piers confirmed he’d jetted out of Britain for a summer break, after continuing to host Good Morning Britain during the COVID-19 pandemic.

The broadcast journalist poked fun at himself as he took to social media to share a photograph of himself wearing a face mask whilst sitting aboard a plane at Heathrow airport. 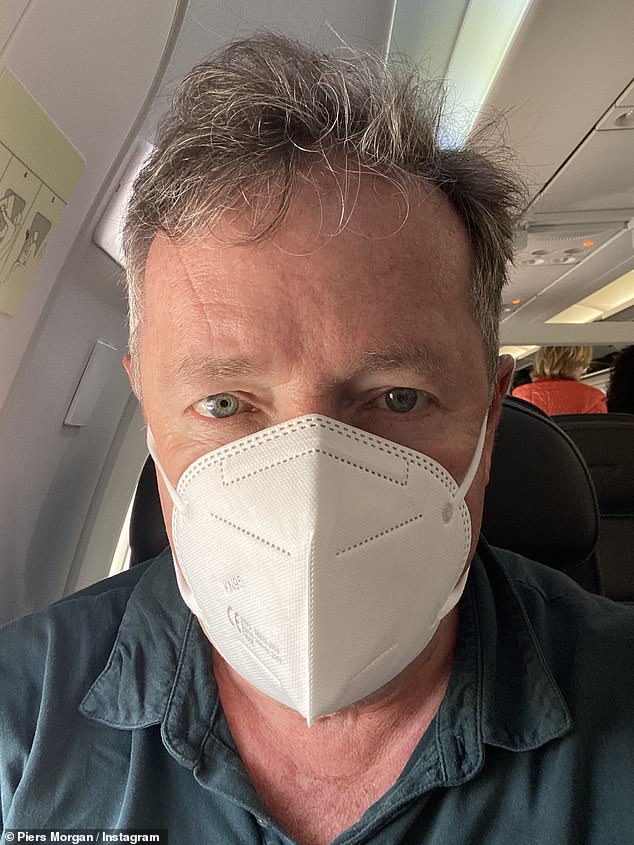 Get me outta here! The broadcast journalist also poked fun at himself as he took to social media to share a photograph of himself wearing a face mask on Sunday

Piers captioned the snap: ‘I’m a washed up, knackered, pathetic excuse for a celebrity – get me outta here. Bye Britain, it’s been… surreal.’

During their final show on Wednesday, Piers and Susanna- who have been playfully nicknamed Shouty and Pouty – shared a montage of their best moments together as they celebrated the past year.

The nickname was first inspired by a troll on Twitter, however Piers has taken ownership of the moniker and claims he ‘loves it’.

Moments before they showed the montage, Piers thanked the team behind the scenes for how hard they have worked on the ‘story of their lifetimes.’ 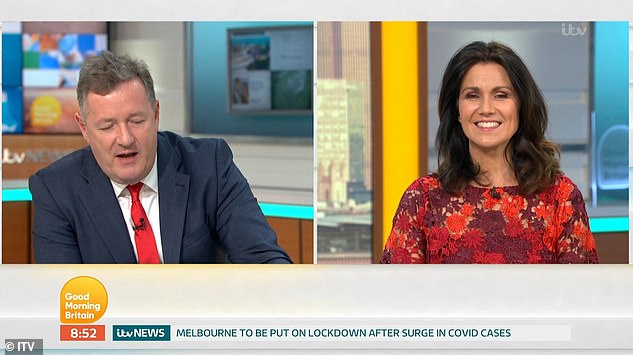 Thank you: Last week Piers and Susanna bid farewell to GMB for the summer and thanked the team behind the scenes for how hard they’ve worked on the ‘story of their lifetimes’

He said: ‘Behind the scenes at GMB there is this enormous team of people all of whom have been working unbelievable hours a lot of self sacrifice…

‘Not seeing families and as we all go off from a break – I think we probably all need a break from each other.’

‘But I want to say a big thank you, I know Susanna will too, to all the GMB behind the scenes. I think we have produced some of the best television journalism that anyone has done in this pandemic, and it’s down to this team behind us.’

Following his sweet words, Piers explained: ‘Our brilliant team upstairs decided to commemorate this – because we thought we look like a couple of hot detectives at the top of our game.’

They then showed some hilarious best bits of the presenting duo which  ended with a clip of Susanna saying: ‘You for once need to pipe down.’ 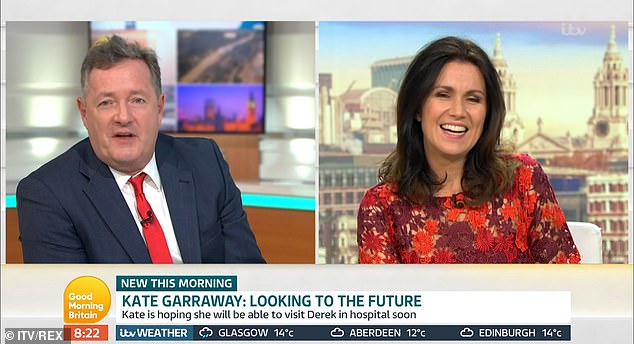 He said: ‘Behind the scenes at GMB there is this enormous team of people all of whom have been working unbelievable hours a lot of self sacrifice…’