Budapest’s amazing Memento Park, which is full of statues of communist leaders from Lenin to Che Guevara

They didn’t chuck communist-era statues in the river in most former Soviet countries after the Iron Curtain fell.

Instead, they stuck them in museums and charged tourists to view them.

Memento Park — officially named A Sentence About Tyranny Park — on the outskirts of Hungarian capital Budapest — is one of the best known. 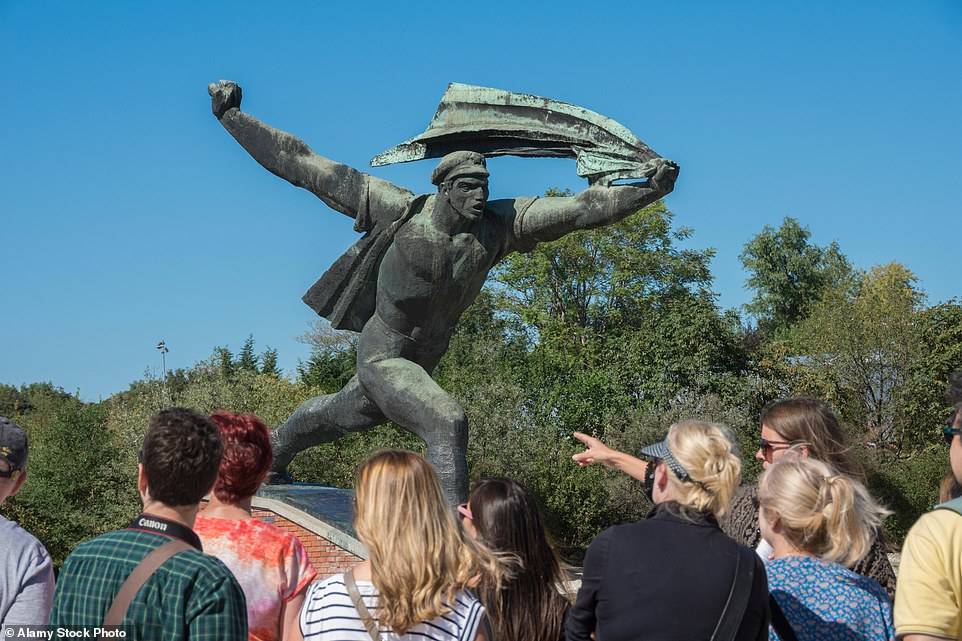 Tourist attraction: A communist-era statue at Memento Park, which is on the outskirts of Budapest 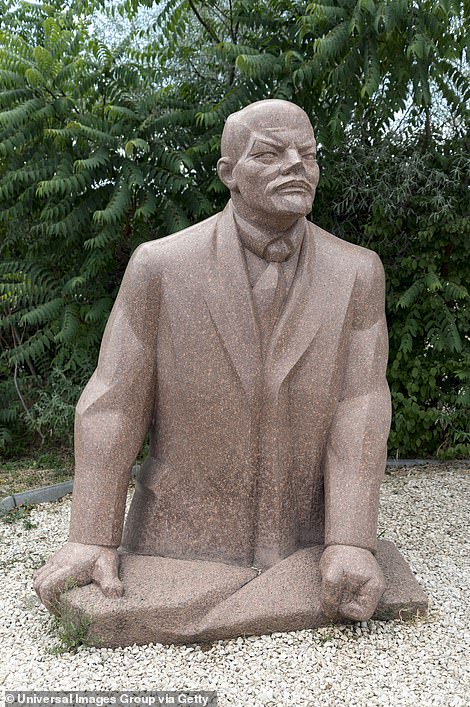 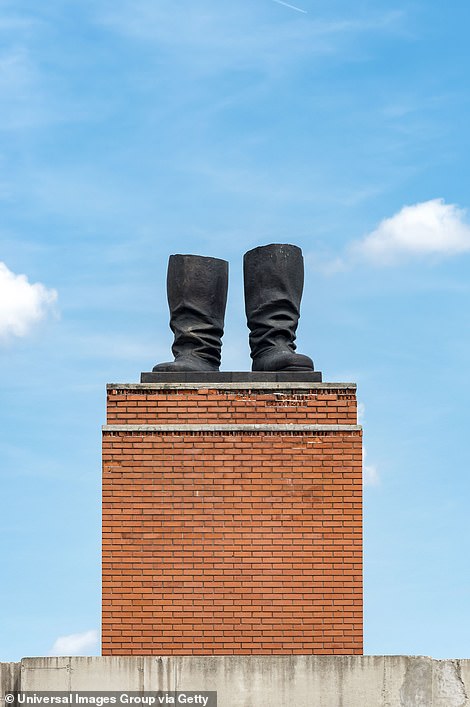 Memento Park has monuments to all of the heroes of communism including Lenin, left. Pictured right is perhaps one of the most eye-catching exhibits – a gigantic pair of black boots standing alone atop a high pedestal. They are all that remains of an 8m (26ft) tall statue of Joseph Stalin that once stood in the centre of Budapest

There are monuments to all the heroes of communism — Lenin, Stalin, Marx, Engels, and Che Guevara, as well as several lesser-known Hungarian dignitaries.

There is also a giant statue of a Red Army soldier, with a machine gun strapped to his chest, proudly holding aloft the Red Flag.

But perhaps most eye-catching is a gigantic pair of black boots standing alone atop a high pedestal.

They are all that remains of an 8m (26ft) tall statue of Joseph Stalin that once stood in the centre of Budapest.

The monument had been erected in December 1951 as a ‘gift’ from the Hungarian people. A plaque attached to it described the Soviet dictator as the country’s leader, teacher and best friend. But an angry mob showed what they thought of that during Hungary’s short-lived October Revolution in 1956.

Chanting ‘Russia Go Home’, they ceremoniously tore it down and smashed it to bits. All that remained were those broken bronze boots — the sole survivors, so to speak. 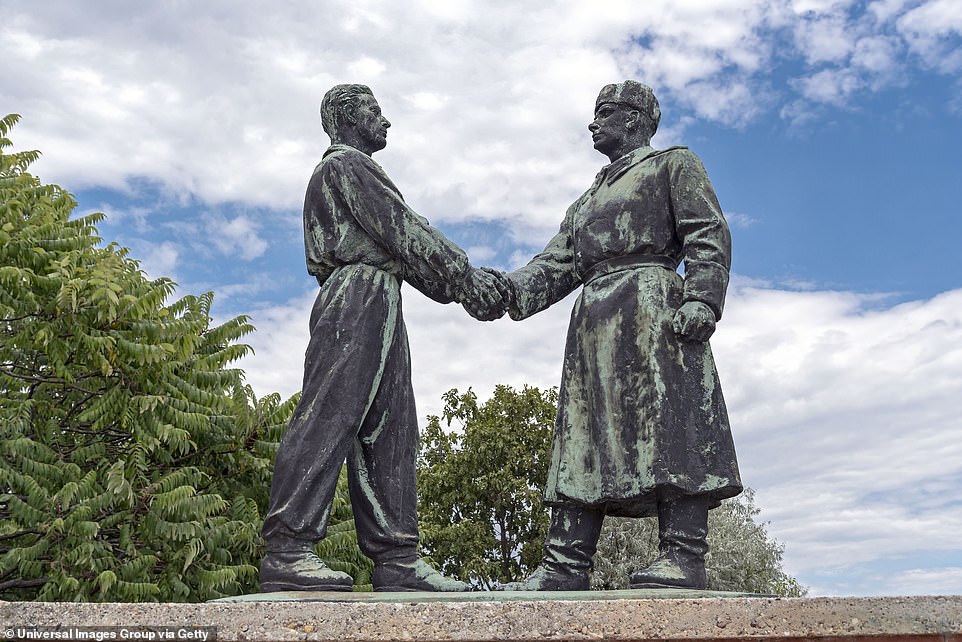 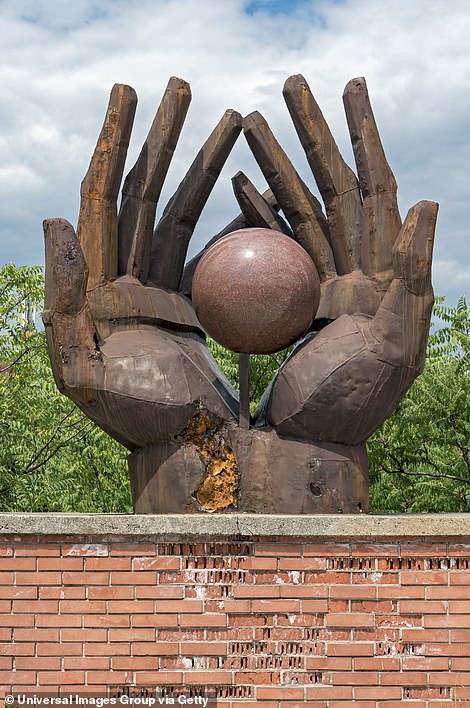 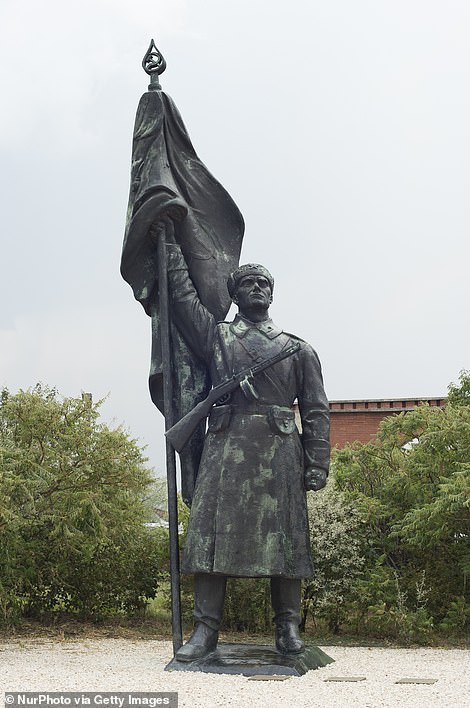 Memento Park is officially named A Sentence About Tyranny Park. Pictured right is one of its giant statues – a Red Army soldier, with a machine gun strapped to his chest, proudly holding aloft the Red Flag

Lithuania, which regained its independence in 1990, has a whole attraction devoted to Soviet-era ideological relics in Grutas Park, 81 miles from its capital Vilnius.

Built like a Siberian gulag prison camp, with guard towers and barbed wire fences, its 86 statues are divided between different sections of the woodland park.

The Totalitarian Sphere features Lenin, Stalin and Marx, while the Terror Sphere includes the founders of Lithuania’s Communist Party — along with notorious Felix Dzerzhinsky, the Bolshevik revolutionary who engineered Russia’s Red Terror.

Neighbouring Estonia has a Soviet Statue Graveyard outside Maarjamae Palace, in capital Tallin, with 15 huge statues, made between 1945 and 1990, including a gigantic head of Lenin.

But it’s not only former communist states that are embarrassed by monuments from a bygone age.

Taiwan ended up with nearly 43,000 statues of President Chiang Kai-shek who fled there with his government from the Chinese mainland in 1949 after being defeated by Mao’s communist forces. 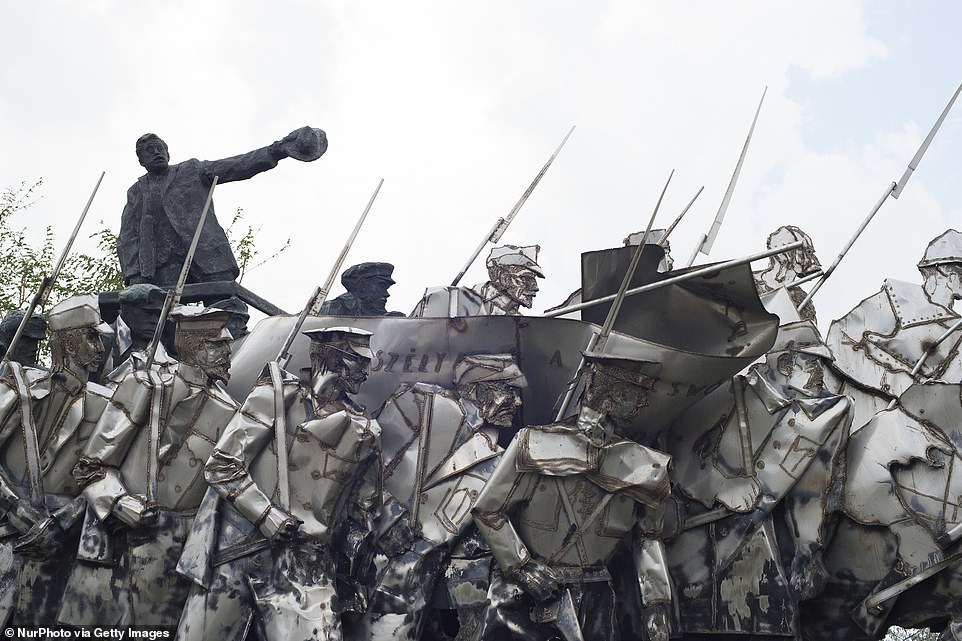 Admission to Memento Park (mementopark.hu) is about £4 and a 50-minute guided tour is £3. Buses and trains run from Budapest centre.

Following his death in 1975, many have been removed, with about 100 being dumped in the Cihu Memorial Sculpture Park close to his mausoleum in Taoyuan City.

Two statues of Cecil Rhodes, the founder of Rhodesia, now Zimbabwe, are reported to be stashed away out of sight in a garden behind the national archives in capital Harare.

And busts of South African apartheid leaders such as H.F. Verwoerd are stored in the bunkers of Pretoria’s Voortrekker Monument.

‘Only democracy can provide an opportunity to think freely about dictatorship. Or about democracy, come to that.

‘These statues are part of the history of Hungary.’

Then, perhaps with a nod at the mobs who now want to tear down so many statues, he adds: ‘Dictatorships chip away at, and plaster over, their past in order to get rid of all memories of previous ages.

‘Democracy is the only regime that is prepared to accept that our past, with all the dead ends, is still ours.

‘We should get to know it, analyse it and think about it.’