‘Gemma after the boys don’t recognise her last name’… Michael Owen’s daughter, 19, becomes a meme sensation after dropping hints about her famous father during her Love Island debut – but no one has a clue she’s related to the retired footballer!

She entered the Love Island villa on Monday evening, hoping for a summer of love.

But Gemma Owen has received backlash from fans already –  who poked fun about her not being recognised as former England striker Michael Owen’s daughter – despite her making a couple of subtle hints.

Fans joked that the 19-year-old beauty was hoping for some attention from her fellow islanders for her famous family, but they failed to recognise the Owen correlation. 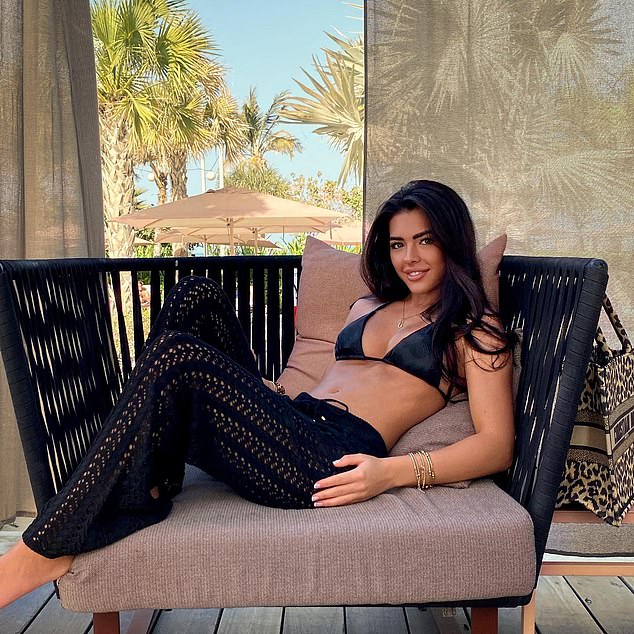 During a discussion about names, Gemma mentioned her surname multiple times but none of her fellow Islanders noticed the connection.

Viewers were convinced Gemma was desperate to reveal her father’s identity with her name drop, while earlier in the episode she also dropped hints about her links to football.

During her first chat with Liam after they were matched by the public vote, international dressage rider Gemma discussed recent graduate Liam’s career aspirations, with the hunk saying he wanted to go into sport performance, before expressing his interest in working with football teams.

After a curious Gemma, who again remained tight-lipped about her famous father, asked if he played at a  ‘decent level’, Liam them questioned: ‘I feel like you’ve been with an ex-footballer or something.’ 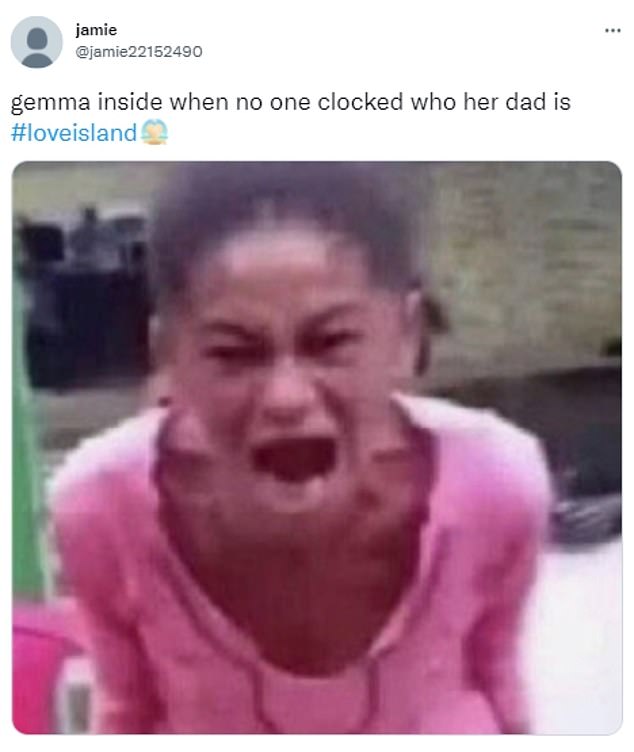 Memes: Fans joked that the 19-year-old beauty was hoping for some attention from her fellow islanders for her famous family, but they failed to recognise the Owen correlation 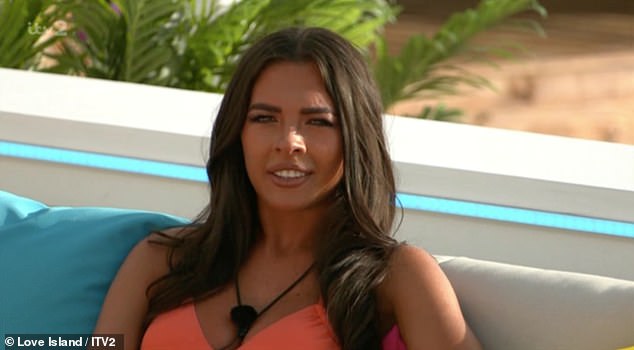 Hints: Earlier in the episode she also dropped hints about her links to football to new beau Liam

The beauty denied having an interest in football, merely stated that she was ‘interested’ in hearing about his aspirations.

She also didn’t waste any time in mentioning her famous father in her video intro. Although she didn’t use his name she said competitiveness ‘is in my blood’ before telling the camera her father ‘has an opinion’ on the men she dates.

The dressage champion said she’s hoping to score in the villa, that would be the goal’ cheekily adding of her puns: ‘see what I did there’.

Posting a slew of memes to Twitter, viewers implied that Gemma was hoping for some more attention as she revealed her last name to the islanders, and was met with silence. 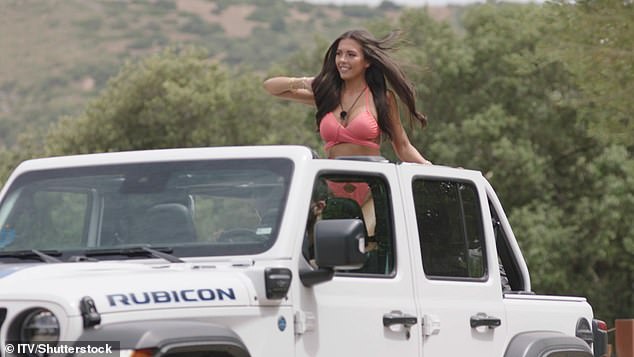 Entitled? She was branded ‘stuck up’ as viewers took to Twitter, jesting about her former England striker dad Michael Owen

Posting a picture of a confused Maura Higgins, one tweeted: ‘Gemma after the boys didn’t recognise her last name’.

And they even predicted her dad Michael’s reaction, joking that he can’t take the pain any longer’.

While others thought her famous roots didn’t serve her well, branding her ‘stuck up’ and ‘rude’.

One wrote: ‘Gemma Owen is either way too young to be on Love Island or is just extremely stuck up. She needs to leave.’ 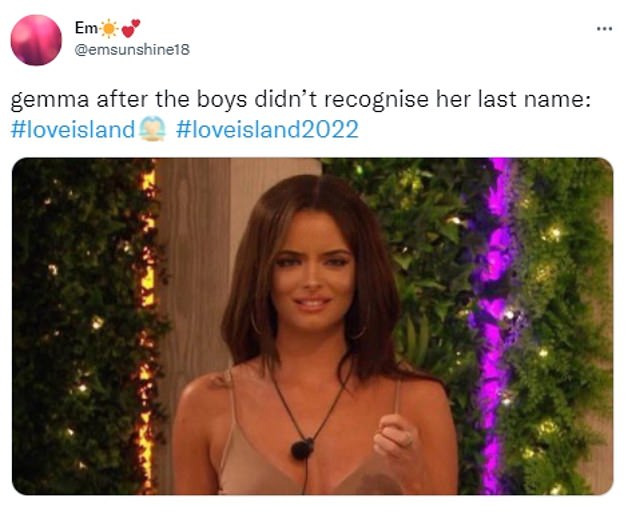 Social media: Posting a slew of memes to Twitter, viewers implied that Gemma was hoping for some more attention as she revealed her last name to the islanders, and received no reaction

Unhappy: While others thought her famous roots didn’t serve her well, branding her ‘stuck up’ and ‘rude’

Gemma’s dad Michael retired from the pitch in 2013 after a 17-year career which saw him play for England as well as at club level for the likes of Liverpool, Real Madid and Manchester United.

Despite his illustrious career, many of the Love Islanders may not be too familiar with the ex footballer as most are in the early twenties and would have been children when he was at the height of his career in the early noughties.

Gemma previously insisted she wouldn’t be ‘bragging’ about her dad’s famous career to potential suitors, even if they’re die-hard football fans. 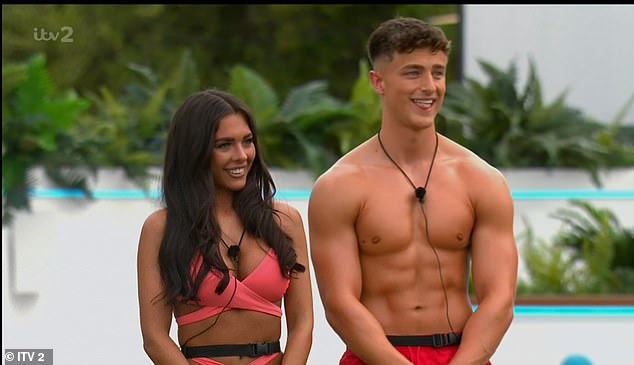 Keeping mum: Gemma previously insisted she wouldn’t be ‘bragging’ about her dad’s famous career to potential suitors, even if they’re die-hard football fans 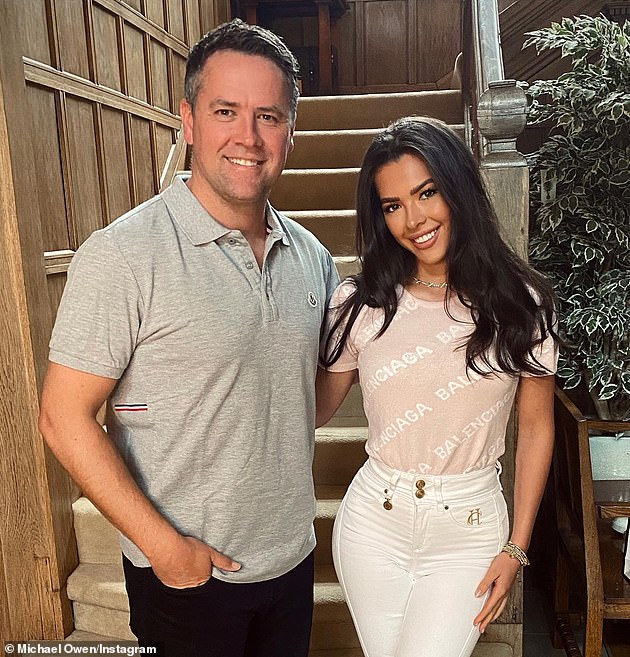 Proud dad: Michael previously described Gemma as a ‘sensible girl’, explaining: ‘I’ve got no doubts that she’ll make us all proud’ 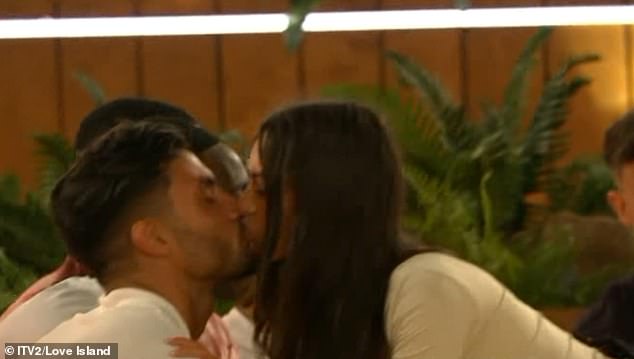 First kiss: Gemma coupled up with Liam Llewelyn in the show’s first episode, but planted a kiss on hunky bombshell Davide Sanclimenti during a saucy game of dares

She said: ‘I don’t think I’m going to go in there and say ‘my dad was a footballer’ because I am not really that type of person but if they ask me what my parents do then I won’t keep it a secret, I’ll be honest but I won’t go in there bragging about it. I’ll only address it if people ask me.’

Gemma seemingly got off to a frosty start on Monday night, as she coupled up with Liam Llewelyn in the show’s first episode, but struggled to hit it off after being paired up the public vote.

And her head was seemingly turned already, planting a kiss on hunky bombshell Davide Sanclimenti during a saucy game of dares.

As the island girls settled down for a post-dares debrief, Gemma admitted she did feel there was ‘something missing’ in Liam, and she was most ‘physically attracted’ to Davide.

As the two got to know each other after fans voted for them to be coupled up together, things became slightly tense as Gemma branded the Masters student a ‘d**k’ following his condescending comment about strength and conditioning.