EXCLUSIVE: Liam Payne suffers a nose bleed as he leaves a night out at 3am with a mystery brunette after split from fiancée

Liam Payne suffered a nose bleed as he headed home from a night out in the early hours of Monday morning.

The former One Direction singer, 28, suffered as he left the Soccer Aid afterparty at the swanky Nobu Hotel in London’s Shoreditch at 3am after he was seen play-fighting with pals earlier on in the night.

Liam, who looked a little gaunt, had a mystery brunette hidden away in the back seat of his car who kept her head down to avoid being seen.

The outing comes just a fortnight after Liam had a fling with model Aliana Mawla, 24, which took place just weeks after he split from fiancée Maya Henry, 21.

The on/off couple called off their relationship for good in May. They had previously called off their engagement in 2021 but rekindled their romance just two months later and were going strong until they hit the rocks again this year. 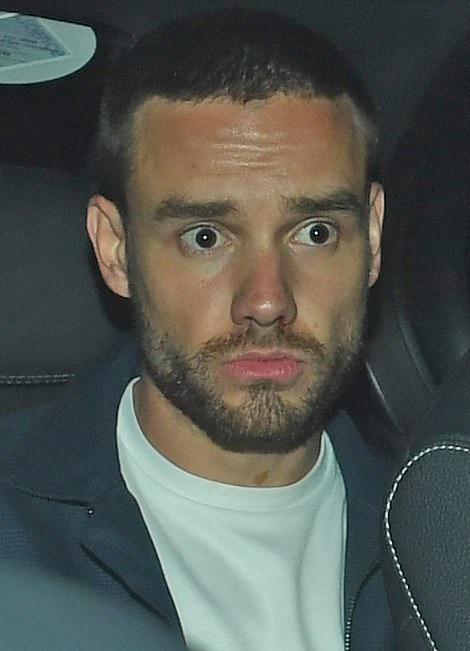 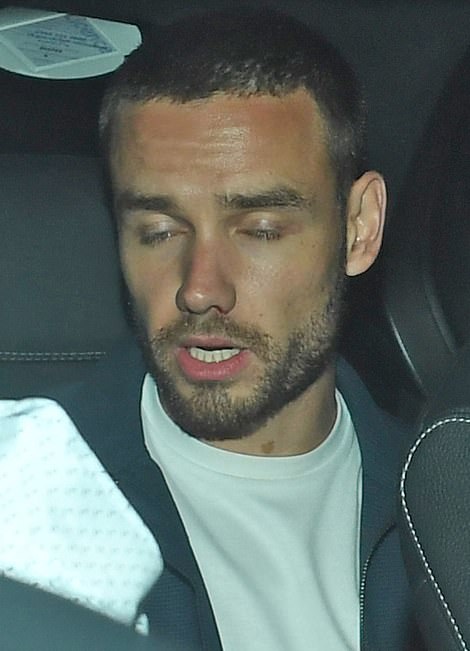 Ouch: Liam Payne suffered a nose bleed as he headed home from a night out in the early hours of Monday morning. The former One Direction singer, 28, suffered as he left the Soccer Aid afterparty at the swanky Nobu Hotel in Shoreditch at 3am 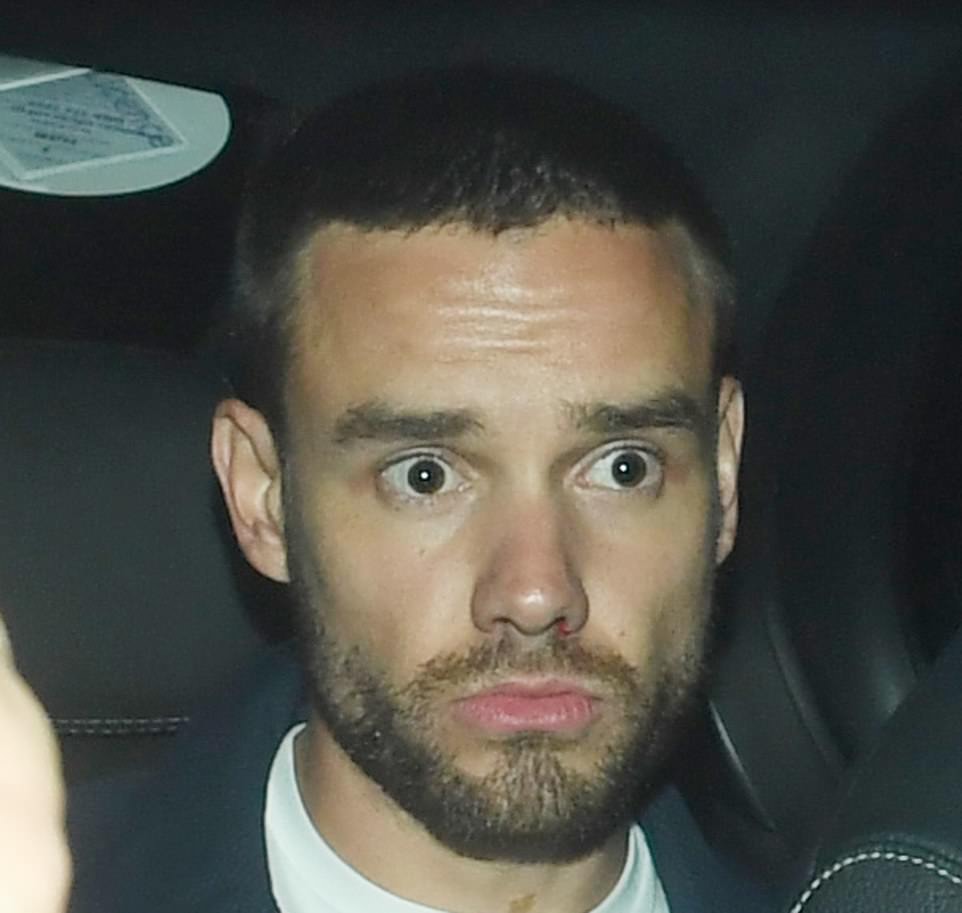 Night out: Earlier on Liam took part in the star-studded Soccer Aid game which raises money for charity and had been seen play-fighting with pals earlier on in the evening

It had been reported that Liam had split from Maya to spend more time with his son, Bear, four, whom he shares with ex Cheryl, 39.

The former couple welcomed Bear in 2017 but split the following year following a two and a half year romance.

Speaking on Logan Paul’s Impaulsive podcast, he admitted he originally struggled with becoming a father at the tender age of 23, but that it helped tame his reckless behaviour.

The singer, who has detailed his addiction and mental health issues, said he would ‘listen to the nasty beastie in his head’ and would often take advantage of the hotel mini bar and trash his room during his time in the band.

He explained: ‘I spent a lot of my life pretty f***ed up. Whatever the nasty beastie in my head wants to tell me, and that bit is hard to deal with.

‘Now I’m happy with who I am and the person I have grown into. The biggest thing is being asked, ‘What do you enjoy in life?’ And I don’t really know as I just chose to enjoy the mini bar and trash up the hotel room. That was it.’ 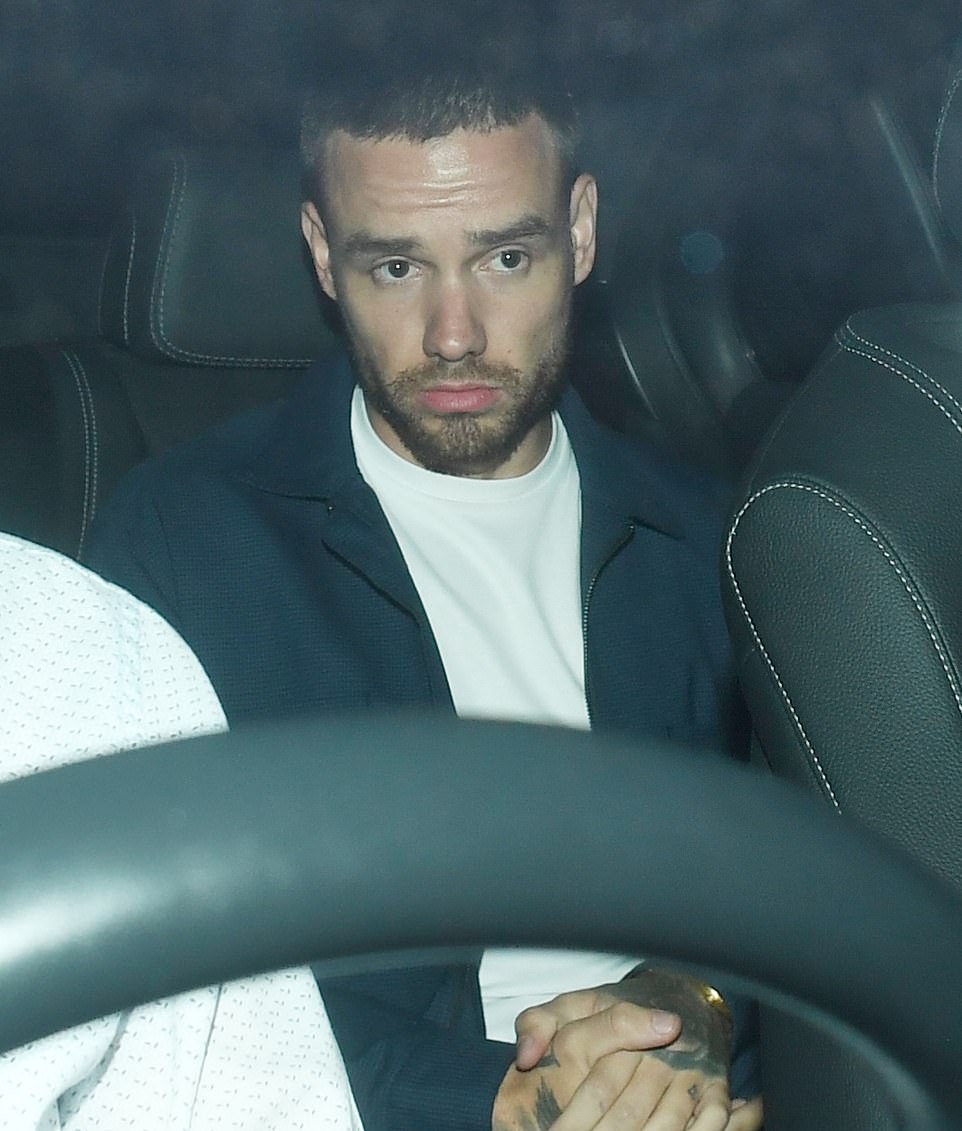 Low-key: Liam looked casual in a plain white T-shirt that he paired with a navy bomber jacket and gold watch 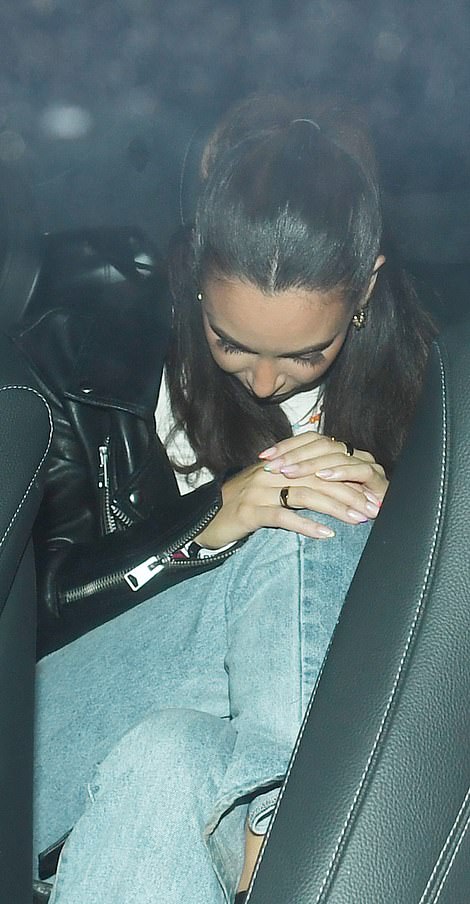 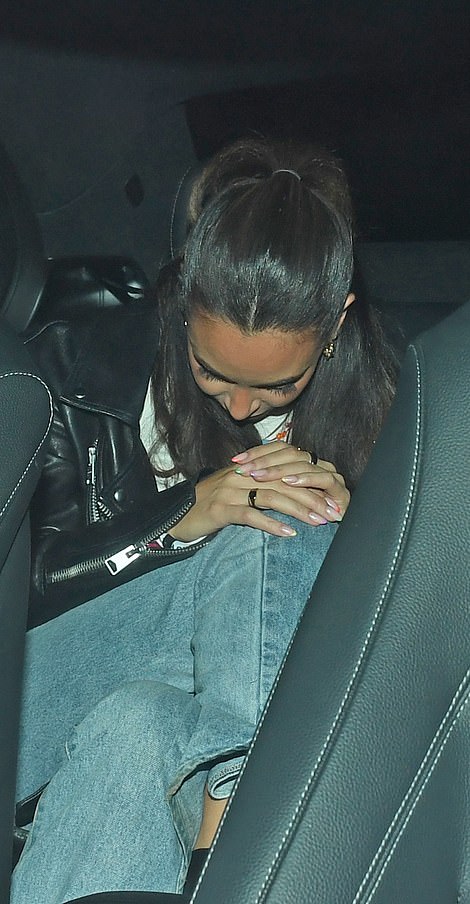 Hidden away: Liam, had a mystery brunette hidden away in the back seat of his car who kept her head down to avoid being seen

Liam previously admitted that during his time in One Direction he struggled with addiction and mental health issues that he kept secret until last year.

The group, formed of Liam, Harry Styles, Louis Tomlinson, Niall Horan and Zayn Malik was formed on The X Factor in 2010, and they went on to become the biggest boyband in the world before their split in 2015.

Yet Liam struggled to stay sober on tour, confessing: ‘There were a few pictures of me on a boat and I was all bloated out and I call it my pills-and-booze face.

‘My face was 10 times bigger than it is now. The problem was, the best way to secure us was to lock us in our rooms, and what is in the room? A mini-bar.

‘So I had a party-for-one that seemed to carry on for years. It was wild but the only way you could get frustration out.’

Liam went on to reveal that he slipped back into bad habits during lockdown, and became reliant on alcohol, which led to him putting on weight.

Speaking on The Diary Of A CEO podcast last year he said he needed to ‘work on himself’ – and that he had been sober from alcohol for over a month. 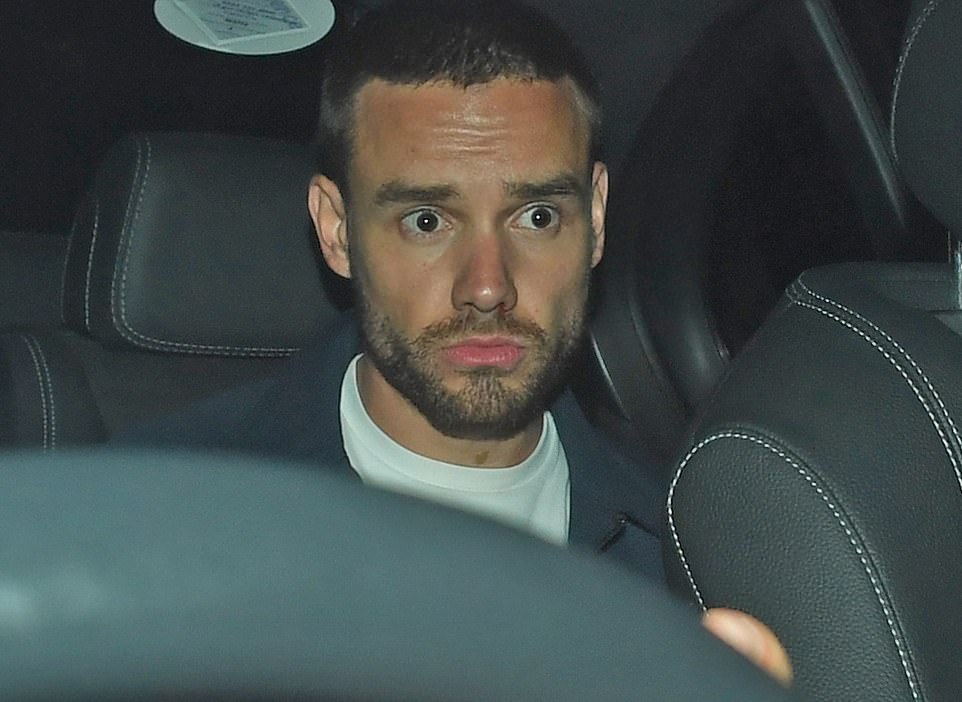 Sleepy? Liam looked ready for bed as the clock struck 3am after his night out at the Soccer Aid afterparty

He said: ‘I feel like more than anything at this point, I’m more disappointed in myself that I keep on hurting people.

‘That annoys me. I’ve just not been very good at relationships. And I know what my pattern of things is with relationships at this point.

‘I’m just not very good at them so I just need to work on myself before I put myself on to somebody else.’

Liam also said he had been sober for a month at the time of his interview.

He has admitted to having drinks recently and said in May that he was under the influence of alcohol while presenting on an Oscars show. 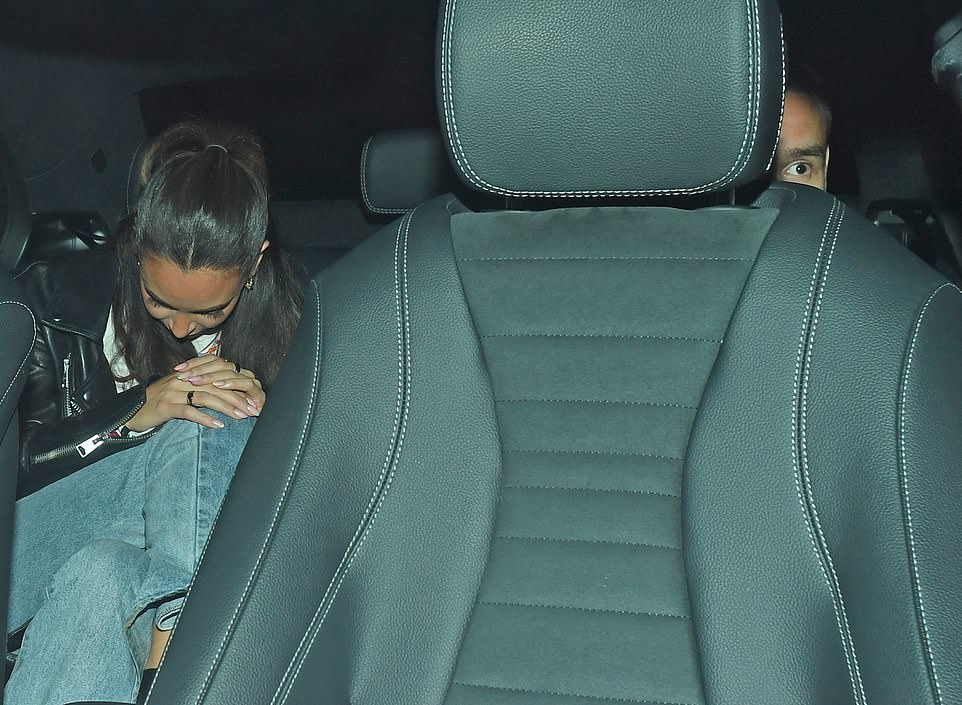 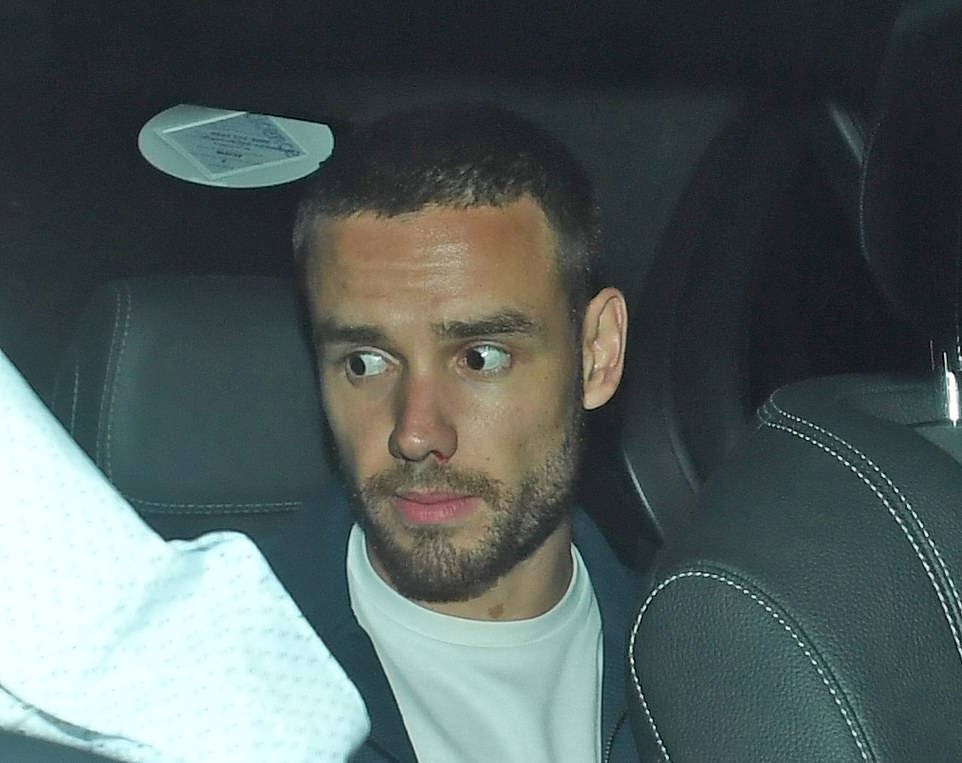 Something caught your eye? Liam looked a tad alarmed by something going on in the vehicle

Liam was forced to explain why his accent appeared to have completely changed in May when he was interviewed about the infamous Will Smith slap.

Liam blamed ‘a lot of drink’ for the bizarre Irish-American accent had during a Good Morning Britain interview which went viral for all the wrong reasons.

He described himself as a ‘social chameleon’ and called his accent is ‘ever-changing’ depending on who he is around, before insisting he is normally ‘good at accents’.

Addressing his interview in an Instagram Live video, Liam joked: ‘I’m good at accents, I pride myself on them! I just wish sometimes I could do my own.

‘No I mean, what can I say about that really? It was quite funny.’ 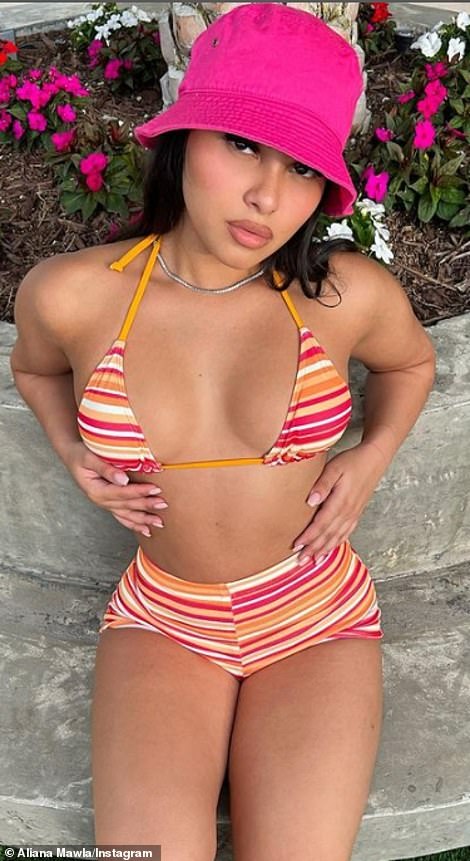 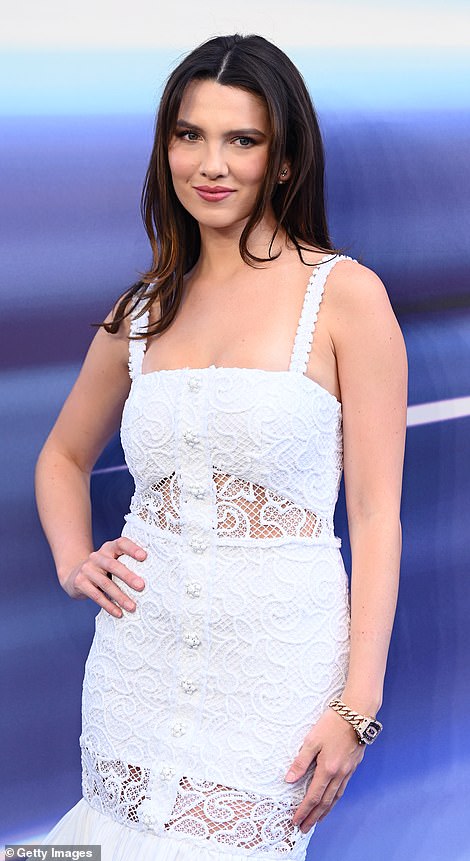 Former flames: The outing comes just a fortnight after Liam had a fling with model Aliana Mawla, 24, (left) which took place just weeks after he split from fiancée Maya Henry, 21

The former One Direction star admitted that he had told the presenter not to ask him any difficult questions because he ‘had a lot to drink’, as his friends could be heard laughing in the background.

‘Now the very first question the man asked me was, “What do you think about Will Smith?”.

‘Now can you imagine, imagine being put on the spot in that moment and knowing, “I can’t say anything wrong because I’m gonna upset someone” and I just did the best I could.’

Liam went on to say he has listened back to his interview and said he ‘stands by’ his comments – which were slammed as ‘rambling – adding: ‘I’m just sorry it came out in so many accents! I’m not even sure if it’s an accent I can do.’ 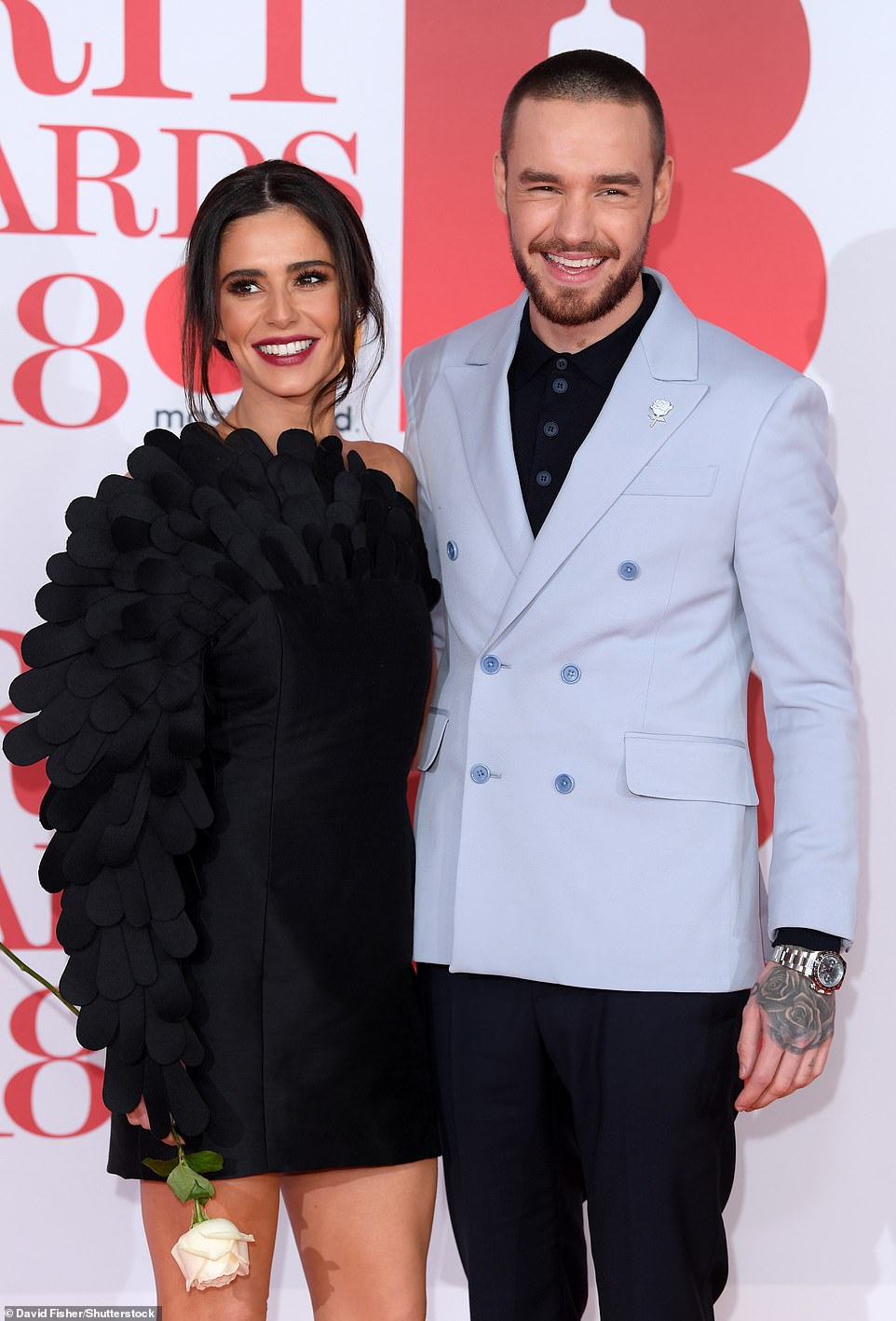 Case of the ex: It had been reported that Liam had split from Maya to spend more time with his son, Bear, four, whom he shares with ex Cheryl, 39. The couple split in 2018 following year following a two and a half year romance (pictured 2018) 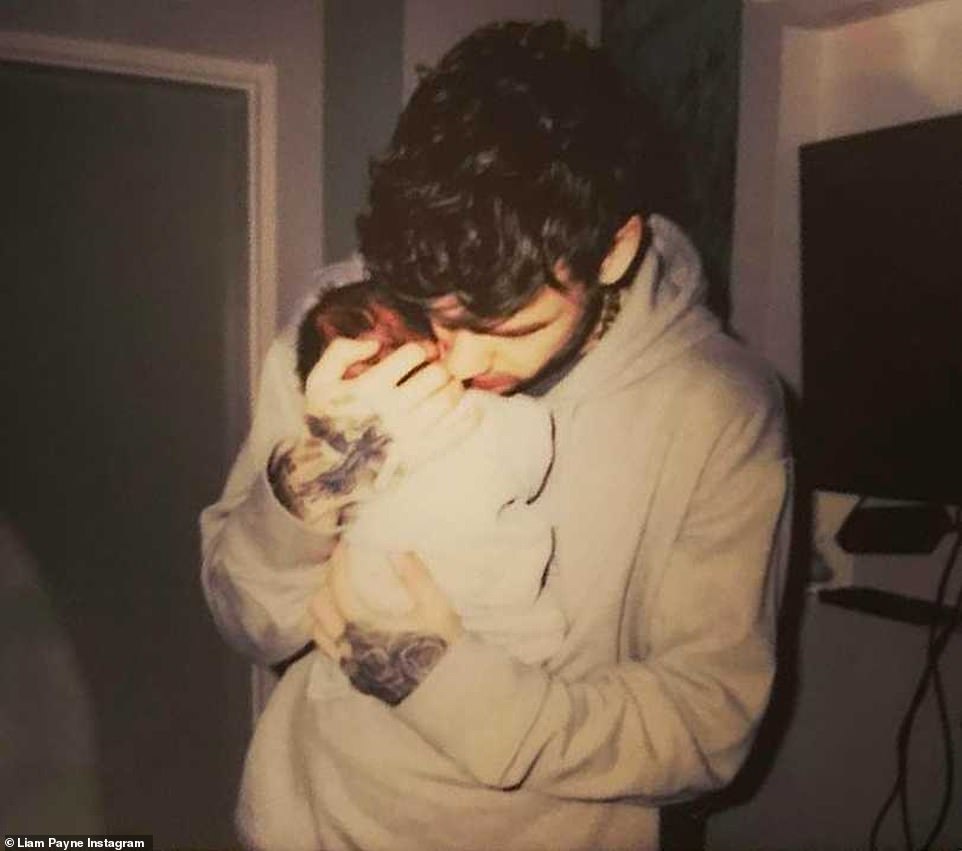 Struggles: Liam recently admitted he originally struggled with becoming a father at the tender age of 23, but that it helped tame his reckless behaviour

He then said people only need to watch back his X Factor audition for proof of his ‘ever-changing’, where he claims you couldn’t even tell he was from Birmingham.

‘I didn’t know the Birmingham accent was going to become really cool because of Peaky Blinders, but I don’t sound like I’m from Birmingham really [in the audition],’ he said.

Meanwhile, Liam recently came under fire from fans after he labelled former One Direction bandmate Zayn Malik a ‘d*ck’. 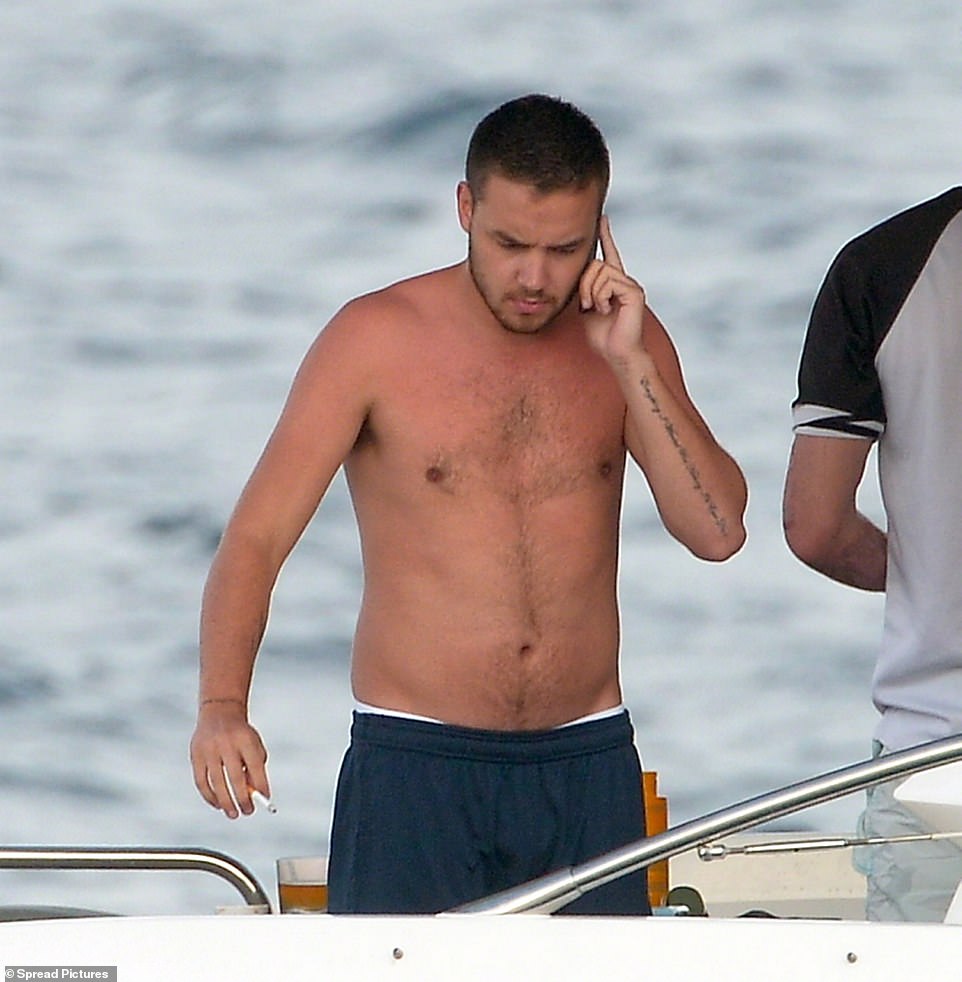 Bloated out: Liam revealed last year he struggled to stay sober in One Direction, confessing: ‘ There were a few pictures of me on a boat and I was all bloated out and I call it my pills-and-booze face’ (pictured in 2014) 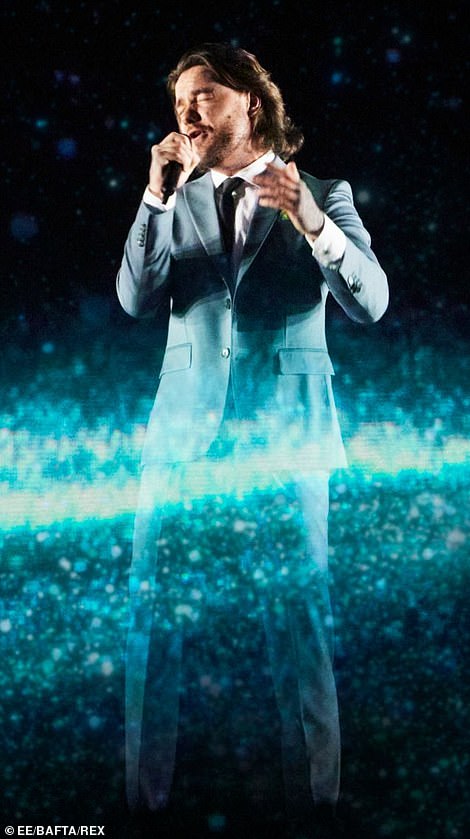 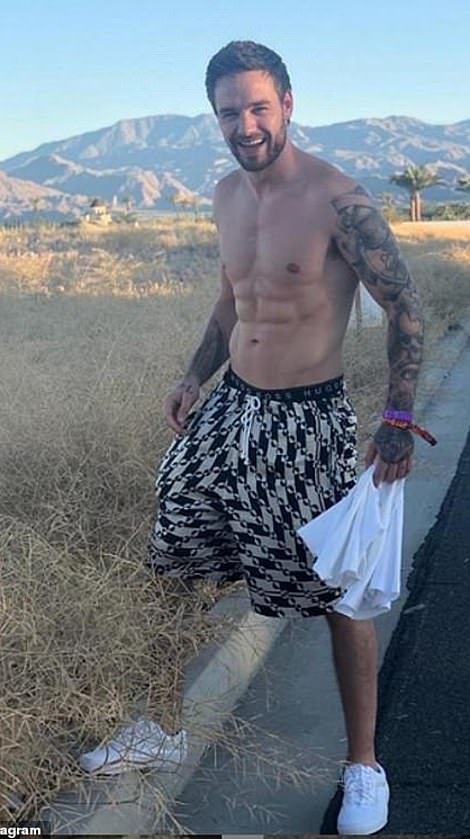 Liam spoke about his lockdown weight gain saying: ‘I did one performance on TV with the BAFTAs (left) and I was disappointed with myself. I didn’t look how I wanted to look’ (pictured right in 2019)

Liam and Logan discussed Zayn’s headline-making online feud with Logan’s brother Jake Paul in 2020, which ended with Zayn’s then-girlfriend Gigi Hadid slamming Jake as ‘irrelevant’ and defending her beau as ‘a respectful king’.

Liam gave his thoughts on the drama, saying: ‘She tweeted something about get yourself a respectful man or something. That one didn’t age very well.’

The comment was interpreted by fans as a reference to the allegation that Gigi’s mother Yolanda Hadid made last year, that Zayn had shoved her into a dresser and called her a ‘f***ing Dutch slut’.

Liam continued to talk about Zayn, saying there were ‘many reasons why I dislike Zayn’ but that he will ‘always be on his side’ because of Zayn’s alleged tough upbringing. 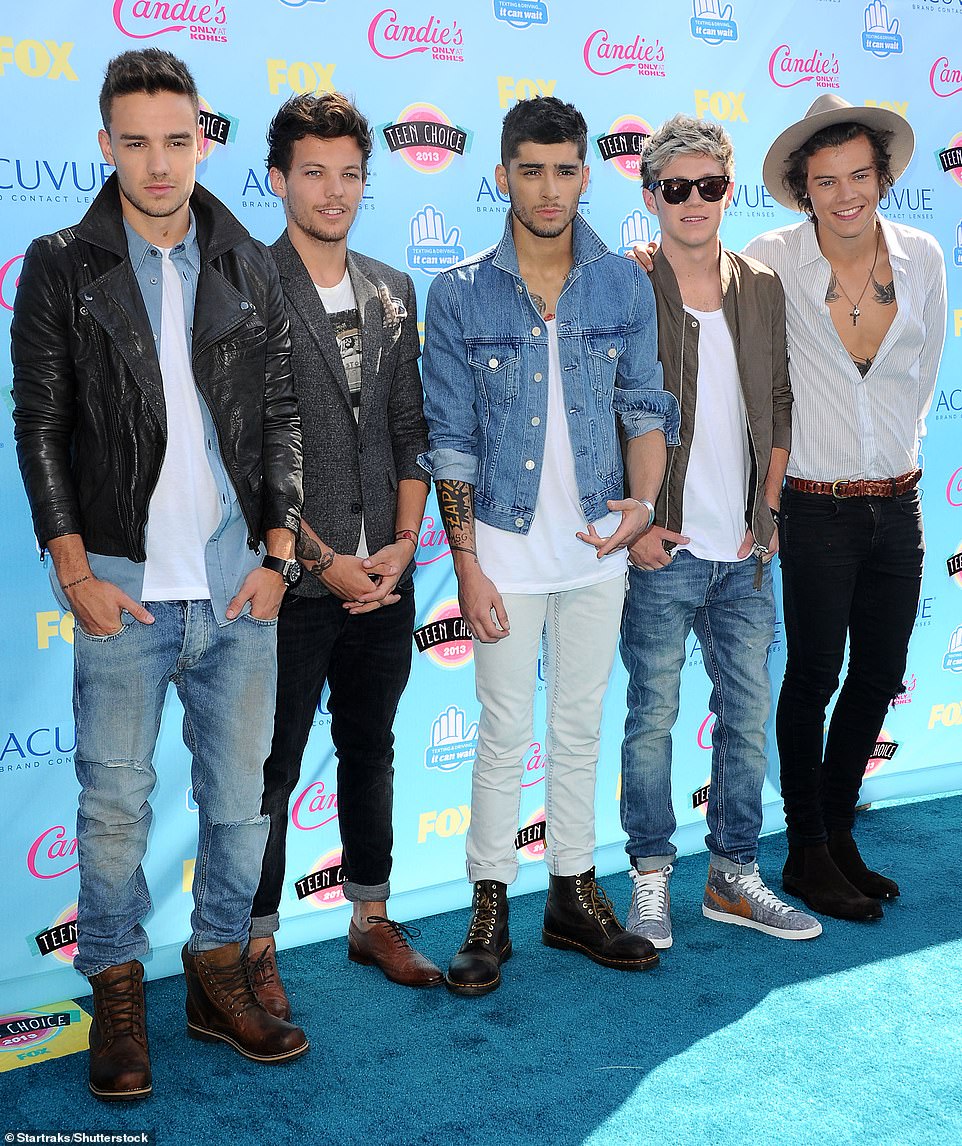 Finding fame: One Direction – Liam, Louis Tomlinson, Zayn Malik, Niall Horan and Harry Styles – formed on The X Factor in 2010, and they went on to become the biggest boyband in the world

‘If I had had to go through what he went through, through his growth and whatever else. You know are your parents very supportive?

‘My parents are overly supportive to the point where it’s annoying at times and they don’t even mind me saying that. And Zayn had a different upbringing in that sense.’

He continued: ‘You can always look at the man for where he is and say, “Oh, yeah, whatever that guy’s a d*ck.” Right? But at the end of the day, once you understand what he’s been through to get to that point, and also whether or not he even wanted to be there…

‘I’m so misunderstood by myself more than anyone, like I don’t know what I’m doing or why I’m here. It’s like, I can’t sit here and d*ck on him because of whatever.’

Liam later apologised for his remarks, saying he failed to articulate himself properly.

He said: ‘Guys – I wouldn’t normally comment on this stuff but when its your family it’s hard to let it slide.

‘They mentioned a specific incident involving Zayn which I responded to – but listening back maybe I didn’t articulate myself as well as I could have.

‘I was saying that there will always be things we disagree on but that I will always, always be on his side. That’s family. Zayn is my brother and I will stand by him forever.’ 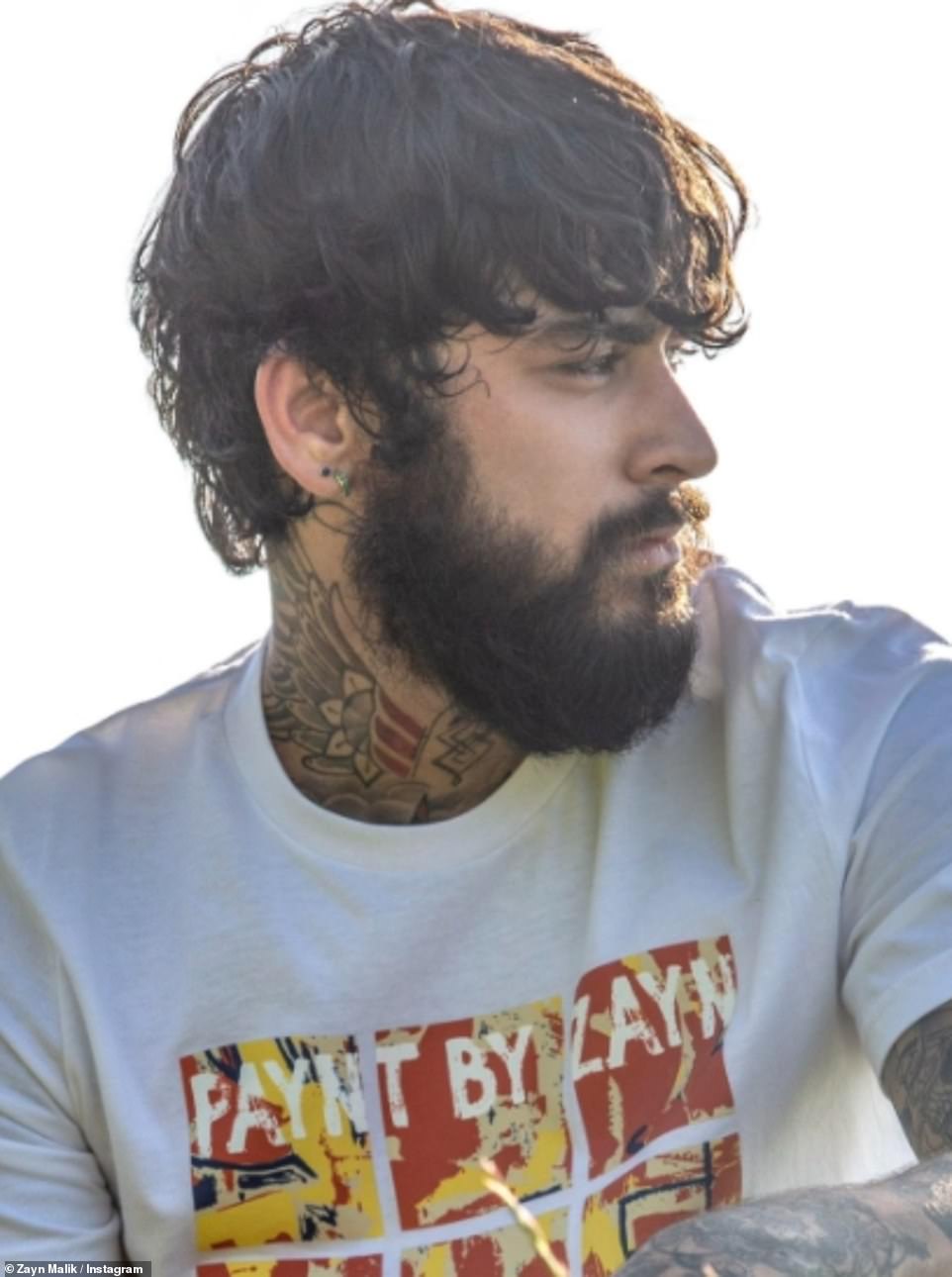 Backlash: Liam recently came under fire from fans after he labelled former One Direction bandmate Zayn Malik a ‘d**k’