‘He couldn’t hold it in!’ LeBron James divides fans after appearing to stifle a laugh during Macy Gray’s throaty rendition of the National Anthem at NBA All-Star Game

LeBron James divided fans on Sunday evening after appearing to stifle a laugh while singer Macy Gray’s performed the National Anthem at the NBA All-Star Game in Cleveland.

The NBA superstar, 37, was seen on camera seemingly restraining himself from laughing while Gray, a native of Canton, Ohio, delivered a slowed-down rendition of The Star-Spangled Banner in her trademark raspy voice.

The Los Angeles Lakers star was one of many celebrities cameras focused on for reaction shots to the 54-year-old Grammy-winner’s performance at the Rocket Mortgage FieldHouse. 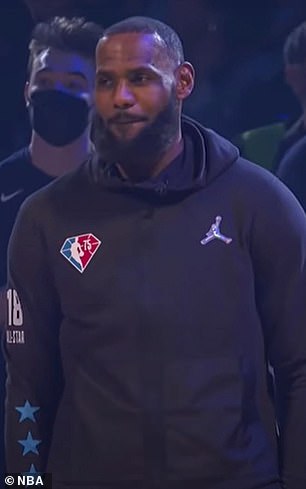 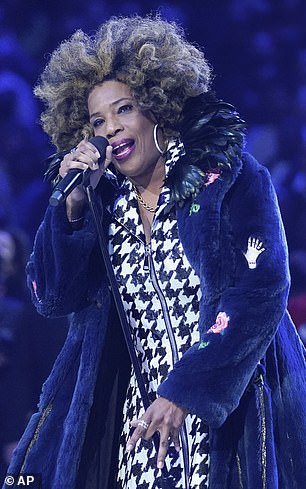 The latest: LeBron James, 37, made headlines as he smirked during Macy Gray’s rendition of the National Anthem at the NBA All-Star Game at the Rocket Mortgage FieldHouse in Cleveland on Sunday

Kareem Abdul-Jabbar, Bill Murray and Steph Curry were also seen on camera during Gray’s outing, though none seemed to register the same humorous response as James.

A number of Twitter users pointed out that James had been laughing during Gray’s performance, with GIFs of the NBA legend, whose team prevailed in a 163-160 victory over Kevin Durant’s team.

One user shared a GIF of Leslie David Baker’s The Office character Stanley Hudson laughing, while NBA reporter Mark Medina noted that the superstar ‘held back laughter’ amid her performance.

One user recalled Gray’s cameo appearance in the film Training Day, who played an upset woman whose home had been illegally raided. 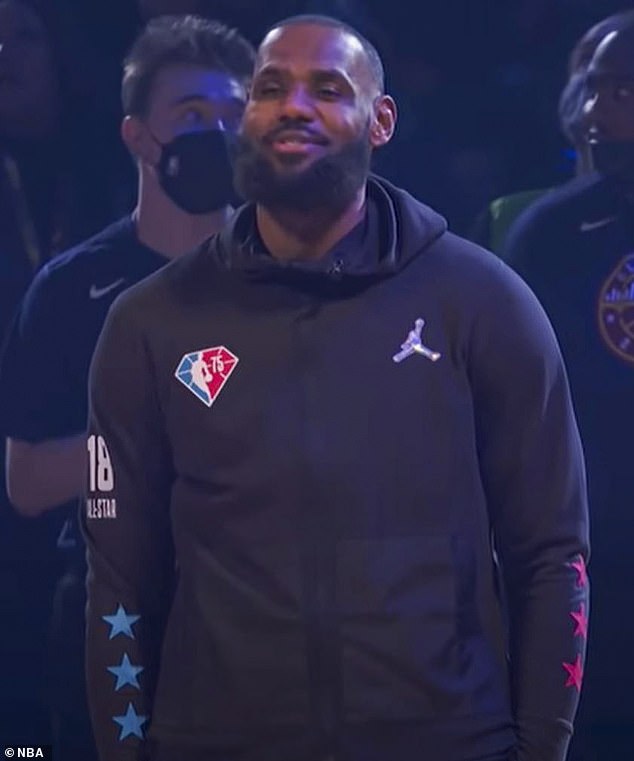 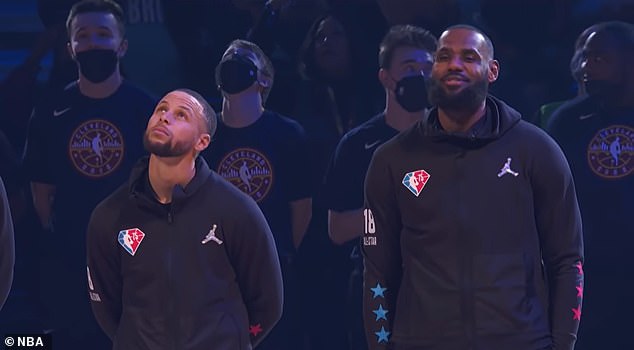 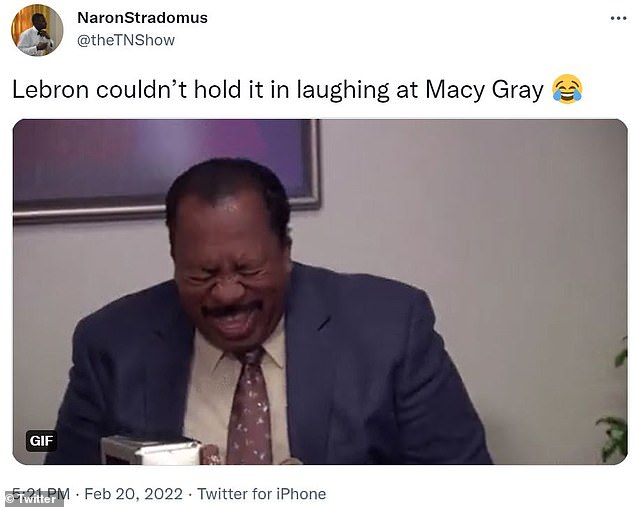 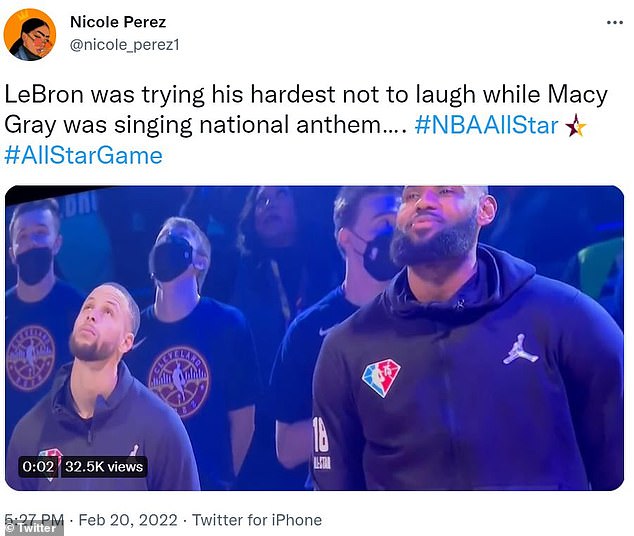 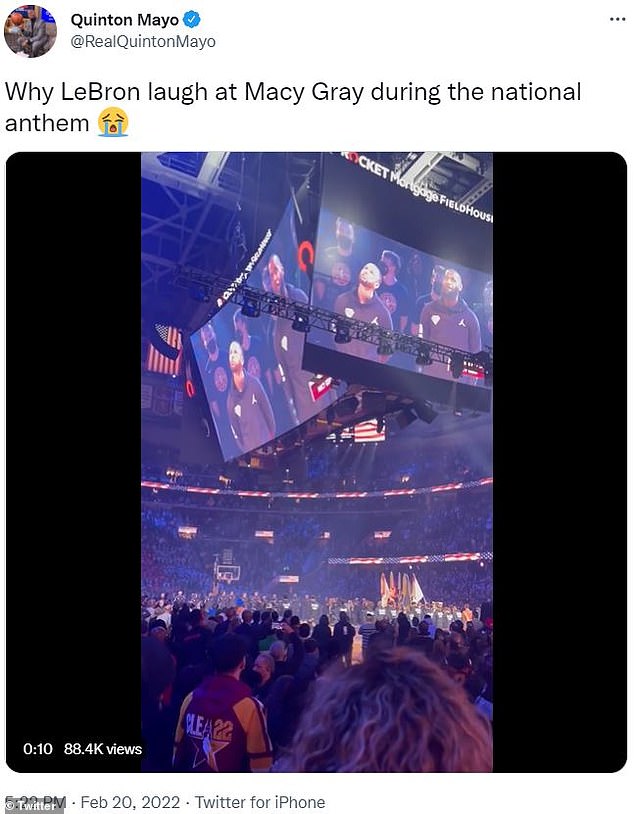 Some Twitter users seemed annoyed over James’ reaction and the attention surrounding it.

‘Lebron James is supposed to protect black women,’ one user wrote. ‘He shouldn’t been an adult and kept a straight face while Macy Gray was performing. People felt comfortable to laugh at her style of singing because the camera cut to Lebron holding in his laughter smh.’

Another called him ‘a joke,’ ‘disgusting’ and  ‘disrespectful,’ noting his past controversy involving China, adding the hashtag #ChinaKing.

Said one user: ‘LeBron is actually very weird for laughing at Macy Gray during the national anthem. That has been her tone forever, so why was that funny?’

Some users compared Gray’s outing to that of Fergie in 2018, as the Black Eyed Peas songstress sang a slow, blues-infused version of the song, with NBA star Draymond Green’s reaction going viral.

Following her outing, Fergie claimed she had taken an experimental approach that landed awkwardly.

‘I’ve always been honored and proud to perform the national anthem and last night I wanted to try something special for the NBA,’ Fergie said in a statement following the performance.

‘I’m a risk taker artistically, but clearly this rendition didn’t strike the intended tone. I love this country and honestly tried my best.’

One user wondered why James reacted as he had, pointing out that Gray had delivered in her performance 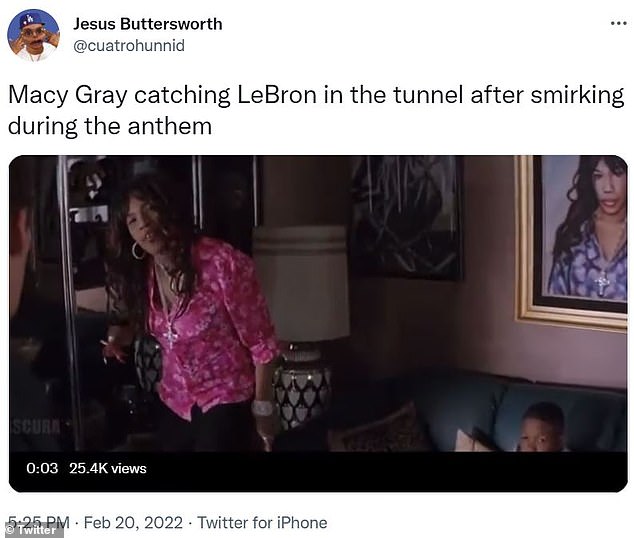 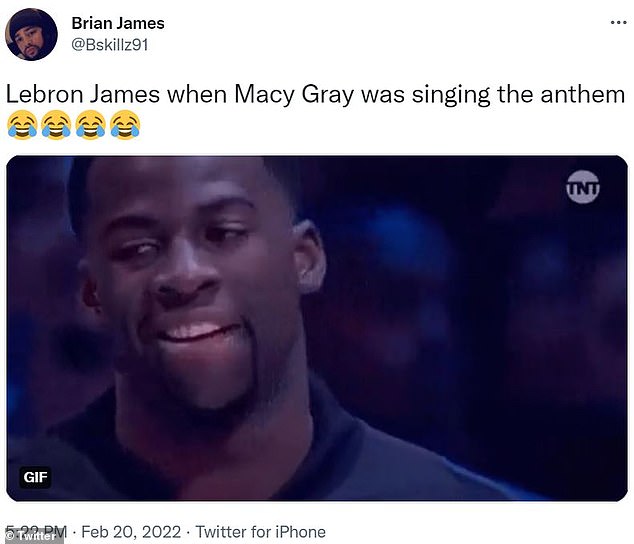 Some users compared Gray’s outing to that of Fergie in 2018, and how Draymond Green reacted to it

James hit the game-winning shot in Sunday’s contest, which also honored Kobe Bryant and the 75th anniversary team for the NBA.

He said it was an humbling experience to be in the presence of legends who were honored during a halftime show.

‘Allen Iverson and Jason Kidd, Gary Payton, Michael Jordan, Magic Johnson, Oscar Robertson,’ James said, according to the AP. ‘To see those guys today and then be on stage with those guys – it’s just crazy.

‘Every time they would announce another name, I didn’t even get an opportunity to like rejoice in the player that they had named. It was, like, Gary Payton. I was, like, wow.! Then J Kidd showed up, and then A.I. (Allen Iverson) showed up, and then it was D. Wade, C.P. (Chris Paul), and Steph (Curry). I was just tripped out.’

James was lauded by the hometown crowd in Cleveland, where he began his career and landed the franchise’s only championship in 2016.