Lauren Goodger, 34, shares a New Year’s Eve kiss with Charles Drury, 23, as they step out for a walk after hinting she wants ‘marriage and babies’

She made a not-so-subtle hint that she wants ‘marriage and family’ with her current boyfriend Charles Drury, 23.

And Lauren Goodger shared a New Year’s Eve kiss with her beau as they stepped out for a cosy walk in Essex on Thursday morning.

The former TOWIE star, 34, cheekily grabbed the electrician’s bottom as she radiated happiness. 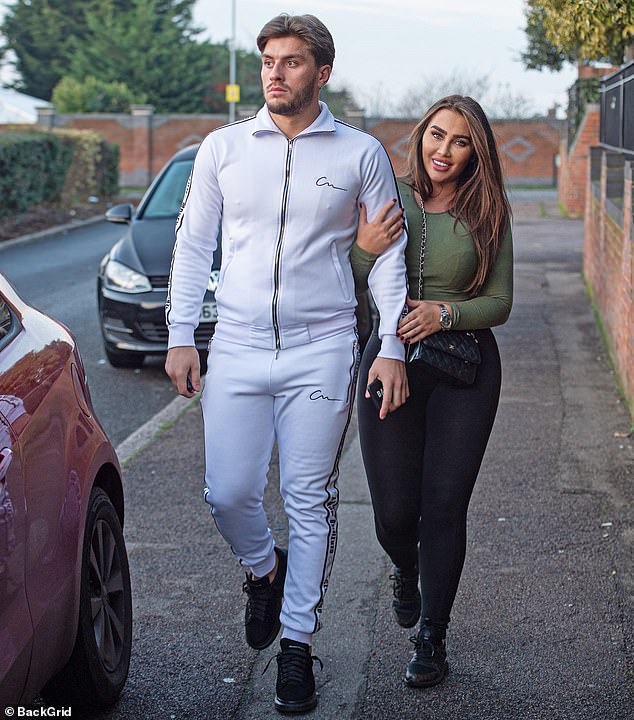 Happy: Lauren Goodger, 34, radiated happiness as she stepped out for a cosy walk with her boyfriend Charles Drury, 23, in Essex on Thursday morning

The TV personality cut a casual figure in black leggings which she paired with a green long-sleeved, cropped top and black trainers.

She accessorised simply with a silver watch and a small Chanel cross-body bag, manicuring her nails a dark, festive red.

Charles sported a white Certified Money tracksuit, which he paired with black trainers.

He climbed behind the drivers seat in a black car, as Lauren slid into the passenger seat alongside him. 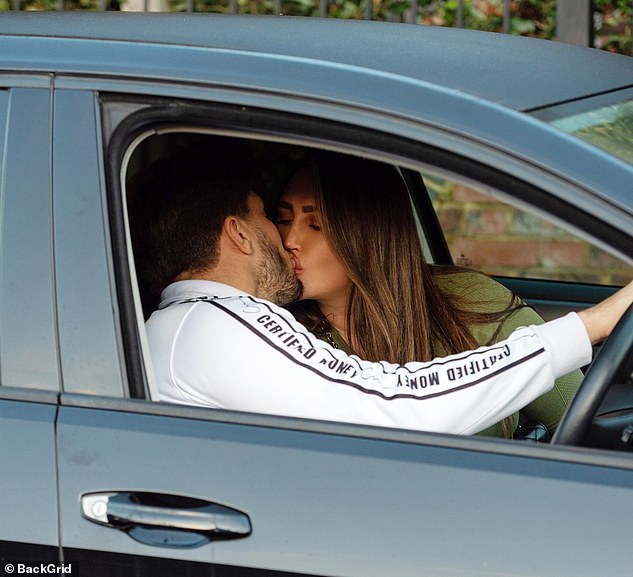 NYE: The former TOWIE star shared a sweet kiss with the electrician as they prepared to celebrate New Year’s Eve together for the first time 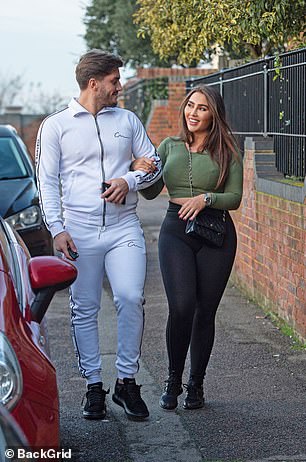 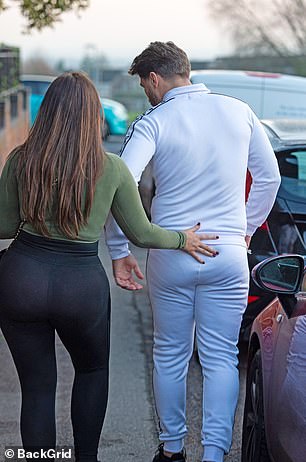 Cheeky! The Celebs Go Dating star cut a casual figure in black leggings and a green cropped, long-sleeved top as she cheekily grabbed the technician’s bottom

Before setting off, the couple shared a New Year’s Eve kiss in the car.

Lauren rose to fame on The Only Way Is Essex while in a 12-year relationship with ex-boyfriend Mark Wright, and has since dated jailbirds Jake McLean and Joey Morrison.

On Wednesday Lauren reflected on the various loves of her life on her Instagram Stories, making a not-so-subtle hint that she wants ‘marriage and family’ with Charles.

Sharing four black and white slides, the Celebs Go Dating star told her fans: ‘We fall in love with 3 people in our lifetime. Each one for a specific reason…’ 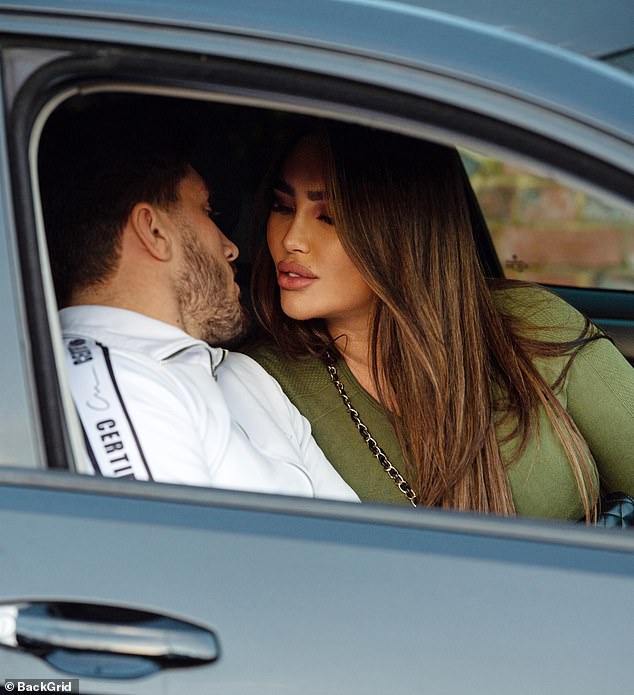 One for the road: Charles climbed into the driver’s seat and Lauren leaned over for a New Year’s Eve kiss before they set off

Reminiscing over her first love, the reality star insisted that ‘it was’ love, despite sometimes feeling otherwise when looking back at the relationship.

The poem read: ‘First love: This love often happens at a young age. You eventually grow apart or call it quits over silly things.

‘When you get older you may look back and think it wasn’t love. But the truth is, it was. It was love for what you knew it to be. Remember: there [are] different depths of love.’

Moving to her second love, Lauren spoke of pain, abuse and damage suffered, but also the growth and learning which came from the relationship. 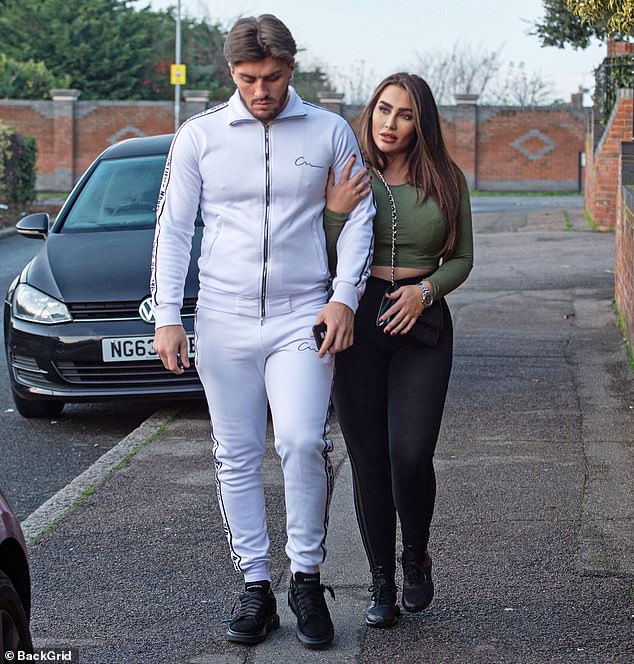 Stunning! Lauren accessorised simply with a silver watch and a small Chanel cross-body bag, manicuring her nails a dark, festive red, as she cuddled up to her boyfriend

The slide read: ‘Second love: The hard one. This love teaches us lesson[s] and makes us stronger.

‘This love includes great pain, lies, betrayal, abuse, drama and damage. But this is the one where we grow. We realize what we love about love  and what we don’t love about love.

‘Now we know the difference between good and bad humans. Now we become closed, careful, cautious, and considerate. We know exactly what we want and don’t want.

Finally, Lauren shared about slide about her third love, where she made it clear that she wants to settle down and have children. 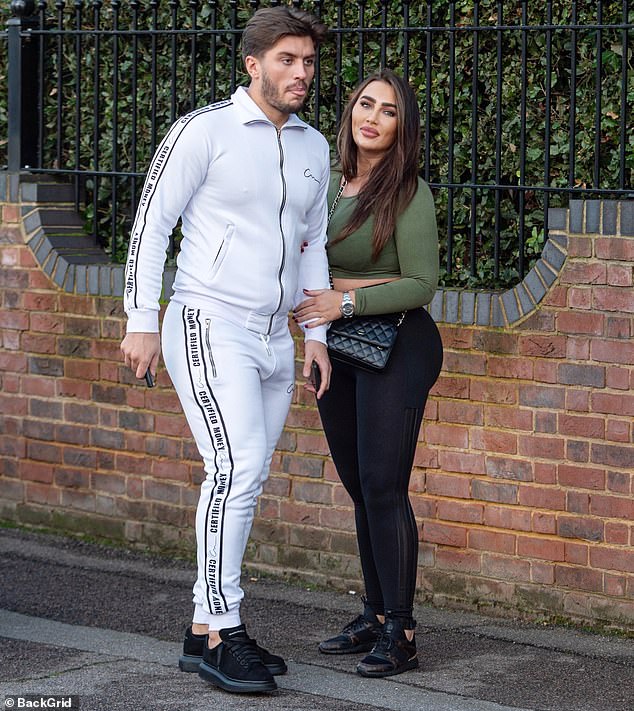 The last slide read: ‘Third love: This one comes blindly. No warning. It creeps up on you silently. You don’t go looking for this love. It comes to you.

‘You can put up ANY wall. you want, it will be broke[n] down. You’ll find yourself caring about that person without trying.

‘They look nothing like your usual crush types, but you get lost in their eyes daily. You see beauty in their imperfections. You hide nothing from them.

‘You want marriage and family with them. You thank the universe for them. You truly love them.’

Lauren was previously engaged to her TOWIE co-star Mark Wright, 34, whom she dated for more than a decade. 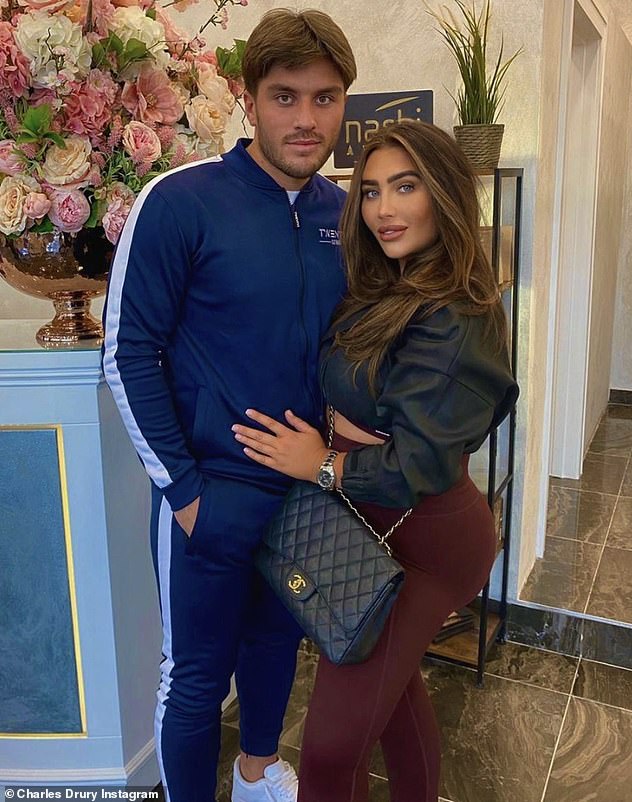 Babies and wedding bells? On Wednesday, Lauren made a not-so-subtle hint that she wants ‘marriage and family’ with her current toyboy Charles

The exes cut off their engagement in May 2011, just five months after Mark’s proposal, and the presenter went on to marry TV darling Michelle Keegan, 33.

Lauren has since accused her ex Mark and his wife Michelle of ‘blanking her’ and spoken about the incredible sexual energy she and her ex had.

They split for the first time in 2013 before rekindling their romance two years later, and then broke up again just months later in October 2015.

Shortly after their final split, in May 2016, Lauren told OK! magazine of her former jailbird ex: ‘I fell out of love with him. 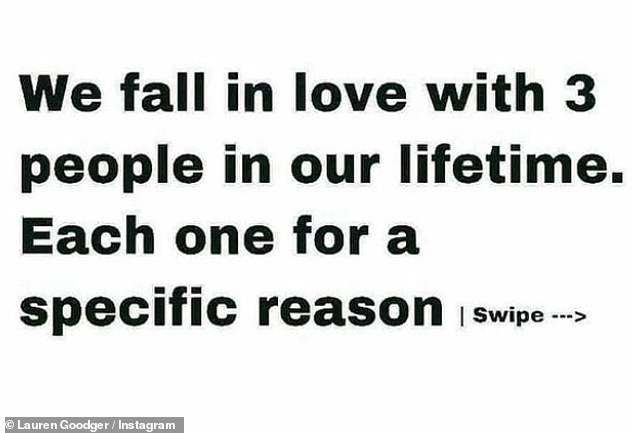 Poetic: Sharing four black and white slides, Lauren told her fans about each ‘love’ in detail 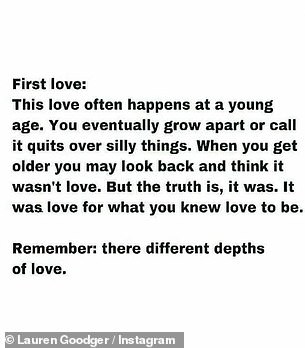 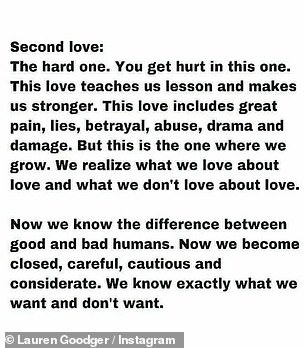 Reminiscing: Thinking back to her first two loves, the TOWIE star spoke of growing apart, pain, abuse and damage suffered 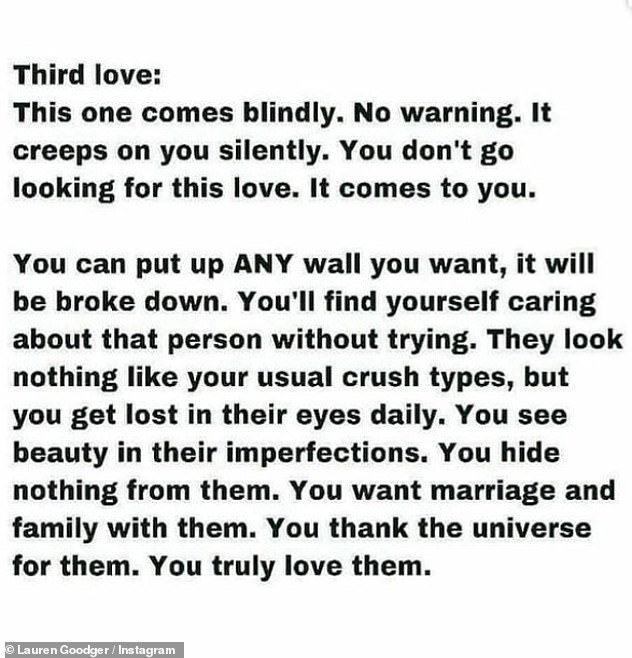 Current romance: Finally, Lauren shared about slide about her third love, where she made it clear that she wants to settle down and have children

‘I know some people say you wake up one day and things click, but that didn’t happen to me; it was a gradual thing.

‘The relationship was quite hard. I felt like I was the one doing everything and putting the effort in. I’m at the age where I’d like to have children but Jake isn’t the sort of man I’d want to do it with.’

Jake, who was 18 at the time, was jailed for three-and-a-half years after conning his way into a mother’s house two days before Christmas in 2006, overpowering her before a masked gang ran in and raided the family home.

Jake was part of vicious criminal gang and it is believed he only served half of his sentence, he is since said to have fathered a child with another woman. 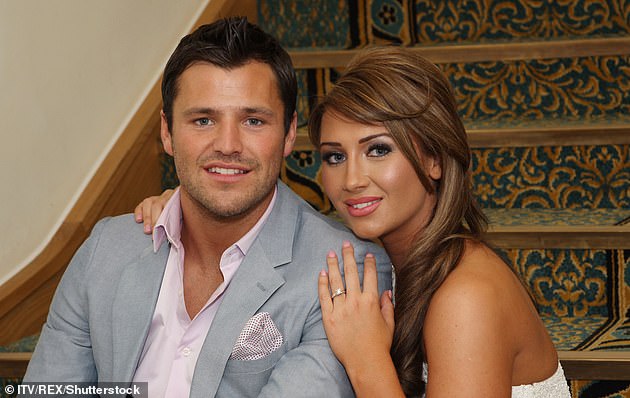 Childhood sweetheart: Lauren was previously engaged to her TOWIE co-star Mark Wright, 34, whom dated for more than a decade [pictured in 2011]

After splitting from Jake, Lauren struck up a relationship with another convict, Joey Morrison, but the couple went their separate ways two years later, in 2018, despite Lauren waiting for him while he served time behind bars.

Joey was given a 16-year prison sentence for a violent offence but was released after nine years – Lauren and Joey split close to his release date.

In 2019, Lauren opened up about her two year romance with Joey, who was sentenced for drug related crimes, saying: ‘My ex was my biggest mistake. I wasted two years when I could have been dating. I wish I hadn’t waited for him to come out.’

Writing previously in new! magazine of her relationship with Joey, she said: ‘I regret giving two and a half years of my life to someone who was in jail only for him to come out and not be what I thought. 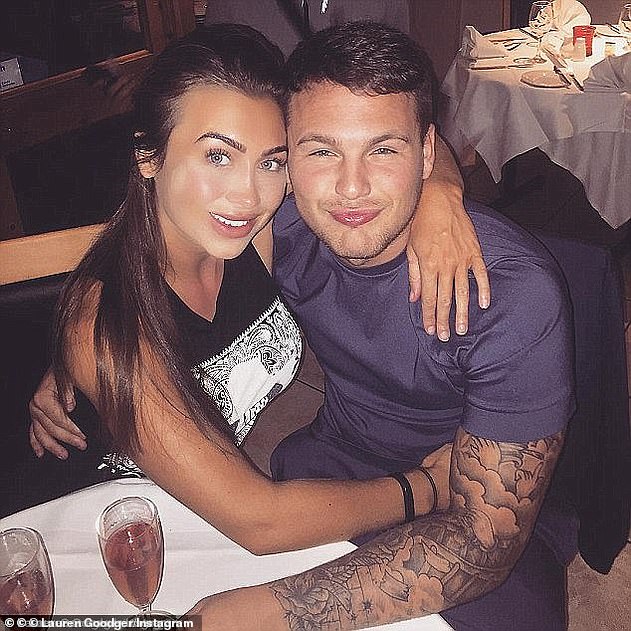 Jailbird ex: Lauren then dated Jake McLean on and off from 2012 until 2016. They split in 2013 before rekindling their romance two years later, and then broke up again months later in 2015

‘I thought we were going to get a house, get married and have kids. I regret the time I’ve wasted.’

Lauren is now loved-up with Charles, who previously dated Katie Price in 2019 following her engagement breakdown to Kris Boyson.

The TOWIE star and her new beau – who is 11 years her junior – have been dating since early October and regularly flaunt their romance on social media.

Katie is now in a new relationship with Carl Woods, 31, who first found fame during an appearance on ITV’s Love Island. 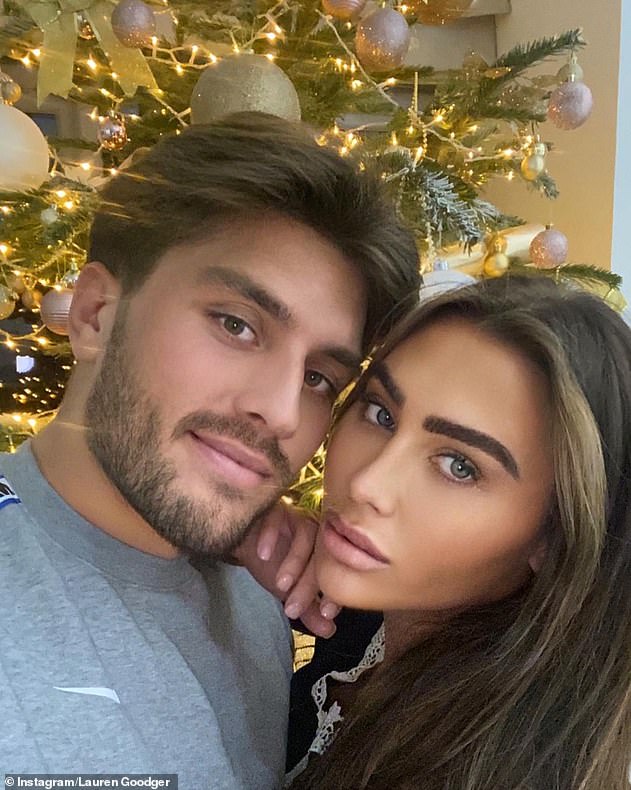 Loved-up: Lauren and Charles – who is 11 years her junior – have been dating since early October and regularly flaunt their romance on social media